Greater Manifestations for the Ethermancer 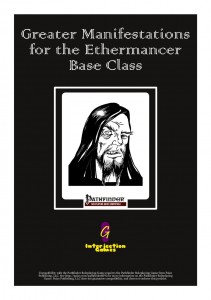 This expansion for the ethermancer is 10 pages long, 1 page front cover, 1 page SRD, leaving us with 8 pages of content, so let’s take a look, shall we?

We kick off this supplement with a short introduction that explains the matter at hand – essentially, the idea is to create greater manifestations as a way to nova for the ethermancer, granting x/day abilities (in contrast to the perpetual casting of the base class). These abilities impose a tax on the class, though – but more on that later.

We also are in for 6 new feats – one being particularly interesting – the bombardier feat allows you to deal +2d6 bonus damage with greater blast-based manifestations if you also managed to hit regular AC, not just touch AC. I’m looking forward to seeing how this one handles in-game (since one of my players currently plays an ethermancer). The feat Greater Manifestation Study allows you to replace a manifestation known of 2nd level or greater with a greater manifestation of the same level and heart, much like the new philosophy. Another feat allows you to choose an etherheart and use a greater manifestation of said etherheart a second time after you’ve expended it. Now Shed Alteration is a feat I know my player will take, for it allows you to dismiss the otherwise un-dismissible alteration manifestation for a point cost, while shed gifts allows you to do the same for bestow effects. Finally, weaponized shedding allows you to deal damage to your immediate surrounding when dismissing alterations and to the target, when dismissing bestow manifestations. Note though that this feat, while powerful, also is a double-edged sword – it works AUTOMATICALLY. No choice there – once taken, you ALWAYS inflict that damage. Interesting!

So what can those greater manifestations do? Well, what about one that reduces the next regular etherspell’s cost to 0? Sound relatively…regular, but once you start thinking about the way you have to budget your etherspells, this becomes rather interesting. At ethermancer 5, there is also the option…to create a FRIGGIN BLACK HOLE. Yes, an insta-death orb that draws targets inside, obliterating one target totally. On the slightly nitpicky side, the manifestation does not specify whether the ethermancer can choose which target to annihilate – this is relevant since the black hole does not discriminate between targets – allies and even the ethermancer himself can potentially be destroyed by the forces unleashed. Personally, I’ll settle for a random-determination…just to drive home that some forces ought to be respected (and since I consider it cooler that way) – not a deal-breaker, mind you, just a minor imperfection in an otherwise cool ability.

rather cool – clockwork universe. As a level 6 greater manifestation, it’s the apex of power and damn, does it feel like it! First, you choose a star (from 5) – each star has a an EP-cost (which may be 0, though) and modifies the maximum amount of satellites available in a given system or provides a different passive benefit. You may also throw these stars as splash weapons to deal rather unpleasant amounts of damage on the target square. A given solar system can also contain up to 1/2 caster level, rounded down, satellites, chosen from an array of 8 different types. The respective satellites have their own restrictions. Just to give you an impression here – if your model contains an inhabited planet, the planet replies to a thrown satellite by launching a miniature mothership (!!!!) you can direct to attack your foes. Yes. If you’re in any way like me, that not only made you chuckle, but rather grin from ear to ear. ^^ Have I mentioned that you can actually grant this manifestation to another character if you have the right feat? Yes. Passive and active, very modular, iconic in imagery – in one word: Glorious.

A maximized etherspell, an insta-kill death effect, a bestow that stuns foes with unearthly screams…cool. What’s truly glorious would be Erase Physics – choose an element, erase it from the creature. Spell-like abilities, supernatural abilities, resistance, damage – all gone. And yes, the wording is concise enough to make that work and yes, additional conditions etc. remain. There is also a powerful auto-buff herein and a greater manifestation to blast multiple blasts at once…Awesome.

Editing and formatting are top-notch, I didn’t notice any significant glitches. Layout adheres to Interjection Games’ 2-column b/w-standard. The pdf has no bookmarks, but doesn’t necessarily need them at this length.

So if you’ve been following my reviews, you’ll be asking…why doesn’t Endzeitgeist complain about the insta-death effects? Because they’re more limited than regular spells, extremely high level and are based on sphere of annihilation as a model. So no matter which way I look at it, I can’t complain. Speaking of which – the galaxy model is glorious. This pdf made my ethermancer player grin from ear to ear and I’m the same – this pdf offers some rather cool, new options for the ethermancer that improve the base-class with thoroughly iconic, cool tricks that just OOZE awesomeness and should be considered a must-buy for ethermancer-players and those interested in the class. And if you haven’t taken a look at Bradley Crouch’s ethermancer, this expansion is an excellent additional reason to do so. Final verdict? 5 stars + seal of approval.

You can get this awesome little expansion here on OBS!