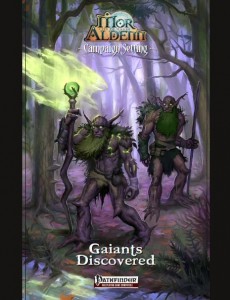 This pdf is 16 pages long, 1 page front cover, 1 page editorial (containing the introduction as well, though!) and 1 page SRD, leaving 13 pages to cover the new Gaiant-race, so let’s check them out, shall we?

The gaiants are arace of tree-like humanoids, somewhat similar to treants, but more humanoid in both demeanor and culture while remaining very distinct entities – the pdf begins by elaborating their concepts of “welcome” and “unwelcome” with regards to the woods they guard and other humanoids as well as their society and culture, which is interesting: Defined by their extremely long lifespans, their nomadic lifestyle might seem like a settled one to observers and features and interesting take on the circle of life. The section also comes with a lore-section.
On the crunch-side, they get +2 to Con and Cha, -2 to Dex, low-light vision, +2 to heal and knowledge (nature), +4 to CMD against bull rush and the option to spend a move action to gain another +4, +2 natural armor, slow base-speed, large size, belong to the giant-subtype but count as fey (and have no racial hit-dice), can use Cha instead of Wis or Int to determine their spellcasting where applicable and the amaranthine quality. Gaiants casting as a Cha-based class get +1 caster-level with regards to their spells.
The latter is rather interesting, as Gaiants don’t need to sleep, but rather stay rooted for one day per lunar month. They also don’t suffer from age-penalties, being essentially eternal and thus making for rather interesting perspectives on things.

I already mentioned the Cha-substitution for any spellcasting, with which I have a problem. The attribute-substitution screams “abuse the hell out of me” and potentially makes for some awkward builds – how would e.g. Wizards get their arcane discoveries if not via their intellect? It also blurs the lines between classes, not generally something I’d personally advocate.

I’m missing the age, height & weight tables for the gaiants, especially the weight being something I’d really like to know – after all, lumbering tree-like humanoids are supposed to be heavy and what happens when they try to cross a rope-bridge?

The 4 alternate racial traits are rather on the upper scale of the power-side, enabling them to get a 1d12 natural attack, the ability to disguise themselves as treants and minor spellcasting as well as the ability to draw knowledge from nature. This natural attack means that gaiants deal more unarmed damage than 11th-level monks (who only get d10). This is plain wrong and not something I’d allow in my campaign.

The 5 new spells on the other hand were rather interesting – I especially liked bladewind gyre, which gives you minor DR and lets you lower the remaining duration of the spell for the option to attack foes at range via razor-sharp blades. The Hinbernation-spell, though, is weird: It grants you tree-shape and awareness, healing and restoration and has a duration of several years. You can dismiss the spell, but lose the healing properties. If you get damaged, you instead are healed only 2d8. I’m not sure if I get this spell right. I assume that you get to keep healing and restoration if you wait for the duration to naturally expire or whether the benefits end with the spell. Seeing that casting time is 10 minutes, the spell can’t really be utilized to save a dying gaiant, but since I like the idea and its narrative potential (lumberjacks awakening ancient, angry gaiants anyone?), I’d really enjoy some clarification there in a possible product update.

A list for new witch patron spells for all the seasons is included as well as 5 neat magic items, one of which is the tanglefoot bag’s big brother. I liked all of the items, none seemed op.

Gaiants also get access to 9 racial feats – Bards get some nice love and can slightly expand their spell-lists via feats and use their songs to affect plants and the gaiants magic can be increased in spell-levels and DCs, but WITHOUT stacking with other increasing factors, ensuring that they have another access to magic but without unbalancing the whole system. My favorite feat, though, would be “Shed Bark” – this feat ROCKS. It lets you sacrifice your natural armor bonus to subtract lvlx2 points of damage from an attack. The bark only returns after your next monthly rest. This feat is awesome, oozes flavor and just rocks – well done!

The pdf closes by providing some gaiant NPCs – a sorceress 7, a barbarian 6, an undying skeletal champion gaiant sorcerer 8 and two generic gaiants. The NPCs are surprisingly well-written and especially the undead gaiant just begs to be used (or rather inflicted upon) your PCs.

Conclusion:
Editing could have been a bit better, I noticed some glitches and in e.g. the hibernate-spell was not sure I got right what the spell is supposed to do. Formatting is nice, though the racial information of the gaiants is on a black page with white ink, which, while nice-looking, makes for more printer-drain than necessary. The pdf has unfortunately no bookmarks. The layout is beautiful, though – as I’ve come to expect from Headless Hydra games, we get a clear two-column b/w-layout supplemented with BEAUTIFUL b/w-artworks – credit where credit is due.

This is hard to rate. I thought I would not like the gaiant and the opposite is the case – the writing is good enough and the crunch is unique enough to make the race stand out and feel different. Actually, both NPCs, race, spells and feats conspire to make this race feel truly different, which is quite an achievement. On the other hand, though, there are some blemishes that are simply unnecessary: The lack of an age, height and weight table is one of them (I get the absence of age, them being quasi-immortal, but weight and height are important for cramped dungeons, tight ropes, fragile floors etc.) and the ability to substitute Cha for other spellcasting attributes is another one. The minor problems with exact wordings thankfully are rare but serve to further undermine what otherwise would be a stellar racial supplement.

I actually came to really like the unique feel, the old-world fluff of the gaiants, but I fear that aforementioned blemishes make it impossible for me to rate this as high as I’d like to. While generally, the ideas herein are great, a bit of fine-tuning could have made this a full-blown 5 star-file. As written, though, I have to take aforementioned problems into account as well as the low price. My final verdict will be 3.5 stars, rounded down to 3 due to potential balance concerns. If you feel like you can handle them, I’d suggest checking this out – for you, this might be a 4-star file.