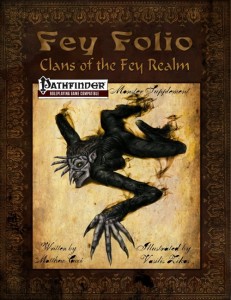 The first thing you’ll notice about this pdf is that it is gorgeous full-color and that it’s extensively bookmarked, high hopes, so let’s dive in.

The first page gives us an introduction to the concept of the fey as well as a table listing the quick-reference glyph system.

The fey herein are:

-Dullahan (CR 7):  A fey take on the headless horseman, two additional stat-blocks are provided: 1 for the Dullahan Dreadknight (CR 9) and for their dark mares (CR 6). Their artwork kicks ass and is on par with what you can see in Paizo products.

-Erlking (CR 2): Kidnapper fey based on the ballad by Johann Wolfgang von Goethe, their artwork can be seen on the cover and, again, rocks! They have abilities to shroud themselves from sight and kidnap people. As a German who grew up learning the ballad by Goethe by hard, I love this hommage to the disturbing song.

-Fachen (CR 6): Strong, deformed soldiers of the Fey-lord Jack-in-Irons, I like how they got a weakness for adventurers to exploit: Fighting smart should be rewarded. They also get a CR 9 sorceror. Their artwork first threw me off, but after printing it out and taking it in, I’ve come to like it.

-Jack-in-Irons (CR 21): An extremely powerful fey king, broken and chained, Jack-in-Irons is interesting due to one fact: He fits nicely in with already established fey lore in your game. Due to e.g. Oberon already existing in my game, I can insert him nevertheless, as his portfolio does not conflict with Oberon’s. On the downside, though, his AC is low for his CR and his artwork reminded me more of a giant than of a fey. It’s still a good artwork, though.

-Kapre (CR 4): A kind of umanoid treant, this creatures make for interesting takes on the Green Man. Their artwork is nice.

-Rarog (CR 13): Not actually a fey, but an elemental outsider, this fire/wind-aligned creature nevertheless makes for a great creature to associate e.g. with the scorching Sirocco. The artwork, again, rocks.

-Lean Sidhe (CR 7) & Bean Sidhe (CR 9): Beautiful, alluring emodiments of cathartic moments, the capricious Lean Sidhe may drain mortals of their creativity. Their dark sisters, the Bean Sidhe, born of grief and misery, get completely different abilities. Both share a beautiful artwork, though I would have liked to see a separate one for the Bean Sidhe.

-Spriggan (Cr 1/3): Ugly little creatures who worship Jack-in-Irons, their picture is actually the first picture of a Spriggan in any incarnation of the game I considered creepy. Well done! They come with information to make Spriggan characters yourself.

-Spring-heel Jack (CR 5):  Urban, suave swashbucklers, their artwork is cool and could also be used for iconic Elven duelists. As a fan of urban settings, they’ll see some use in my campaign.

-Sylph (CR 2):  A cute, butterfly-winged fey, Sylphs actually get another great piece of artwork that makes them look not only cute but resolute at the same time.

-Vodnik (CR 3): An ugly little creature that drowns its victims and has some nice additional information (a mini-template) to make a variant bog-troll/vodnik hybrid.

-Yallery (CR 6): An embodiment of apathy and laziness, these  urchin-like fey have some interesting abilities: Beggar’s Idle lets them increase the duration of spell-like effects by 1d6 rounds on a successful attack. Nice.

After that, we get 2 pages containing both tips for the DM to properly play fey as well as a hook for a campaign centering on the new fey.

I’ve commented a lot on the artwork and rightly so – this book ranks among the most beautiful 3pp-books I’ve ever seen. Editing and formatting are top-notch and I didn’t notice any mistakes. All of the fey are iconic and feature at least one signature ability that makes them stand out. I’m quite frankly at a loss to say anything negative about this book – the only true criticism I can provide is that a printer-friendly version would have been nice to have.  Apart from that, I can only say: I want more! I love fey and this book actually gets them, resulting in a 5-star final verdict + seal of approval. Well done!