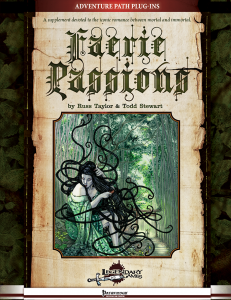 This supplement is 18 pages long, 1 page front cover, 1 page editorial/SRD, 1 page ToC, 1 page how-to-use, 1 page advertisement and 1 page back cover, leaving us with 12 pages of content, so let’s take a look, shall we?

After a 1-page introduction to the matter at hand, we are introduced to something vital to understand the content herein – the mindset of the fey: We essentially get advice for DMs to portray fey and their interaction with mortals and PCs in particular: The alien nature of fey and their capacity to misinterpret mortals is reflected by optional supplemental rules that govern the interaction of fey and mortals and reflect the anxieties of such a clash of mindsets and cultures. Furthermore, the fey’s sense of beauty and how it governs their actions is also described and supplemented – and yes, fey make start developing an obsession to “fix” your own sensibilities…which may be annoying with humans, but in the case of fey, it may become downright cruel and disturbing… Speaking of which – the arrogance and weird logic of fey offers quite an array of storytelling potential and examples via a rusalka and her taboos on drowning victims are3 covered – oh, and it should be noted that trying to influence fey via mundane and magical means can be rather problematic and fire back upon the mortals that attempt it. The aspects of faerie whimsy, potential sheer heartlessness and the time-honored tradition of humbling proud mortals – all of these are covered herein and come with short, easily inserted rules that add a layer of depth to the interaction with fey.

Now onwards to the birds & bees of fey – examples from true fairy-tale love to forced ravishments of woodcutters by dryads to the stable of lovers held by noble fey, we get some intriguing short summaries of central tropes to the fey’s lore and their potentially child-stealing/exchanging ways also merit some further focus by the book and help prospective DMs with advice on properly adding interesting features to the changelings or to create more unique offspring with the ARG. The book also offers a fine array of awesome recommendations for further reading, both obvious and lesser known. having read the majority of these myself, I can attest to the inspiring nature of these recommendations. Now if you’re like me, you’ll consider the basic fey-bloodline too generic to reflect all possible ancestors and hence, herein, we get an array of alternate bloodlines for sorcerors that reflect the respective parents better -now all of these bloodlines make the respective character counts as fey for the purpose of spells and abilities as well as archetypes – i.e. these are considered variants of the fey bloodline.

First would be the Dryad, which of course gets plant and forest-related abilities and bark-like skin at later levels. Nymph-blooded sorcerors – this one is, of course, rather focused on charm and grace and allows you to temporarily add a significant bonus to AC temporarily and even gain an aura that dazzles those that look directly at you – thankfully suppressible, though. Nereid-blooded sorcerors may hit adversaries with cold water spouts, become invisible and get a nice array of water-related spells. Among the more uncommon bloodlines would be the Norn, who may provide detrimental or beneficial modifications to rolls and even enforce rerolls. Satyr-blooded sorceros gain a touch-attack that has targets laugh uncontrollably and may also substitute the playing of wind instruments for verbal and somatic components – cool idea.

We also get two new archetypes – the Feyfriend Druid who may be of chaotic alignment, has an array of fey-themed spells added to his/her spell-list, becomes immune to mind-influencing effects and may actually turn into giant form or take the form of fey at later levels. The opposite would be teh Fey Hunter Ranger, who gets iron will, can extend saves versus fey to nearby allies, allow them to reroll saves versus mind-influencing effects and even make attacks that can dispel the magic of fey creatures and see past the illusions of the fey.

Editing and formatting, as we’ve come to expect from legendary Games, is top-notch. Layout adheres to LG’s 2-column full-color standard and the pdf comes in two versions, with one being more printer-friendly. The pdf offers two gorgeous one-page illustrations and a smaller picture of also superb quality, all by Mike Lowe. The pdf comes fully bookmarked and hyperlinked for your convenience.

Russ Taylor and Todd Stewart should probably ring some bells name-wise and as such it is no surprise that the superb ecology-style beginning of the romance and interaction between fey and mortals is a joy to read and offers some neat ideas and insights. The bloodlines could easily have drifted into the boring-territory, but thanks to a varied and non-core-rules-using spell-selection as well as some unique abilities, manage to evade that fate. The archetypes are both iconic and fun, with especially the fey hunter being extremely useful to have on your side when challenging the fey. That being said, by now the standard for fey-related supplements is HIGH. Kobold Press’ Midgard has delivered perhaps one of the best modules ever as well as copious information in that regard. Adventure-a-week.com’s Snow-White-Saga, while not directly and exclusively dealing with fey does indeed  breathe the spirit and finally, Rite Publishing’s Convergent Paths: Fey Archetypes and In the Company of Fey offer a cool race/racial paragon class and one of the best barbarian archetypes ever crafted. Whereas the Midgard and AaW-supplements are more about the tone, especially Rite’s offerings lend themselves well for direct comparison. Convergent Paths: Fey Archetypes especially would spring to mind – and while it has parts I consider not 100% compelling, it feels a bit more…daring. While I’m not a big fan of “The Laughing Man”, said archetype feels more innovative, more daring, more alien than those herein.

In fact, I wondered for quite some time and then got it – this supplement is very conservative in its design-choices: It’s well-crafted, flawless even in its respective content, but ironically it does not inspire this sense of weirdness, does not reflect the alienness in the crunch. I also consider the lack of alternate racial traits to modify base races according to parent-fey or alternate racial traits an oversight in this – either that or some actual examples of how to court varying fey (with skills or the like), a select set of taboos – either would have improved the book. Think of Catherynne M. Valente’s Gaselli and the tale of the errant Taglio (Orphan’s Tales Book 2, by the way) on how alien mindsets can completely transform relations between races and challenge our preconceptions. In the end, this pdf feels like a nice offering, but also woefully incomplete and perhaps a tad bit too conservative for the imagination-inciting matter it covers.

In the end, Faerie Passions is not a bad book by any stretch and actually has great content herein, but it also didn’t manage to either blow me away or incite its eponymous passion in me to include components of it in my game, apart from the fluff. In the end, my final verdict will clock in at 3.5 stars, rounded up to 4 for the purpose of this platform.