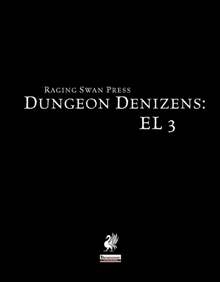 The third installment of the Dungeon Denizen-series deals with EL 3 encounters and is 13 pages long, 1 page front cover, 1 page advertisement, 2 pages editorial, 1 page ToC/foreword, 1 page SRD, 1 page back cover, leaving us with 6 pages of content, so let us take a look, shall we?

By now I assume you’re familiar with the formula of the series – if not, here’s the cliffnotes: Essentially, we get 3 d12-tables, with each entry of a table not only mentioning a creature to encounter, but also a rather extensive fluff-text you can use to paraphrase encounters, act as dressing or inspire you to create living dungeon environments. While default enemies straight from the bestiaries are included in these pdfs, there usually also are some non-standard entries, which hence come with full statblocks.

The EL3-installment kicks off with the dungeon area-table, which already is a neat intro to what to expect – take e.g. advanced and young simple creature templates applied, but even the standard creatures come with interesting angles – for example the skulking doppelganger… Among the unique creatures, we get a minotaur skeleton as well as a witch (nice!) specialized in controlling others who lives underground with her enslaved harem of men…

If you’re like me and enjoyed paizo’s take on adherer (in the glorious Misfit Monsters Redeemed), you’ll be happy to hear that an adherer features among the encounters specially designed for cavern/underdark areas. A thievish bard and a rogue drow crossbow sniper escaped from the oppressive drow cities also are provided – but my favorite would be the Basilisk Plague Zombie. Yes. Basilisk Plague Zombie. If you’re like me, that put a sinister smile on your face.

The final table, as has become tradition by now, provides wandering monsters – and we actually get a joyfully dysfunctional goblin family, an elder darkmantle and some more interesting ones as well: Take for example a claustrophobic ogre, a mother with her children lost in hostile territory (due to the cruel machinations of a werewolf, an ancient elf looking for a specific mushroom – and even a quickling.

Editing and formatting are top-notch, I didn’t notice any glitches. Layout adheres to RSP’s elegant 2-column b/w-standard and the artworks are stock, but fitting. The pdf comes in two versions, one optimized for the printer and one for screen-use and both are fully bookmarked for your convenience.

Author Alex Connell is hitting his stride with this installment of the series – while I’m still not sure whether the line can stand its ground in the few pages an installment has in higher ELs, at EL3 it works exceedingly well and actually better than in EL2’s installment – the creatures and NPCs provided offer quite a variety of cool creatures to make this installment work well, hitting the perfect balance between the weird and common and I’m actually rather impressed at the amount of content this pdf has crammed into its pages – a solid, neat addition to the series and definitely a pdf that will enrich your dungeoneering experience. As such, I’ll gladly rate this 5 stars plus seal of approval.

Get this neat collection of encounters here on on OBS and here on d20pfsrd.com!