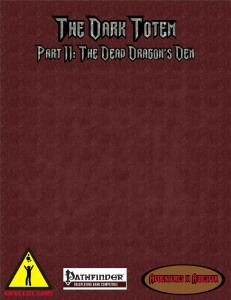 The revised edition of the Dark Totem Pt 2 is 51 pages long, 1 page front cover, 1 page editorial, 1 page ToC,1 page SRD, leaving us with a massive 48 pages of content, so let’s take a look, shall we?

If you have avoided Rocks Fall Games so far – rest assured that this has NOTHING in common with their first offerings. Following on the heels of the excellent revision of the First Dark Totem module, we actually get new maps, content etc. in this one as well – and yes, even artwork. That out of the way, this review necessarily contains SPOILERS.

Still here? All right! The PCs have acquired this weird Dark Totem in the last adventure and now probably are doing some massive research on the enigmatic item in their home-base city of Varatolo – which comes with several entries of relevant shops and their owners, adding essentially a nice mini-gazetteer-section to the town, thus bringing it to life (or serving as a template for you to insert into towns of your own!) – but more on that life: Unlike many modules, this one actually feature several so-called “Daring Deeds”, i.e. encounters that you can place in the module to bring to life what’s going on beyond the module’s main plot: Wizards charming bouncers in the tavern and an exiled ogre holding a pet rust monster who thinks his gnomish captive can actually pass gems from his bowels (including a map of the cave) to foolhardy idiots carrying a troll’s head into their tavern (and having the troll regenerate – pissed and hungry!) to a halfling wanting to cheat at gnome toss by infiltrating the favorite tavern game of the Blind Basilisk and finally a jealous suitor of one of the tavern’s maids make for various diversions beyond killing x monsters – kudos for going the extra mile there!

But on towards the meat of the module: The PCs are called towards an alley via a missive (provided as a hand-out) – and find a description of them and the totem on the assailants, the possible fugitive finding a grisly end nailed to their haunt, mutilated and desecrated. In the aftermath of this assualt on them, they are contacted by The Prime Wizard, who tells them that the idol is the prison of an unknown entity – originally found in the now derelict Westgaard Mine, where once the legendary dragon “Verbrennung” (roughly means “incineration”) had its lair. Unbeknown to teh PCs (or anyone else, for that matter), death as not the end for said dragons and since then, a tribe of former slave kobolds have made the mine their lair, worshipping the draconic skeletal champion as a sort of deity.

Suffice to say, the PCs will have to contend with various traps and actually SMART fighting kobolds. That’s not where the module shines, though – the central strength of this crawl is the sheer amount of lovingly crafted detail featured here – each and every room has multiple things going for it. Corpses have names and (short) background stories, there are a lot of skills to use and the PC’s adversaries utilize the terrain via barriers, cook disgusting stew etc. – the whole place feels organic, authentic, with all the details truly making the complex come to life – up until the final battle, which rather comes to unlife instead.

After a decisive battle, the last words of the undead dragon are a warning to the PCs versus the dread, dark idol and woe betide them if they don’t find a way to prevent the escape of the imprisoned demon… but that’s another story – for now, teh PCs may gather the lavishly detailed dragon’s hoard and report the name of the entity trapped in the totem to the Prime Wizard – until further adventures await them.

The pdf also comes with a player-friendly version of the map and reprints of all spells used by the opposition, thus not requiring you to do page-flipping.

Editing and formatting are very good, I didn’t notice any significant glitches. Layout adheres to a parchment-colored background with a 2-column standard and red highlights for read-aloud text and the pdf comes in 4(!!!) versions – the regular version and its printer-friendly backgroundless cousin and high quality versions of both. All pdfs come with fully functional bookmarks, though instead of content, they tend to denote the page-number. A minor glitch, but one that slightly impedes their usefulness. The maps are serviceable and finding original pieces of b/w-art in a pdf at this price-point is not something I would have expected – kudos!

The team of Rocks Fall Games (Charles T. Marleau, Kristofer Konkel and Kurt “Morloka” Henry” did the writing here) have created a module that truly breathes, that feels alive – all its details, all its small tidbits, all its “Dressing”, to loan the term as coined by Raging Swan press is excessive without being overbearing: Not lost in the details, but still remaining detailed, this module manages to convey a sense of being “alive”, of feeling authentic, that few modules manage. It’s hard to describe what the true virtues of this module are since it does not reinvent the wheel, nor does it endeavor to do so.  It has potentially dark moments, potentially light-hearted ones and mixes them in a blend that has me admittedly nostalgic for a time where all the bleakness of life haven’t yet crept into the game. Its unpretentiousness makes up a significant part of its charm and hearkens back to the modules I grew up with – and that’s a good thing.

That being said, the writing sometimes wavers a bit – from per se neat writing, the text sometimes stumbles and starts heaping short sentences on another, then returning to form. That being said, there is another factor you should consider: This pdf is ridiculously cheap for the quality and amount of content it provides  – at $2.50, this is a steal indeed and well worth the asking price even if you only want to scavenge the supplemental encounters. Missing my seal of approval only due to the flawed bookmarks and slight inconsistencies in writing, this revised edition is still very much worth a final verdict of 5 stars. Congrats to the Rocks Fall-crew!

You can get this very affordable module here on OBS and here on d20pfsrd.com’s shop!

EDIT: The bookmark-glitch has been fixed.