EZG reviews In the Company of Henge

In the Company of Henge 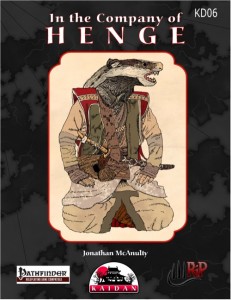 This pdf is 26 pages long, 1 page front cover, 1 page editorial, 1 page ToC, 2 pages of SRD, 5 pages of advertisement and 1 page back cover, leaving 15 pages for the Hengeyokai, so let’s take a look at them!

As has become tradition in the high-quality supplements of the ItC-series, the pdf kicks off with an extensive and aptly-written IC-narrated origin myth and a thorough discussion of the respective clans of Hengeyokai. Wait, clans? Yep, Hengeyokai are actually quite variable, being shapechangers in Japanese mythology that significantly differ from Western mythology in several key aspects: First of all, they are rather cultivated tricksters and not savage beasts. Secondly, while being shapechangers, their appearance in both human, bestial and true form (humanoid with an animal’s head) are constant and not variable. 7 sample clans (dog, badger, cat, rat, monkey, raccoon-dog, hare) that differ in personality as well as racial abilities and preferred alignments are presented, essentially offering 7 distinct basic sets of abilities to choose from – neat!

Apart from these modifiers, the hengeyokai get survival and stealth as class-skill, keen senses, low-light vision and the ability to change into aforementioned shapes. They also can choose two favored classes instead of one and additionally, they are susceptible to cold iron, being forced into their true forms and receiving minor additional damage from them.

True to RiP’s formula of extensive coverage, we also get full details of their stance on religion, height, weight and age tables, 5 alternate racial traits to customize your hengeyokai and details on hengeyokai of the adventuring professions. All classes from the core-rules and APG get their own little paragraph as well as specific name to make them more appropriate for an Asian setting like Kaidan, but Magus, Gunslinger, Samurai and Ninja from UM and UC are not covered. 9 new favored class options are provided, though, as well as 3 new class archetypes:

The Henge Emishi (Barbarian) who gets a bite attack and focuses on fast movement, the Henge-Kannushi (Druid) who gains a bond with a shrine and the Kami of the land – a quite cool take on druids in general. The final archetype is the Henge Matagi, a ranger-archetype who bonds not with animals, but with forests in general, gleaning knowledge from the leaves and branches.

Of course, we also get a new 20-level-racial paragon class, the Mushakemono: The Mushakemono gets d8, 6+Int skills per level, 3/4 BAB, good ref and will (?) saves, proficiency with simple and martial weapons, light and medium armor and up to +4d6 sneak attack, classifying him as a skirmisher.

While at first glance, the parallels to the rogue-class are evident, the array of henge tricks (9 available) you get to choose from as well as the advanced henge tricks (6 are provided) make for a distinct playing experience beyond the traditional rogue: From improvements of shapechanging and stealth to the ability to mask objects in invisibility to the supremely cool ability to duplicate one’s self, the tricks provide options for very cool ideas and strategies. The class also offers useful survivalist abilities that hearken to the ranger like evasion and favored terrain, emphasizing the Henge’s connection to land and kami. The capstone ability, transcendence to shapechanger, though, is a bit bland.

The pdf closes with 10 feats for Hengeyokai that e.g. enable you to talk to all animals, talk in all forms, use the forest as a cover etc. The rather bland two shrine-keeper feats from In the Company of Kappa also make a return, though.

Conclusion:
Editing and formatting are good, but aforementioned glitch in the saving throws is rather unpleasant. Layout adheres to the beautiful, bamboo-lined full-color 2-column Kaidan standard and the artworks, though mostly stock, are very appropriate and serve to underline the overall appeal of the pdf. Mechanics-wise and fluff-wise, we get an excellent offering of the ItC-series, however, In the Company of Henge suffers a bit in comparison to the Tengu-installment – there simply is not such a cool archetype like a special Tengu cavalier herein. That being said, the trickster-shapechangers nevertheless fare quite well and offer a plethora of neat ideas, concise writing and a sufficiently unique-feeling racial paragon-class that captures the spirit of the tricky shapechanger quite well without being op. In the end, due to the rather severe glitch in the table and the fact that I was not utterly blown away, I’ll settle for a final verdict of 4.5 stars, rounded up to 5.