EZG reviews In the Company of Fey

In the Company of Fey 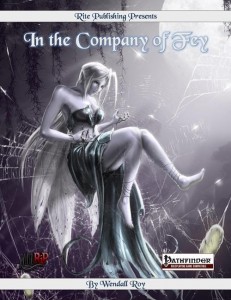 This installment of Rite Publishing’s “In the Company of”-series is 28 pages long, 1 page front cover, 1 page editorial, 1 page SRD and 2 pages of advertisements, leaving us with 23 pages of content, so let’s take a look, shall we?

As has become the tradition of the series, we kick off with an aptly-written frame-narrative, this time even featuring a nice, disturbing poem – from the perspective of Red Shuck, we are introduced to two different origin myths – one brighter, one darker, both including nods to Auberyon, the fabric of dreams and tying superbly in with Rite Publishing’s established canon – disturbing and whimsical, both are well-worth the read. Now physical-description wise, the First Folk have three distinct shapes – their “original shape”, the human/elf-like “seeming” and the at times beautiful, at times disturbing “aspected form”, which most First Folk consider their original form that reflects their nature. Born from the material of dreams, the first folk may create new individuals by giving up a part of their very being. Bonds with other races, their take on alignment and religion and their roles as adventurers and of course, nomenclature are covered as well in this supplement, featuring a selection of nice, flavorful insights into First Folk psychology.

Now crunch-wise, the First Folk gets +2 Dex and Cha, -2 Wis, +2 to saves versus illusions and may automatically disbelieve any illusions within 10 ft., are treated as both fey and humanoids with the shapechanger-subtype, heal +2 points when benefiting from magical healing and twice as many hit points from natural healing, but may not heal naturally damage inflicted by cold iron weapons and may assume the “Seeming” as a polymorph effect, a fixed humanoid form that can’t be changed later. I assume at will, but unfortunately, the ability fails to specify the type of action that changing shapes is. Oh well, at least it does mention the effective spell level. They also get a special sight that works like low-light vision and automatically pierces seemings of other First Folk. The unique lack of aging in the prime material plane is covered thankfully in the age-height and weight-table as well.

Of course, we also get a wide array of alternate racial options: +2 Con and Dex, -2 Int  or +2 Int and Cha, -2 Str would be alternate attribute modifier-sets and a total of 12 other ones await as well: From being better skirmishers, three arrays of minor spell-like abilities usable 1/day, a resistance to negative energy, darkvision and light blindness, improved DCs for curses and hexes, energy resistance 5, bonuses in the shade or fey-like resistances/immunity to sleep. you can also play First Folk that have been exiled or First Folk that may change alignment every level. The latter is particularly cool, though it also opens some questions: Does this alternate racial trait allow a First Folk to e.g. take a level as barbarian and next level, change alignment to lawful and become a monk? I assume that’s not possible as per the text of the respective classes. Still, even if that’s not possible, the trait is roleplaying potential in gallons – Seriously, think about the story-telling potential. This one is VERY fun!

We also get an array of favored class options, covering barbarian, bard, druid, ranger, rogue, sorceror, summoner and witch as well as the 3pp-classes shaman, time thief, taskshaper and luckbringer – all of which are nice and balanced.

Of course, there also are new archetypes for your perusal, first of which would be the Solstice Pariah for the TASKSHAPER! Yes, my favorite shapechanging class gets new fodder! These beings, cursed by Auberyon to become Taskshapers essentially blend the taskshaper and the new racial paragon-class contained herein – interesting archetype!

The Wild Hunter archetype for the witch gets a hound of the hunt as a familiar – complete with unsettling aura and may conjure forth steeds from the hunt and later even hunters in the guise of a wolfish spiritual ally -rather cool high-concept archetype here!

Now I’ve already mentioned the racial paragon class – which has no name beyond “First Folk Paragon” – a bit of a pity there. The class is not available for lawful characters and crunch-wise nets you d6, 6+Int skills per level, proficiency with simple weapons and light armor, 1/2 BAB-progression and good ref- and will-saves. Yes, no spellcasting. But let’s take a look, shall we? At first level, the paragon chooses one particular aspect of the prime material plane – a total of 6 different aspects are there for the choosing. Each aspect comes with two skills that henceforth get an untyped bonus of 1/2 character level, min 1 and the aspect also offers a unique ability: Wild Empathy, Favored Terrain, environmental adaption versus deadly terrain/climates. Alternatively, one aspect allows for a sense motive check to ” learn a creature’s biggest and most immediate fears and concerns. When this ability is successfully used on a shaken, frightened or panicked target, the first folk paragon also learns the target’s surface thoughts” – per se cool, but what do surface thoughts entail? As per detect thoughts? Is this a mind-influencing effect? It ought to be, I guess… Improved saves versus fey are offered by another aspect and a third allows for an emotional surge that nets + 2 to Str and Con, +1 to will-saves and -2 to AC like a barbarian’s rage or alternatively gain +1 to atk, damage and skill-checks and can be maintained as a free action. It can be used 2xlevel+cha-mod rounds per day, but unlike a rage, a surge is a mind-influencing effect that does not impede concentration etc.

First Folk Paragons also get DR scaling up to 5/cold iron and at 2nd level and at every even level after that, the First Fold Paragon learns a fey power. Unless otherwise noted, the fey powers use a DC of 10 +1/2 class level + cha-mod if applicable and some, those marked with an asterisk, can only be used when is aspected form. Aspected Form? Yes, before I cover the Fey Powers in detail, let’s take a look at the aspected form ability gained at first level: Depending on the aspect you’ve chosen, you’ll also get aspected form abilities. Unfortunately, once again the pdf does not clarify which action the changing of forms is, just what level the polymorph effect to change shapes is. Depending n your shape, you get natural weapons (like claws, a bite or even hooves) or may even shape large swaths of terrain, potentially entangling adversaries or grant other creatures luck bonuses or penalties. Also interesting – one aspect form allows them to unleash specific bolts as a standard action that deal 1d6 (+1 1d6 for every two levels) and may deal either fire, cold or electricity damage. or nonlethal damage, which should be a bane to ranged fighters, as it affects the target with severe winds for a round. The effective spell level of this ability scales up to 9th and the damage to 10d6 at 19th level.  I’m not a fan of this ability. Unlimited touch attacks are an unpleasant thing to contend with, even before adding in the elemental flexibility. That being said, the bad BAB and limited range keep me from breaking into one of my OP-rants. Still – a generous limit (like 2xclass level + cha-mod) would see me much more comfortable with this particular aspect form.

But back to the fey powers, shall we? Let’s take a look at the captivating tail power – usable only in aspect form, the tail allows for the fey to fascinate nearby creatures, even so far as to have them follow you – Hameln’s (or Hamelin in the English-speaking world) famous Rat-catcher, anyone? Especially since, much like the legendary flutist, there is no caveat of not following into dangerous areas… Another ability allows First Folk paragons to curse buildings to curse all who spend a prolonged time inside to be hounded by hostile animals -as a supernatural ability, which means no break curse. OUCH. Here would also be a good place to mention fey powers with a certain affinity – a total of 13 of the powers come with an affinity – for all intents and purposes, Paragons with the appropriate aspect for the affinity treat this particular power as if they were two levels higher. Have I mentioned the ability to actually EAT non-instantaneous spells? Enchanting dust (with mania-inducing and AoE-upgrades and even blindness + bleed damage/ undead-sanctums or aging foes as possible effects!), splitting into two (one of which is an illusion, but tangible enough for flanking), taking on the aspect of eldritch plants (6 different effects!), producing a confusion-inducing toxin, growing wings, poaching in the druid and sorceror-spell-lists (or rogue’s sneak attacks or stacking benefits with bardic performances), additional prowess versus undead foes  jumping impossibly high, highjacking curses or exploiting the law of sympathy between creatures (or creatures and objects) – the powers offer a complex and interesting array of options for first folk to pursue.

That’s not all, though – starting at 3rd level and every 3 levels after that, the First Folk Paragon unlocks an ability called aspect endowment – these grant the first folk additional powers usable exclusively when in aspect form.  Especially the environment-aspect endowment, which provides a vast array of different benefits depending on the terrain they find themselves in – neat!

At 7th level and again at 13th and 19th level, the First Folk Paragon also learns a type of spelltrick from either the sorceror or druid-list as spell-like ability. Starting at 9th level, the paragon also learns to create complex illusions (dubbed waking dreams) at will, fitting nicely with the theme of glamers. The capstone essentially allows for a type of immortality – only in the primal world can the character henceforth be permanently slain.

We also get 8 new feats herein – improved disguise via seeming (important in investigation/socially-strong campaigns), making your seeming blend in with the surroundings, making untrained knowledge checks, gaining bonuses versus those affected by polymorph effects (and even suppress them), gaining a sidhe-form or the skill bonuses (but not the other benefits) from a second aspect – all in all, solid feats.

Editing and formatting are very good – apart from one ability being wrongly italicized and very minor glitches, I didn’t notice any issues. Layout adheres to a beautiful two-column full-color standard with borders that reflect a nice old painting of nature. The artwork deserves special mentioning – while fans of Rite Publishing will recognize e.g. the artwork of Auberyon from Coliseum Morpheuon, but most of the artworks I’ve never seen before and they universally are beautiful full-color pieces. Impressive! The pdf is fully bookmarked for your convenience.

Speaking of impressive – author Wendall Roy has created a supplement here that is a joy to read indeed – the race per se is awesome and the racial paragon class complex. Half BAB, no spells, all tricks – can it work? Surprisingly, yes – but it’s a class that REQUIRES careful deliberation: taking e.g. only the natural attacks will make you terribly ineffective. This class is all about smart playing and properly using the abilities, which in another class I’d often consider unbalanced – here, they are the tools that ensure survival. While I’m not sold on the unlimited ranged touch attack, the overall class, when run in my simulations, worked rather fine and offers intriguing roleplaying potential indeed without resorting to tried and true ability-suites. The taskshaper archetype is exceedingly cool to see, as is the glorious writing and in the end, my only gripes are that the alternate forms don’t really do that much to influence crunchy abilities – a tighter synergy would have improved this even further. That, combined with the minor glitches here and there unfortunately keep this pdf from reaching the highest rating echelons: As written, I will settle on 4.5 stars, rounded down to 4 for the purpose of this platform.