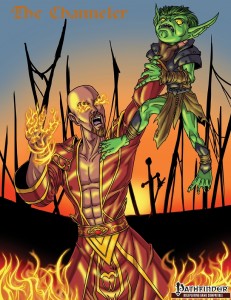 The channeler is an arcane casting class that casts spontaneous via charisma and gets no armor or shield proficiency, but may use simple weapons. Crunch-wise, channelers get 3/4 BAB-progression, full spellcasting (more on that later), good fort and will-saves, 4+Int skills per level and always 8 hp (of the d8) per level – uncommon, but makes sense when taking into account what the channeler essentially is about – casting via life-force.

Whenever a channeler casts a spell, s/he loses spell level x 2 hit points and channelers may additionally overcharge their spells, risking a percentile-based chance to become sickened or stunned. Unlike regular damage, the damage incurred by spellcasting DECREASES not only current hit points, but also the maximum hit points the class has that day – only rest replenishes the maximum hit points (and only rest can cure the aforementioned negative conditions incurred by overcharging)  back to their usual level and no – temporary hp or those netted by con-increases can’t be used, nor can a channeler lower his hp below 0 or kill him/herself via casting.

The channeler gets a fixed number of spells, starting at 2 and getting up to 21 at 20th level. At 3rd level, s/he gets access to 2nd level spells, at 5th level to 3rd level spells, gaining access to higher levels earlier than e.g. the sorceror. The one limiting factor of the channeler’s spellcasting is the amount of hit points s/he has, which means  taking two toughness feats allow the channeler to cast +1 3rd level spell or +3 1st level spells per day before the additional hit points of the feats for HD come into the equation – still, for the investment, a solid power that is not too strong.

Meta-magic can be added by the channeler for free regarding spell-level increase, but doing so deals constitution damage equal to the spell’s level-increase by the metamagic added, capping at 4 spell levels and this damage may, as other damage incurred from spellcasting, only be healed naturally.

The class also gets “Eschew Materials” as a bonus feat (though it features one of several typos, calling it Eskew Materials”) and may learn a favored spell of first level at 7th level, casting said spell 3 times per day sans hp cost and later gaining an additional favored spell of 2nd, 3rd and 4th level respectively. These favored spell uses may  also be substituted for metamagic-powered con-damage on a one-to-one basis.

Similar to a sorceror’s bloodline, the channeler also chooses a source for his/her powers – at first level, each of these sources provide a  unique power and a bonus spell at first level and over the levels bonus spells taken from the list provided for each source. A total of 12 such sources are provided – mostly focused on dichotomous basic concepts – light and darkness, life and death, creation and destruction, the classic four elements as well as chaos and nature – but surprisingly not law. Most of the sources net (with the exception of the elemental sources) the channeler an aura of 600 ft. that can be started as a standard action and maintained as a free action indefinitely, spanning a massive 600 ft. Creation e.g. nets everything within its aura DR 1/- and +1 hardness – affecting not only allies, but also enemies. Destruction auras would conversely add +1 to every damage roll versus creatures (but surprisingly not objects).

Each source also nets channelers an ability at 5th, 9th, 13th and 17th level and the abilities per se are interesting, allowing e.g. for the creation-channeler to spontaneously created animated object servants for a limited amount of rounds per day or net 3+cha-mod times per day, a bonus of +2 to AC against one attack or saving throw, even retroactively, increasing over the levels. Instead of auras, the elemental channelers get to use one of their attribute modifiers when determining the DCs and variables for their spells – which per se is fine – but earth using con feels a bit overpowered for my tastes, as it essentially takes away one of the two attributes the class needs – what was before cha and con is now only con – and that’s NOT a good thing balance-wise. Especially, since at 13th level, con may also be used in place of wis for will-saves. Speaking of things that are problematic – the aura of the light source is BROKEN AS ALL HELL.

It grants every creature in it BLINDSENSE 60FT. AT FIRST LEVEL. 600 ft. radius. Do I even have to tell you why this is broken? Especially with standard stealth-rules, this is bad and while Drop Dead Studios’ “Rogue Glory” can slightly remedy this via the closer and more detailed take, but as a DM, handling blindsense on such a vast scale makes a rather significant array of problems regarding not only modules, but also in-game logic – put one of these guys into your mansion’s vault as security and watch rogues despair.

The pdf also provides advice for using channelers in your game and a short paragraph concerning their roles in the world.

Editing and formatting are not as good as I’ve come to expect from  Drop Dead Studios – I encountered more easily avoidable editing glitches than usual, though they did not impede my ability to understand this class. Layout adheres to a two-column full color standard and the artworks are nice for the low price point. The pdf has no bookmarks, though they would have been useful. It is extensively hyperlinked to d20pfsrd.com, though there are some glitches, with e.g. the word “destruction” being linked to the spell, though it refers to neither the spell, nor an ability – and there are a couple of those in here. The pdf comes in three versions – standard, unhyperlinked and more printer-friendly.

The channeler per se is an interesting take on the full caster, offering not slots, but a number of spells known and thus also quite a bit of flexibility and offering a solution for the concept of life-force-powered casting. I am also quite a big fan of the concept of granting them auras, adding a unique option not tied to spellcasting, which especially at lower levels will give the class something to do besides burning spells. But…really, 600 ft. is a LOT of ground and at lower levels too powerful – a scaling formula that expands the aura over the levels would have worked much better here. I’m also not a fan of the attribute-substitution of the elemental sources, with especially the earth one being too strong, as it takes away all but one attribute’s necessity for the class. Another design decision I’m not a fan of would be the classes 3/4 BAB-progression – nothing is done with it. If the source-abilities required a plethora of touch attacks and the class didn’t get full spellcasting, I wouldn’t complain, but they don’t – and in the end, that means the class is better with touch attacks than wizards and sorcerors while getting the high level spells sooner than sorcerors.

On the downside, the class gets continuously weaker and frailer throughout the day, meaning they can nova hard, but have a hard time for longer adventure days. And that’s one of the classes detriments – it requires a lot of tracking on the side of the player and after a massive battle, the character will become easily killable, whereas before, the class could almost tank – which is interesting combined with its BAB-progression. This is hard to rate for me, but honestly, I can see several problems with some abilities and multiclassing could offer additional ones, especially when combined with HD-intense classes and high con-builds, showing imho that the class somewhat lacks a further limiting factor. Also, I think that a slightly broader spell-selection would have helped the class.

All in all, a solid class with minor issues, though personally, I wouldn’t use it analogue to wizards or sorcerors. For some campaigns, though, this will fit the bill just right. But why don’t I rate this higher? Because spellcasting is a limited resource – and unlike any other class, channelers have various ways of increasing their array of available spells – and more so than e.g. wizards and sorcs via attribute-dependant bonus spells, allowing for more ways of getting magical power. Still not thinking this might be a problem? Take one high con creature with many hp and slap one level channeler on them and compare that to the power-increase the same creature would get from a level of sorceror. Yeah. the result’s not pretty and system-inherent, not truly solvable – but still. The decision to make such a class also means that if such issues are not addressed, the .balance is off.

On the one hand, then, this class works – and does so well with a number of interesting options. Then again, it can imho be broken – more easily so than it should. DMs allowing this class should definitely beware and consider the results. Hence, in spite of me actually liking what the class offers, I have to take this potential for abuse into account and thus, combined with the minor glitches, arrive at a final verdict of 2.5 stars – still rounded up to 3, though, since the class does not deserve being cut down to 2 stars.