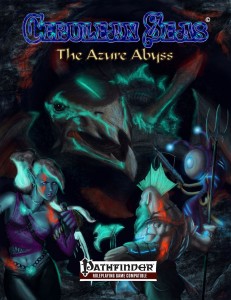 So what is the Azure Abyss? Essentially, it is the aquatic equivalent of the Underdark – the unfathomable depths and after a basic introduction including a glossary we delve into the hostile terrain that is encountered in the very lowest depth of the sea – abyssal depths and hadal depths – 10.000 ft beneath the waves until 20.000 feet for abyssal zones and below that, the hadal zones. Terrain, from trenches to sediment to mini-ecosystems that spring forth from the cadavers of massive beings to finally cold seeps, infectious slimy warts and mussel beds. Hydrothermal vents, acidic zones, megaplumes (essentially aquatic volcanic eruptions) and 6 forms of geologically poisoned areas   as well as pools that act as teleportation gateways further suffuse the depths, making for a crunchy and thoroughly intriguing toolbox to spice up your terrain.

The second chapter details deep sea-races and kicks off with a revisited section on other aquatic races that allows you to create deep sea versions before providing new aquatic races, which of course include buoyancy information and depth tolerances. The first would be the Asterak, who gets +2 to Int and Con,-2 to Str, count as merfolk, get darkvision 60 ft, may 1/day utilize shocking grasp, electricity resistance 5, can control their bioluminescence and are susceptible to low depths. beyond these luminescent creatures, we also get aquatic dwarves – the austorian Dwarves. They get +2 Con and Wis, -2 Cha, pressure and geopoison immunity, slow swim speed, darkvision 120 ft., breathe only water, get +2 to appraise, cold resistance 5, +2 to saves versus poisons, spells and spell-like ability, may move on land at 75% of their speed, stonecunning, +4 to CMD versus bull rush, trip and proficiency with austorian weapons.

And then, we get perhaps one of the insanest, most badass races to ever spawn – if the artwork doesn’t blow you away, I don’t know what will – Echinns are essentially giant humanoid sea urchins – glowing tentacle-like fingers, arachnoid-resembling eyes, bristling spines. O M G. Want. Crunch-wise, they get +2 to Str and Con, -2 to Int and Wis, Pressure and Geopoison immunity, are gilled anthromorphs, get a normal swim speed, low-light vision, can use bioluminescence at will to glow like a torch, get natural AC of +2, cold resistance, +4 to saves versus poisons, echinn weapon familiarity and poisonous spines. Usually I’d complain about the racial attributes gearing them too closely into the melee-roles – but seriously, they simply are TOO COOL.

If you read Alluria’s Remarkable Races Compendium, you’ll enjoy the aquatic take on the Obitu – neither dead, nor undead, these beings get +2 Str, +2 Dex, -2 Cha, darkvision 60 ft., +4 to saves versus disease/poison, improved initiative as a bonus feat at 1st level, +2 to acrobatics, escape artist and sleight of hand, 5+ 1/2 character level negative energy resistance and immunity against sleep. And no, they are not undead – they just look that way and thus you won’t have to deal with all those pesky immunities. Viden Oculi look somewhat like a beholder – with long rubbery tentacles that act as legs and hands and two of them featuring additional eyes – it’s a weird creature to describe and one you’ll have to see to truly get. The Viden get +2 to Dex and Wis, -2 to Str, are small aquatic aberrations, can secrete slightly acidic tears as slime from their eye, get 30 ft. swim speed, all-around vision, can shed bioluminescence as a torch, suffer from light blindness, are pressure sensitive and choose two detect spells of the first level, which then are constantly active for the creature. Unfortunately, at least personally, I consider that ANNOYING AS ALL HELL. I hate the detect spells and having to consider two that are permanently in effect just sucks – sorry. It’s just busy-work for the DM who will have to look at all those pesky auras all the time. Annoying.

The final new race would be the Abyssal Rusalka, a feykith with a lower torso resembling a jellyfish. These embodiments of deadly beauty get +2 to Cha and Dex, -2 Str, count as feykith, can exude luminescent blood that provides concealment 1/hour, may shed bioluminescence as a torch, get +1 to DCs of enchantment-spells they cast and those of cha 15+ may use charm person 1/day – but what’s rather cool is their shirt of tentacles: It AUTOMATICALLY drains 1d4 hp from foes, healing 1 hp to the Rusalka. They may suppress this ability. And I like its idea -though the execution made me cringe…for a second. Creatures have to begin their round in the Ruslka’s square (!!!) – not an adjacent square, but the Rusalka’s. This is enough of a limitation for me – hence: Two thumbs up!

Deep Drow and anthropomorph crossbreeds of Seafolk and Echinn complete this chapter before we  get tables for all the vital age, height and weight/depth tolerance etc.-tables and dive into a discussion of existing classes in a Deep Sea context and get into a new base class, the Angler. Anglers get d8, 6+Int skills per level, 3/4 BAB-progression, good fort-saves and proficiency with light and martial weapon as well as light armor proficiency. And the class is interesting indeed – essentially, its angle (pardon the pun) is battlefield control: They may, via preparation, change 5-foot square upon 5-foot square, into a deadly area – impeding defense, movement, offense – make hindrances only happen to one character etc. – as well as creating traps much like those of the ranger to further pepper the battlefield. Per se a great class, though honestly, I would have loved to see more hindrances/traps, though Drop Dead Studios’ “Vauntguard“-class could easily be scavenged for more traps – at least that’s what I’ll be doing!

We also get 3 10-level PrCs: First would be the Halionaut, who gets d10, 6+Int skills, full BAB, medium fort-saves and essentially are masters of the depth diving, being able to divine how warp pools work, gaining favored terrains both planar and common and terrain mastery for these new terrains, all depending on the chosen terrains. Interesting PrC, though not one that blows me away. Myxinmaves get d6, 4+Int skills per level, 6 levels of spellcasting progression and are all about the hagfish – their slime covering the myxinmave’s body with protective coating. They also get a giant hagfish servant, a bite attack that only works against foes with flesh, immunities to all things putrid and an armor of living hagfish as well as the option to transform partially into the creatures, the option to become flexible as if boneless and a poison before gaining a hivemind as a capstone. Cool PrC with some disturbing imagery… (And yes, we get a full page of rules for creating hiveminds and determining their stats – and eventual spawning spellcasting prowess…)

The final new PrC is the Seductor, who gets d8, 6+Int skills per level, 1/2 BAB-progression, medium will-saves, 5 levels of sneak attack progression and essentially are the secret agents of the depths, combining deadly sneak attack with touches that may charm and paralyze foes. while hiding their alignment. Again, not a bad PrC, but not one that got me overly excited.

After that, we’re introduced to Special materials and weapons of the deep (the latter coming with full color artworks!!!) before getting, of course, more feats – 21 to be precise. I won’t go into details for every one of them, but I will mention the following: Eating special materials to heal yourself, emit a siren song 1/day, dazzle with bioluminescence, expand  poison clouds and Viden may take a whole array of feats to transform their base forms and finally even see slightly into the future. Of course, some new toys for anglers , sharper spines for echinns, etc.. can also be found here – my favorite feat, though, would be the female ceratiodi piscean’s Dual Mind – after having mate graft himself into your side, you may now use your mate’s mind to gain two weapon fighting and ignore dex-requirements for the follow-up feats, get +1 favored class and +4 to saves versus mind-affecting effects. Weird and cool.

Speaking of cool – the 10 new spells are absolutely glorious: Ever wanted to make a foe want to attack him/herself? Or create acidic zones? Yeah. Extinguish pesky bioluminescence? Yep. Or merge part of your body with a greater creature, highjacking its body for your purposes, essentially becoming a parasite? Now THAT hasn’t been done before! After 8 new magical items, we dive into the campaign setting specific part of the book with A LOT of awesome adventuring potential.

The Deep Sea Bestiary deserves special mentioning – Alluria’s monsters usually at least are good, as are their artworks. Seriously, you have to see this book’s bestiary to believe in its existence. We get a minimum of at least one signature ability for each one, but the artworks – OMG. I’ve never seen anything like it. Seriously. Paizo-level and beyond. These artworks can stand their ground, toe-to-toe with the industry-leader and perhaps even surpass them. Yes. That good. This bestiary may be the most beautiful one I’ve EVER SEEN. From the disturbing deep sea dragons to squid imps and the alien grandfather worm, these artworks will BLOW YOUR MIND. And the best thing about them is: Their crunch lives up to these artworks. From the humble to the CR 23 behemoth, these creatures are glorious, ooze iconicity and set the bar higher for ANY monster-book out there. Have I mentioned starfish people that manage to look badass?

We also get a pronunciation guide, a list of deep sea critters by CR (including the Bestiaries and Alluria books!), an index of tables, an art index and 1 page of cardstock minis.

Editing and formatting are top-notch, I didn’t notice any glitches – which is a massive feat at this length. Layout adheres to Alluria Publishing’s drop-dead-gorgeous 2-column standard and the pdf comes fully bookmarked, though sans printer-friendly version. Expect a massive drain on your printer (or get this in full color print). I HAVE to mention the artworks – even by Alluria’s insanely high standards, they are insanely beautiful. They actually are the best-looking artworks I’ve ever seen in any 3pp-book. They surpass many 1st party publisher artworks, whether Paizo or WotC. It boggles the mind, incites imagination. Thoroughly impressive – the artists have been up to their a-game!

At first, I was blown away – the new races actually included two ones I’d want to play and WILL include in my campaigns – something that rarely happens! When the class and PrCs didn’t stand up, at least for me, to the predecessor-pdf’s awesomeness, there’s nothing particularly wrong with them, but still – my enthusiasm was slightly dampened. And then, via feats and spells and items, the book once again managed to build up tense expectation that was released in a blast in the bestiary and campaign setting information. While I first thought this would clock in as 4 stars after reading the class-section, I can wholeheartedly recommend unanimously ALL THE REST of the book – from terrain to fluff, from crunch to creatures, we get a massive array of superior content that provides some of the coolest creatures to have ever featured in a given bestiary – to the point where any verdict not a 5/5 and a seal of approval would be a disservice to this book’s stunningly awesome content – so there you have it. GET THIS! Even if you don’t play beneath the waves – for aberrations and strange cthulhoid creatures, there is so incredibly much to scavenge here that I’ll guarantee you won’t regret getting this, even for usage above the waves.

Don’t let this gem slip through your hands and dive right into its depths here on OBS!