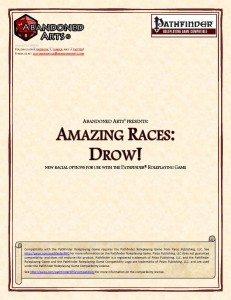 We kick this off with 4 new feats:

-Darklands Elite: A teamwork feat that rewards using aid another to improve atk and AC of allied drow by netting a bonus to atk and damage with AoOs equal to the number of allied drow within your reach. This feat suffers from multiple issues – what classifies “Within your reach”? Within the weapon’s reach? Adjacent? I don’t know. I also am not sold on whether this is appropriate for the back-stabbing, chaotic drow on a fluff-side.

-Demonic Consular: When your quasit communes on your behalf, you get a +2 profane bonus on int-based skill checks and initiative for 1 hour, but after that, you receive a -1 penalty to will-saves for a n hours. I like the fluff, but since it is reliant on a demonic familiar and comes with a drawback, I consider it slightly too weak to properly work in-game.

-Poisonous Spell: Metamagic at +2 levels, include a poison into a spell (that is consumed by casting) that allows for a save to reduce or negate. If the target fails, s/he is afflicted by the poison as well. For each additional target, have the DC of the poison reduced by 1. I don’t think this feat works as intended: Since the saves of the targets are the spells instead of the poisons, save-DCs could actually get higher. Also: It’s weird to me that one and the same poisonous fireball can have varying effects depending on the amount of creatures hit – many kobolds = weaker poison, one giant = stronger poison. Just doesn’t feel right to me. Also: The metamagic feat can be used as a detect spell for invisible targets – don’t know how many invisible foes are hiding over there? AoE-spell and count down the DC. That’s not the good design I’ve come to expect from Abandoned Arts.

-Spider-Speaker: Influence arachnids and arachnid monsters with wild empathy. Again, problematic: Arachnid is NOT a subtype, so do demonic retrievers count? What about scorpions? A concise definition of what constitutes arachnids for the purpose of this feat is in order.

Next up are 4 character traits – one nets + spell level hit points to the conjuration (summoning) called creatures, +2 to checks to make charmed creatures do something they usually wouldn’t do, +1 to atk versus drow and one trait that allows you to make a coup-de-grace that takes one minute to perform, but nest you a +1 to atk versus living creatures for one hour – per se cool, but what if the drow is hit while performing the coup-de-grace? Is it interrupted? Does the target take damage? If yes, how much? Great idea, but falls apart regarding the execution.

We also get 2 new alternate racial traits: Betrayer lets you exchange the spell-like abilities for the Betrayer and Quick Draw-feats, whereas Stealthy replaces faerie fire, dancing lights and keen senses for the Stealthy bonus feat as well as the option to reroll a single stealth-check per day.

The racial archetype this time around is the Malus for the Magus-class, who gets no medium or heavy armor spellcasting prowess, but also gets two exclusive arcanas, one that allows you to deal bleeding wounds that are treated as if the target was spell-resistant for the purpose of healing spells and the second netting you access to antipaladin cruelties, which is rather cool. Better, at higher levels, the malus may gain limited access to hexes and major hexes – overall a VERY cool archetype.

Editing and formatting per se are very good, I didn’t notice any glitches. Layout adheres to Abandoned Art’s 2-column no-frills standard and the pdf has no bookmarks, but needs none at this length.

Oh boy – at first, I was stumped – the feats, imho, are universally BAD and not up to the level of quality I’ve come to expect from Abandoned Arts and even one of the character traits is problematic at best. The racial traits and the archetype, though, save this pdf for me – the feats would make me go 1 star on this, but the glorious archetype and neat alternate racial traits save this pdf from being a train-wreck – brilliant light and darkest shadows mingle, and thus my final verdict will clock in at 2.5 stars, rounded (barely) up to 3, but if you’re not interested in the archetype, I’d suggest steering clear.