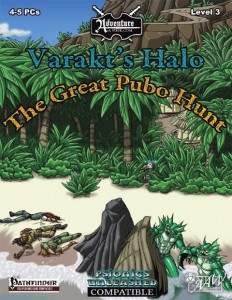 This pdf does sport a psionic psyllabus-page – essentially a handy cheat-sheet that sums up the basic peculiarities of the psionics-system on a handy page – nice for novices to psionics – who also happen to be the target demographic of this module. 11 pregens are provided for the perusal of the players, with all getting their own artworks – while these may not be beautiful, the pregens do sport roughly the same level of optimization, so that’s nice to see.

Why eleven? Well, because there are two new psionic races native to the island of Varakt: The first would be the athmer, who get +2 Dex and Cha, -2 Wis, wild talent as a bonus feat, darkvision 60 ft., Run as a bonus feat and +2 initiative, are amphibious and can 1/day unleash a breath weapon of either cold or electricity damage that deals 1d6 damage of the chosen type in a 50 ft.-line. They also get energy resistance 5 to the breath weapon’s chosen element, are amphibious and can choose +1 power point as an FCO. Personally, I consider this race to be slightly too strong – either eliminating the Run-feat and initiative or the amphibious racial trait. There is a nice tribal distinction between electricity and cold-based athmer and the fluff of the race is nice.

The second race would be the Hrek, who get +2 Str and Wis, -2 Con, are naturally psionic and gain the FCO-option. They also receive darkvision and can reduce the penalty to Stealth while moving by 5 and can use it while running at -20 penalty. 1/day, hrek can cause iron or steel touched to grow into another object – alas, the ability fails to specify what action this takes. the ability also does not specify the effects on magical equipment, whether this can be used offensively in combat, etc. Hrek are treated as +1 level higher when casting spells with the fire descriptor, for the purposes of the fire domain or the fire elemental bloodline, the flame mystery’s revelations and alchemist fire damage-causing bombs. Odd that this does not extend to psionic powers utilizing fire as the chosen energy. Hrek also get a breath weapon and resistances tied to it akin to the Athmer, only theirs is a cone and either fire or acid-based. Very odd here – why can’t one choose acid and related class abilities for +1 CL? And why have psionics not been included in that + 1 level? The two races come with age., height and weight-tables. I’m honestly not a big fan of the Hrek either.

But this is a module and as such, that’s what I’ll talk about next – so, from here on out reign the SPOILERS. Potential players should jump to the conclusion.

Still here? All right! The PCs begin this module stranded on the odd tropical island (fully mapped, btw.) after an assault of goblin pirates wrecked their ship and awake on the lush beach – only to be attacked by sahuagin and promptly, saved by a group of hrek -while pretty friendly, they pantomime to the players the issues and creatures looming beyond the treaded paths. Overcoming the communication obstacle, hampered by the strange crystals on this island, does make for some awesome roleplaying potential that cannot be solved by just one roll of the dice or magic. It should also be noted that awakening to psionic powers also falls into this chapter, which should be interesting for the pregens, whose strange unfamiliarity is explained via this change. Nice way of tying mechanics with the story! Decoding grat, this language, is a task beyond the immediate scope of this module, though nearby pylons and a skeleton of a translator at least help with communication to a point where it becomes kind of functional.

It seems like the annual Suar rains will soon be upon the island – which requires a sacrifice of a so-called pubo – which would be a fatter, dumber and psionically active local variant of the dodo. Alas, beyond this, the issue of the coastal sahuagin complicating hunting remains. Entering the pubo hunting grounds results in hilarious pain – the birds not only have cognitive crystal kidney stones, they also drop explosive excrement. Finding and capturing one of the dumb birds isn’t that hard – but why are there no other predators in the area? Well, once a huge, mutated mamma pubo comes running, the PCs will know why. And yes, this beast is very lethal! Following the trail of the unnatural mutation, the PCs can find some interesting hints that someone is engineering troubles – as a conch-shell resounds and denotes another attack. On the way back, the PCs can test their mettle further in combat with both blue aegis and soulknives.

Upon their return, the PCs are made to understand that they’ll sacrifice the pubo the next day on the volcano – but at night the blue tribe attacks and steals the pubo they brought – in the case of mama pubo, should the PCs have opted for her, leaving a huge trail they can easily follow and making the hrek look rather incompetent. At the blue’s camp, the showdown with the remaining blues constitutes the finale of this module.

As a nice hand-out, sheets for each player-character allow for a nice help regarding pantomime, representing different words they can decode, providing a great, optional way of simulating the communication in grat-pidgin.

Editing and formatting are very good, I noticed no significant glitches. Layout adheres to a beautiful, colorful 2-column full-color standard. Artworks range from the nice cover to thematically-fitting stock-art and the less than gorgeous pregen-artworks. The pdf comes fully bookmarked for your convenience. Cartography ranges from great to okay and provides a total of 3 maps, all with player-friendly iterations.

Mike Myler’s great pubo hunt is something I don’t get to see often – a genuinely funny module. While it may not be apparent when just reading it, actually playing the pantomime/communication-breakdown is just FUN and this is further emphasized by the hilarious pubo-hunting. This is pretty much a very FUN module that can work perfectly when used with kids – it’s not grim or dark or nasty, it’s just FUN and even young audiences can appreciate the tone when handled by a halfway decent GM. The supplemental help also is a nice bonus and as far as the adventure is concerned. The great pubo hunt is a module that is just fun – a change of pace and a solid introduction to psionics, though mama pubo can provide a very challenging opponent. So, all perfect? No. Quite honestly, I wished the hunt itself had more detail and the same holds true for the hrek-settlement and the settling-in-period. This module would definitely have benefited from stretching this component longer and not just boiling it down to a short period of relative inconvenience. The finale could also have used more details, perhaps some more terrain features, traps, a map or something like that – anything to make it slightly more distinct, especially after the cool battle against the deadly mutation…

In short, I found myself often wishing that there were less pregens and more adventure herein, probably also since I’m not a big fan of either new race – they conceptually left me unimpressed.

This divide becomes more apparent when taking the exceedingly cool module that is here into account – the module-part here breathes Mike’s trademark playfulness and imaginative talent. I contemplated quite a while, but ultimately, I’m going to settle on a final verdict of 4 stars. Consider me excited about the sequels!