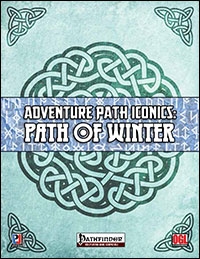 This installment of LPJr Design’s series of pregens for APs is 28 pages long, 1 page front cover, 1 page SRD, leaving 26 pages of content, so let’s take a look, shall we?

The pdf kicks off with an introduction that explains synonymous use of terms (to respect Paizo IP) as well as the basic concept of the line – 8 Pregens, 4 of which are human, whereas 4 belong to the rather uncommon races from LPJr Design’s own NeoExodus campaign setting. These, btw., should you require their details, can by now be found on d20pfsrd.com’s shop. Point-buy-wise, the characters  are 20-point-characters, but each of them offers information on how to scale them up or down to 15 and 25 points respectively.

Now that out of the way, let’s take a look at our first character, the giant-blooded Ulfen Barbarian (Breaker) maiden Asta Krigersdottir – giant-blooded, raised in exile and in an orphanage and finally adopted by a northerner, this woman is a force to fear indeed – and one that features an uncommon entry: Her prefered ranged weapon would be her…heavy mace. Seriously. Thrown anything, baby. As we’ve come to expect from this series, Asta, like all characters herein, comes with advice on further char-progression and roleplaying advice. Neat!

Viniana Aurcroft would be the second human – Taldan rogue (sniper) blessed with heterochromia (which I consider exceedingly hot, but that’s another matter), she came from a moderately blessed family and actually has no tragedy and a rather intact family, looking for fame and her own way – refreshing among all the angsty heroes out there. That being said, her statblock seems to have two glitches – one, her statblock lists an incorrect trait and two, she wields a longsword she has no proficiency in – that should probably be a short sword.

Dron Farwalker, the Kellid ranger (guide) once was saved by either Desna or one of her agents from darkest sorcery hidden in a cairn and thus loyal to her, is a rather well-travelled and surprisingly nice (for a Kellid) man and makes for yet another cool character – though his statblock lacks the list of traits – the results of the traits are provided, though.

Jarani Zidane, the Garundi daredevil bard may seem like an odd duck in the frigid north, but that may actually be the appeal of choosing this particular pregen – a thrill-seeker and fan of the larger-than-life Ulfen champions from the North, he is journeying wild-eyed to the north, all while talking of himself in the third person and trying to charm with his bravardo.

Now the first character from NeoExodus’ exotic races would be Evergreen, a Dalrean (plant-like humanoid) witch (hedge witch) who comes with a weasel familiar as well as one of the signature feats of the race, which allows the dalrean to grow a bud and store a spell in said bud. Appalling bedside manners coupled with a pargamatism make her an uncommon witch to say the least – but honestly, she’s probably the odd choice for players who wish for a challenge – dalrean susceptibility to extreme temperatures and her lack of spells/items to counteract that mean that she will have a tough time – still, a cool character. She lacks the trait-list in the statblock.

The prymidian gunslinger Gryn Kynon is a refugee from another world – and his mugshot enforces that – rather badass, if I may say so, an I’m not particularly fond of the tentacle-using Prymidians! Stranded in the Mana Wastes, he left because he actually hates no languages (unlike his polyglot race) and loves magic – hence making for a cool lone stranger-style character – also due to coming with flare cartridges. He also lacks teh trait-list.

Chalu Adsila would be a cavian cleric – also from another world, a failed apprentice of the winter witches, and thoroughly un-Cavian: Seperated from her racial hive-mind, she actually embraced the antithesis of the deceptionless truthfulness of her kind, obsessing over minor lies and obfuscating things with her harmless, but potentially rather hilarious madness – oh, and she fights with a bladed scarf. Nice, though again, the trait-list is missing

The final new creature would be Maqia, a Cynean Inquisitor (with hunter) – the crystalline being has left her ecclesiastic upbringing to do the work of Iomedae instead of living a life as a living piece of jewelry. Her Cynean race and their particular benefits mean that she is perhaps the most “easy” of the characters herein – at AC 20, with solid melee and range capabilities, she is probably the strongest of the characters herein and could be considered the most optimized. Again, no trait-list in the statblocks.

Editing and formatting are good, though not perfect – I noticed minor stumbles in wording and punctuation here and there. Layout adheres to a drop-dead gorgeous 2-column standard with a blue-tinted background and scroll-like highlight boxes and once again, LPJr Design has to be complemented for oen beautiful pdf. The same can be said about the glorious mug-shots provided for each character – glorious indeed and often enough to make you introduce these characters right away. The pdf comes fully bookmarked for your convenience and in two versions, with the second being more printer-friendly.

Jeff Lee knows how to write compelling characters – that’s a given by now. The pregens herein are compelling, offer cool roleplaying opportunities and have some nice ideas for further advancement. Surprisingly, the stories for the uncommon races are the stars this time around – with cool background stories galore, these could well stand as intriguing NPCs on their own as well. Especially the Cavian and Prymidian deserve special kudos from yours truly – cool characters indeed! Now on the downside, I do consider both Asta and especially Maqia slightly more optimized than the others, but that’s okay, I guess. More annoying are the minor glitches like the absence of trait-lists from no less than more than half of the statblocks herein. Since the sniper has a wrong weapon, getting trait-lists to properly be able to deduce how those builds were made without too much page-flipping – especially if you’re not yet familiar with the NeoExodus-races a clear separation of traits and racial traits would have made modification of these pregens for prospective players easier. Now don’t get me wrong – this is by no means a bad offering – but it is also not realizing its full potential and has some minor issues that weigh heavy on a pregen-collection, which is supposed to be ready from the get-go. Hence, my final verdict will clock in at 3.5 stars, rounded down to 3 for the purpose of this platform.

You can get these pregens for Reign of Winter here on OBS!