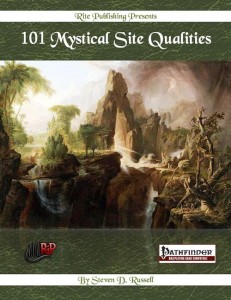 This pdf is 43 pages long, 1 page front cover, 1 page editorial, 1 page SRD, 2 pages advertisement, leaving us with 38 pages of content – quite a massive bunch of content, so let’s take a look!

After a short framing narrative we waste neither time nor space to delve into mystic site qualities. I’d like to go on a tangent here: Iconic battles and modules are not necessarily defined by the adversaries faced or brilliant builds of the foes you pit against your players. As much as these things matter, what makes combats and adventures more exciting even would be often overlooked component – the terrain. Using tables and ravines for tactical advantages makes your world feel more alive and immerses your players more in a cohesive world. Fighting a duelist is cool. Fighting a duelist on a shaking precipice of a grumbling volcano is awesome and so much more memorable. Sneak Attack Press’ Terrain Toolbox did a great job of providing a toolkit for mundane types of terrain to make your campaign’s encounters more memorable.

Rite Publishing’s offering, then, is going one step into the magical world – instead of repeating mundane terrain customization, we get mystical qualities – essentially, these special qualities can be applied to just about any area: From small towers and groves to huge swaths of land, these site qualities modify the basic terrains and can change the way combats play out.

Each of the sites in this product comes with an effect as well as an evocative short example of an application of the respective site that can be considered an adventure-hook in its own right, offering inspiration to use the respective sites. Of course, I can’t go through all of the sites contained in this pdf without bloating this review beyond usefulness, but I’ll try to give you an overview. Now if you’re familiar with Monte Cook’s Arcana Unearthed/Evolved, you’ll, like me, consider the first site a blast from the past: The Akashic Node – a kind of collected storehouse of knowledge into which creatures may tap to increase your knowledge. Nice to see the cool concept disassociated from the Arcana Evolved base-class and transported into PFRPG, readily available for any class.

Arboreal Home is also a VERY interesting quality that e.g. I’d add in a limited manner to the Margreve: Elves, gnomes, fey, native magical beasts, and native animals in an arboreal home gain a climb speed of 1/2 their base land speed. There are more exotic ones included, like the astral chain – when you enter this site, the respective creatures subject to the site’s effects may not leave more than 75 ft. from those linked to them. AWESOME! Of course more common sites are also included – blessed sites, places that induce nightmares, areas that bleed dry those bleeding on the territory, gaining access to spell-like abilities like acid arrows, sneak attack-enhancing sites are part of the deal just like the giant-infested cloudlands known from “Jack and the Bean-stalk”, places to establish covenants with otherworldly powers (crossroads demons, baby!) etc.

Or take a site where a powerful servant of death itself was vanquished, resulting in Finger of Death becoming readily available. OUCH! Ethnicity-specific sites grant benefits to chosen peoples and there are even areas, where water can be treated as air and vice versa, allowing for underwater adventures sans the issues of requiring spells to dive into the depths. Some sites are saturated with magic to the point where subjects may tap into the powerful energies of that spot, gaining massive benefits from the sites or even changes the way DCs for your spells are calculated to include a d20, making magic that much more unpredictable.

If you’re more inclined to include a mythic Hyperborea-style site, you might wish to check out the endless summer mystical quality and for those who enjoy a little humor, there also is fodder in here: While by no means exemplary since most of the qualities are rather serious, “Everybody was Kung-fu fighting!” is interesting: It makes all non-Asian/monk-weapons miss automatically , but grants people at the site access to monkish abilities – something e.g. the casting classes will quite probably enjoy as a nice change of pace. Wonky? Yes, but some slight humor, as long as it does not get overbearing, is welcome in my game.

One of the most interesting sites would be Fate’s Web – it links all members of a group and evenly divides damage between the recipients, necessitating a massive change in tactics. Speaking of tactics – the PCs will need a lot of tactics and survival-knacks when e.g. visiting a site always haunted by massive amounts of violent weather like storms, earthquakes etc. Infinite Spaces are also part of the deal, as are morphic geographies for unstable locales, sites that prohibit healing, sites that allow you to create druidic cocoons, sites to travel the planes – the possibilities are almost endless.

As another concept I really liked, we also have the sites that actually reward the rightful rulers of a respective area, as is the massive d%-table included for wild magic, which should also work well in combination with SGG’s stellar Chaos Magic-supplement. The pdf closes with a sample complex mystical site, including lore-sections and a sample story as well as a new sample curse.

Editing and formatting are top-notch, I didn’t notice any glitches. Layout adheres to RiP’s 2-column full-color standard and the art-selection deserves special mention: While stock, the artworks are mind-bogglingly beautiful and evocative of the high-concept crunch contained herein. The pdf comes bookmarked.

Once in a while, a DM comes across a pdf that enriches massively one’s campaign for ages – there are some pdfs that fall into this category, but honestly, not  that many. This is one of them. Providing an awesome amount of evocative sites, this pdf provides us not only with sites and rules – it inspires. It inspires the DM to mix up the rules. To take these site-qualities and use/combine them to make locales stand out.

Fighting in the accursed tomb of Grythax the Reaper will feel distinctly different than a battle in the primal heart of the Kelissara-jungle now – I took multiple qualities from this pdf, added them to the locales and suddenly, these places got completely different, inspiring, smart – requiring the players to use different tactics, offering new options and adding not only story-telling, but also tactical depth to any location. This pdf is one I absolutely loved reviewing, for it is chock-full of gorgeous and wondrous options that belong into the toolkit of any DM.

Much like the Terrain Toolbox or Raging Swan’s Dressing-line, this pdf is guaranteed to enrich your campaign for years to come. There are not many pdfs out there right now that will provide as much joy for 6 bucks as this one. Whether to add spice to modules lacking the je-ne-sais-quoi or to just make your locations more iconic – this is the universally-recommended  toolbox for me and one of the scarce few files I’d rate 6 stars, if I could. This is an all-but required purchase for any PFRPG-DM looking to spice up their areas and well worth extremely easily-awarded 5 stars + seal of approval.

Be sure to get this superbly useful pdf here!