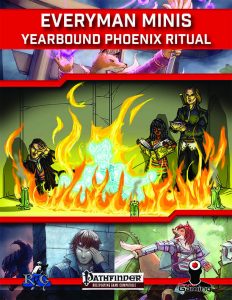 This Everyman mini clocks in at 9 pages, 1 page front cover, 1 page editorial, 1 page advertisement, 4 pages of SRD, leaving us with 2 pages of content, so let’s take a look!

Now, on the introductory page, we get a summary of the effects of age categories as introduced and employed in the impressive Childhood Adventures-tome. This is relevant since the ritual depicted within makes use of them. Still, kudos for including the relevant material here.

Now, this pdf provides the detailed rules for the occult ritual called Flight of the Yearbound Phoenix, which is an 8th level necromantic ritual with the aging tag and a casting time of 8 hours. The components include both an afterbirth and dirt from the graves of people that died from old age, with the focuses requiring an alchemist’s lab, a blanket and a costly darkwood hourglass, with the glass wrought from sands hailing from the Plane of Time. As far as skills are concerned, we need Knowledge (arcana), UMD, Heal and Profession (midwife). The backlash is risky…or a boon. Those slain by the fire damage crumble to ash, to be reincarnated as an infant sans memories of the former life. As the pdf notes, this can have amazing story-telling potential: restoring the original incarnation of a target thus changed eliminates the new incarnation completely…It’s but a sentence, but it immediately made me come up with a complex plot. Love it.

Now, one thing I LOVE about Everyman gaming’s rituals, is that they FEEL like rituals: The effect actually DESCRIBES how the ritual is performed. This adds greatly to the sense of immersion and makes the rituals suitable beyond the gaming system. Now, what does the ritual do? Well, it regresses the target to a newborn infant – both physically and mentally. After one year, the baby rapidly ages to venerable, crumbles to dust, and from the ashes, the target reemerges as a newborn with all the old memories intact, can from now on use greater alter age to change their physical age category at will, and ignores all aging-based bonuses and penalties to ability scores. The ritual also acts as a kind of extra life while in effect. Oh boy, I have literally thought of 10 plotlines using this ritual in one way or another while writing this review!

Editing and formatting are top-notch, I noticed no glitches on a formal or rules-language level. Layout adheres to the art-bordered new two-column full-color standard of the series and the artwork provided is nice. The pdf has no bookmarks, but needs none at this length.

Alexander Augunas just *gets* it. He knows how to craft fantastic rituals that resonate with magic, that inspire, that could carry whole campaigns. This is one amazing, flavorful pdf that left me grinning and excited to use the ritual. 5 stars + seal of approval, given sans “ifs” and “buts”.

You can get this inspired ritual here on OBS!