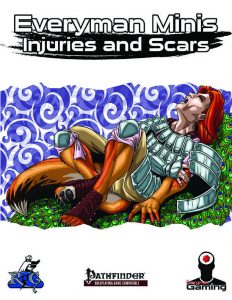 So, one of the components I’m not too fond of in any iteration of D&D or d20-based systems would be that injuries don’t matter much; similarly, curative magic can reduce scars and the like to an aesthetic footnote.

This pdf provides a small toolkit for that: The basic premise for scars is simple: When you take damage equal to ½ maximum hit points or greater, you must succeed a Fort-save equal to 15 + ½ HD. On a success, you get a scar and roll on a table for the location of the scar. Spells of 6th level or lower can’t remove them unless specifically noted, but regenerate can remove one, if 500 gp of material cost in diamond dust is added. Returning from death does not remove scars. Displaying a scar can be beneficial: You get +1 to Cha-based skill checks versus creatures that would be impressed by them , but against some creatures, that may instead translate to a -1 penalty, perhaps even -2 for particularly squeamish individuals.

The pdf then proceeds to provide the Dodging Death section: Whenever a character is reduced to negative hit points equal to Con score or higher, the character can attempt a DC 15 Fort save. ON a success, the character takes an injury and stabilizes at negative hit points equal to Con score -1, instead of dying. This save is not allowed by death effects or when dying from a coup de grace. This should probably also note whether this works for poisons, diseases, Con-damage…

Anyway, you roll a d12 to determine the injury, or have the GM determine the injury. You usually incur a minor injury, unless you roll a 12, in which case you instead take a severe injury. Spells of 6th level or lower can’t remove an injury unless specifically noted, but regenerate can remove one, if 500 gp of material cost in diamond dust is added. Returning from death does not remove injuries incurred. Injuries can injure ears, eyes, locomotive system, arm, groin, spine, neck, head, chest, vitals or heart. Minor injuries, as a whole, cause minor penalties associated with the respective limb/organ damaged.

And that’s pretty much it – the majority of the pdf is devoted to depicting the respective injuries. As a whole, I enjoyed them all.

Editing and formatting are very good, I noticed no serious hiccups. Layout adheres to the two-column printer-friendly standard of the series and the pdf comes without bookmarks, but needs none at this length. The piece of full-color artwork is nice, though I’ve seen it before.

James Ballod’s injuries and scars are per se a nice system. I like the idea, the implementation, and it can add some nice grit to a given game. Particularly in the more down-to-earth campaigns, this should be a neat addition to the game. That being said, I can’t help myself – the topic/subject matter deserved a broader stance. Interaction with weird creatures and anatomies and generally more options would have enriched this supplement in my book. That being said, I’d very much enjoy to see this expanded and may well build on it if my time permits. You could also use these to represent drawbacks, should you choose to. In short: This is worth checking out. My final verdict will be 4.5 stars, though I can’t round up for it – not because I don’t want to or due to a true shortcoming of the pdf, but due to the fact that it can’t develop its concept to be wholly encompassing.