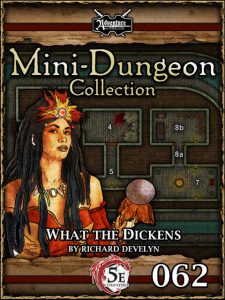 Okay, so in a masterstroke of the old adage of „opportunity creates thieves“, a young pick-pocket named Dodger managed to steal a ring. Problem #1): The target is a rakshasa. Problem #2): The amulet is actually a ring of djinni summoning. The evil outsider is not alone, and, alas, they have failed to reclaim the ring and as such, they have set up a mini thieves’ guild, a coaching service for aspiring criminals of sorts, one that obviously resonates with the Dickensian overtones that you expected from the title. This is, once you think about it, rather hilarious, and indeed, when the pdf notes how one of the rakshasa in disguise looks after his “little wascals”, of the mighty rakshasa, disguised as a bawdy cockney gal, you’ll be hard-pressed to swallow your inevitable chuckle.

This is an utterly delightful, hilarious example of an excellent mini-dungeon; full of literary allusions, as seen through the lens of gaming, this is challenging, hilarious, challenging and utterly amazing, ranking as one of the best mini-dungeons in the whole line. It is baffling how much flavor is crammed into these 2 pages. Oh, and it’s been written by none other than Richard Develyn, you know, the man who writes the 4 Dollar Dungeons; the brilliant author whose modules regularly manage to get the first spot on my Top Ten lists. (Yes, you should absolutely own all of his modules; apart from his first one, they’re all masterpieces in one way or another.) Yeah, once you realize that, you probably won’t be surprised by how good this is. That being said, as much as I like Chris Harris’ conversion here, the PFRPG original is clearly the better book – not due to a bad conversion, mind you, but because the original makes use of PFRPG’s vast creature array in amazing ways – the ring, in PFRPG, is actually a disguised rakshasa subspecies in the shape of an amulet, the rakshasa faced is ophidian and triggers Dodger’s fear of it. It’s small flourishes, but they can’t be translated well. If you have the luxury to choose the version, get the PFRPG-version. That being said, the 5e-version remains absolutely engrossing and cool and deserving of a final verdict of 5 stars.