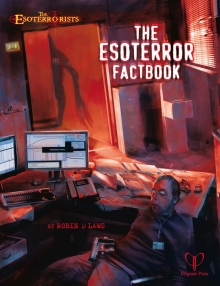 This massive supplement for The Esoterrorists (or any other horror game, really!) clocks in at 150 pages (excluding cover, which is its own pdf), 1 page editorial, 2 pages of ToC,, leaving us with 147 pages of content.

This review is mainly based on the print edition of the book, which was kindly provided by one of my patreons for the purpose of a review at my convenience.

So, what is this massive tome? It represents at the same time a massive dossier that could be considered to be useful as a kind of colossal hand-out, is written as though it was a dossier for agents of the OV: It discusses, on a need-to-know-basis, the realities of the struggle against the forces of the outer dark and the esoterrorists that seek to bring down the membrane, discussing changes in strategy, the psychiatric metrics of the struggle and the, very important, code of ethics that agents should strive to uphold. More than that, it explains the details of extractions, of the conduct in the field, etc. and supplements these pieces of information with flavorful and extremely creepy transcripts.

The methodologies of station duty, establishing deep cover and the like are presented in a concise manner that is a true joy to read – if you’re like me and read a ton of RPG-books (and sometimes read them for reading pleasure/immersion), then rest assured that this book is a phenomenal reading experience – and not only in the guise of a pseudo-secret-agency operations manual. The adversary map as a prop can be seen as a kind of precursor to the organizational structures later refined in the Nights Black Agents game. Speaking of which – the book does cover branches of the agency usually not associated as regular PCs – the SSF, the special suppression forces of the OV, join the ranks of playable options, with more crunchy combat options included for such games herein.

Now this predates Night’s Black Agents and the crunchy combat rules and high-octane gameplay of that system by years, so it is no surprise that they are not as diverse, but for GMs/directors stumped on how to combine the two, these represent a no-work-required variant for more action-oriented gameplay, with evasive maneuvers, martial arts, etc. – so if you’re looking for a change of pace from standard Esoterrorists gaming, this may well still hold up rather well. Still, that would be the one part of the book that has not aged as gracefully as the rest.

Beyond those more crunch-related aspects, however, it should be mentioned that concise rules for dealings with assets and enemies are set down – while these may be modified by the GM, obviously, they represent glorious leitmotifs for whole campaigns. Speaking of which – what I honestly did not expect to like this much, would be the NPC-aspect of this book. You see, the factbook talks, in detail, about various potentially dire, perhaps even world-ending plots that esoterrorists are currently engaged in; it mentions weird occurrences, classifies the antagonists according to their respective psychological profiles…and sports a TON of some of the best NPCs I have seen for modern horror-gaming: From disgusting, sleazy media moguls to cynical cultural scientists, the book offers a diverse and truly creative cast of characters worthy of being primary antagonists for whole campaigns. Sample notes on missions, successful ones and failure, are interspersed throughout the book, further enhancing the reading experience.

From advertising agents to serial killers, the agents of the Outer Dark are presented in a manner that makes them come alive…and it is very evident that the book goes above and beyond, actually managing to get terminologies right and thus making the respective characters feel plausible. Suspected cells and operations are provided in similarly inspiring ways, ranging from gangs to incestuous farmers, international security consulting and high-stakes players on the global scene. The book also lists a wide variety of locations, all of which basically scream to be included in one’s game: Haunted suburban homes, strange logging camps, the road to nowhere and more outré locales render this aspect of the book, once again, a pure joy to read.

While we’re at it: The book not only covers antagonists, but also potential neutral parties – like seemingly benevolent, esoteric cult leaders “doing good” with “magic” – the problematic aspects of these practices and the double-edged nature of involving such beings makes them valid and intriguing wild-cards that further add a significant dimension to the game and the plots you can craft.

Now, the book also contains a sample adventure, one made explicitly for SSF-characters and taking place in Burma – the adventure is per se a well-crafted series of action-sequences, though ultimately, the brief scenario is pretty linear. The ODE introduced here is pretty disturbing and potent, and its weakness/symbolism MAKES SENSE and can be deduced by smart agents, even if they botch parts of the investigation – the module, in short, is solid.

The book closes with a handy appendix explaining the acronyms used and a massive, 3-page index that helps navigating this book.

Editing and formatting are very good, I noticed no undue accumulation of glitches or hiccups. Layout adheres to a nice two-column b/w-standard and the book sports a wide variety of amazing, atmospheric b/w-artworks.. The pdf has no bookmarks – I’d suggest getting the softcover print book instead.

I honestly feel like I failed Robin D. Laws’ book here. Why? Because, frankly, I cannot hope to convey how well this works – this is a glorious reading experience, extremely immersive and inspiring and it gets the horror aspect of Esoterrorists down to perfection. This book, in short, represents a truly inspiring option for horror gaming. All negative things I can say about this book are the result of me being somewhat late to the party – and are thus not the book’s fault. Still, the lack of bookmarks can be annoying and the more combat-intense rules are solid, but pale before the newer GUMSHOE-mods. Even taking that into account, however, I do still consider this to be a must-have offering for anyone even remotely interesting in modern horror or GUMSHOE gaming – the inspiring fluff and glorious prose render this a must-own offering. While this book thus misses my seal of approval by a tiny margin, it should still be considered to be a truly glorious offering, fully deserving of a 5-star-verdict, even in 2017, 8 years after its release. So yeah, get this – it is a true wellspring of inspiration!

You can get this inspired sourcebook here on OBS!