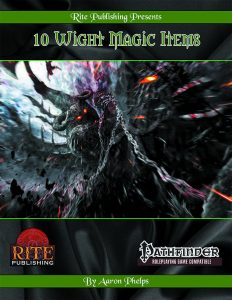 This expansion of magic items for the less than stellar playable wight-race clocks in at 7 pages, 1 page front cover, 1 page editorial, 1 page SRD, 1 page advertisement, leaving us with 3 pages of content, so let’s take a look!

We begin with the bone breaker club, which inflicts +50% damage versus “skeletons and creatures with exoskeletons or brittle construction.” Oh boy. This is not starting off well. So a) 50% of WHAT? Str-mod included? Precision damage? Before or after crits? MESSY. Also: “skeletons” are a specific creature – so not to skeletal champions etc.? What the EFF is a “brittle construction” in rules-terms?? It gets better: 5/day, you can break a bone upon successfully dealing damage. Breaking a bone caused short-term penalties. That don’t even require healing to get better. Oh, and it lacks the information of what type of action is used to activate this ability.

The cowl of compassion nets a +4 bonus to Diplomacy and a 1/day reroll when dealing with living humanoids, but only for undead wearers…at least that’s what I surmised. Boring filler. The crown of the barrow wight king sounds cool, right? +4 to Diplomacy and Intimidate versus undead and 1/day control undead…*facepalms* I don’t have to explain this one, right? Continuing the array of uninspired filler, the slightly modified spell-in-a-can cryptwalker’s boots allow you to teleport back to previously visited locations of death and slaughter like crypts, battlefields, etc. – living creatures thus transported are staggered for an hour on a failed save.

THANKFULLY, the next item is something different: The gray heart contains a reservoir of hit points equal to the wielder’s “charisma score.” That should be capitalized. Upon being reduced to zero hit points, the gray heart’s hit points act as a buffer before death. Also, undead are not “dying” (that being a condition in PFRPG), but are “destroyed”. The hit points in a gray heart can be refilled via draining SPs or spells, healing, etc. – but oddly not via SUs and the like. Installing such a heart causes 15 hit points of damage (OOOHHH!) and renders the character staggered for 24 hours. This item being slot-less. Negative charms absorb up to 30 points of positive energy damage. “The wearer of the charm does not make a Will save for half damage from channeled positive energy.” Okay, but *can* he? You know, successful save = half damage…and it being slotless…does it allow for one character to have more of them??

Packmaster’s hunting cloak is a sucky skill-bonus item that lacks the proper bonus type. Restorative funeral boards allow undead resting on them to regain hit points and ability score damage as though alive and prevents the living from doing so, while also instilling the fatigued condition. Classic item that has serious ramifications of a world’s in-game logic and realities – GMs should carefully consider what this means for the game…

The thrall pendants are keyed to master pendants: The master knows where the thralls are, has an empathic link with the thralls at an enhanced range and the master may designate a creature to gain a boost to Strength and temporary hit points “for up to 2 rounds” at the end of round two, the undead creature “dies from overload.” Oh, dear d12. Undead don’t “die”. The pdf lacks the information on how to designate a “master pendent[sic!]”; it only costs 2K. How does the destruction work? Does it have a cooldown for the two rounds? Can the master designate less time? If an undead has once benefited from it, does the 2-round timer reset? Why is there no save? Put one on a lich, two rounds later, it goes kablooey. WTF.

Vambraces of control tie into the horribly broken frenzy and urge mechanics. There is no legacy item in this pdf.

Editing and formatting are decent on a formal level. On a rules-language level, I am astonished how many issues have crept into these extremely basic items. Layout adheres to a two-column full-color standard and the artwork on the cover is the best thing about this pdf.

I REALLY hoped that Aaron Phelps’ items would fare better than his race. They don’t. These items are extremely basic, sport filler galore (which is *really* bad at this length and not something we usually see in Rite Publishing’s creative item-pdfs!), manage to get rules-terminology wrong in spite of the lack of complexity and universally are lame. The filler items would have been lame back in 2010. 2017, they are inexcusable.

I can try to being relativist here, but the matter of fact remains: There is not a single item herein I’d consider worthwhile. They either are boring, basic, or problematic in some way. The gray heart is halfway decent, but that’s not enough, not by a long shot. Even for the low price point, this is not a worthy addition to Rite Publishing’s canon and I can’t find any way to actually recommend this to anyone. Hence, my final verdict will clock in at 1 star.

You can get these items here on OBS.