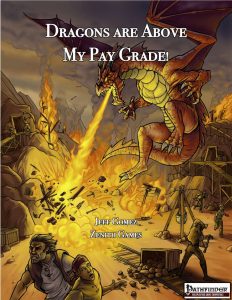 All right, only GMs around? Great! The PCs have been hired by the Grimples Mining Company, who has a lucrative gig going on the Sunstone Island and the adventure begins in the office of Peter Grimples, the amiable half-orc chief of the mining operations…who has just received dire news from one of the local, gold-skinned kobolds: You see, the kobolds had once been enslaved by a dread dragon, who was later slain by a legendary kobold hero, one A’uapa. Now, the kobold priests have actually returned the draconic monstrosity from the dead – and in 9 days, the beast will soar, annihilating the mining company and all workers…after the dragon has receives 1 ton of gold for every century of death, obviously.

Thankfully, not all kobolds consider a renewed servitude to the beast a good choice and thus, the kobold renegade Kekoa shares crucial information with the PCs: There are 4 locales of legend that can help defeat the dragon, all of which can be found on different peninsulas, about 20 miles (or 2 days worth of traveling) from one another…so the bad news would be that the PCs, sans tricks to hasten their journey, will not be capable of visiting them all before the dragon comes to rain death upon everyone.

So, fortunately for the PCs, the ancient kobold hero did leave a legacy of tools the PCs can use against the overwhelming force of the dragon – on the starshaped peninsulas that ring the island are different locations that all contain edges that can help even out the playing field in the incoming draconic götterdämmerung for the miners…there’s just one issue: The peninsulas are about 20 miles from another – in the lush, dense tropical jungle, that amounts to two full days of journey, so unless the PCs have some seriously good ideas, they won’t be capable of tackling all the locales.

Indeed, in the very beginning, the PCs will already have means to influence the final encounter – they can persuade the miners to (badly) shoot hails of arrows against the dragon…and they may find the rather potent mango whiskey, including proper alchemical drug stats – cool! So yes, this is a module where everything matters…but also one which requires some serious wilderness trips.

Which brings me to an interesting component: The information provided for the random encounters is much more detailed than you’d expect from a module of this length: Beyond more encounters to choose from, we receive information on how long the PCs can march in the clime; we get small tables to determine the weather; we even get environmental hazards and features with proper DCs and rules….oh, and charts to determine when a given random encounter happens. This is frankly more detail than what I would have expected and it helps make the transition from area to area feel significant within the context of the module – and this is important, for it is what keeps the respective module from feeling just like a sequence of connected adventure locales.

Now, thanks to the kobold renegade, the PCs will have a general idea of what to expect – so what do the respective secrets of A’uapa? The first location would be the pool of dragon’s bane, which is defended by a fiendish gorilla and a fiendish fish – dipping weaponry in the pool nets a bonus to atk and damage and also provide a poison that can eliminate the dragon’s ability to fly. The second such location would be a fully mapped mini-dungeon, the cave of winds, where basking in the elemental winds, after braving crawlspaces and animated statues, may not only end up with an edge regarding attack and damage bonuses and immunity to frightful presence, but also temporary hit points and immunity to the dragon’s critical hits.

In the third locale, we have the ley line grove, which actually is guarded by some of the local kobolds – but not only them; pixie-like kobolds-sprites also guard this place. In this locale Diplomacy is an option and the boons the PCs can take out of this place pertain better chances of success regarding the magic employed versus the dragon – that and 2 spells that can really wreck the dragon’s defenses – while these affect only dragons, I wouldn’t allow them on a permanent basis in my games, as they do contribute to the trivialization of draconic defenses.

The final place the PCs can visit would be the sulfur temple – another fully-mapped mini-dungeon, though this one does feature quite an array of traps, pockets of gas and bad air. After braving an elemental guardian, the PCs can claim A’uapa’s amulet, which provides a one-time fire resistance 20 to the wearer…as well as increased defenses. The benefits the PCs can accumulate are summed up for the GM’s sake – there are basically two ways of dealing with Varuag, the resurrected wyrm – either fighting him in the mines or defending the mining town. The weakened dragon clocks in at CR 6, just fyi, and is a potent adversary for the PCs…but if they play their cards right, they can actually triumph versus this potent, nasty foe.

Editing and formatting are very good – apart from a few instances, where I noticed missed italicizations and the like, I have nothing serious to complain about. Layout adheres to a printer-friendly 2-column standard and the the pdf is pretty light on the art, but the one piece that’s here is nice and on par with the cover. The pdf I have has no bookmarks, which constitutes a slight comfort detriment. The cartography of both island and small dungeons is well-made and in full-color, but no player-friendly versions are provided, which is a minor bummer.

Jeff Gomez knows what he’s doing. His experience shows. Instead of battling a weak-sauce Medium dragon, we’re t5alking about a HUGE monstrosity here. And the dragon itself is potent. Even after being weakened by the long death, even with all the edges and advantages the PCs can accumulate. So yeah, I’m pretty happy to report that this dragon is a proud member of his race, a worthy foe. With the exception of the poison and spells (which, I feel, dragons would have purged from the face of the earth, had they known about them…I mean…no flight? OUCH!) the PCs also don’t end up with grossly overpowered stuff for their level, which is yet another big plus. Thirdly, but not lastly, I should mention that the poison and spells are significantly less useful when fighting dragons that are not as weakened…so if triumphant PCs develop delusions of grandeur, they’ll be in for a rude awakening sooner rather than later.

That is a big thing for me.

Why? Because I like my dragons as the ultimate apex predator. As the super-smart force of elemental destruction that will annihilate you, unless your plans are flawless and take into account all contingencies. Heck, they still may. I Like my dragons big and nigh unstoppable and whenever I read a low-level “slay the dragon”-module, I feel a bit of bile rising up in my mouth. Before you’re asking – Red Hand of Doom was an apocalyptic high-level experience in my game and I hated the fad when everything had “dragon” added to it back in 3.X. I know, I digress, but it’s important for you to know where I’m coming from with this – for me, as a person, this is not a module I enjoy. In my game, each of the ostensible anti-dragon tools would have been destroyed or rigged to be a horrible death trap by the dragon.

Then again, that is a personal preference and I am very much cognizant of this fact. Which leaves me but one serious logic bug in the background-story of the module as a serious complaint. You probably won’t mind, but I am pretty big regarding stuff like that, so there you go: So, the kobolds have priests that are powerful enough to return a dragon from the dead after centuries. Why don’t these priests simply use their titanic might to squash the mining camp? That’s at least 5th level spellcasting. If the PCs are the best the miners have regarding defense…then a single caster of this potency can annihilate the camp. The kobolds don’t need the dragon. Yes, the priests ostensibly captured the dragon’s soul…but if they’re so keen on the return of their deity, if that did not require the high-level spell…then why not simply do it? Why did no one capture the soul of the dragon-slaying hero as a failsafe or a better leader? Yeah, I get the fear dragons instill etc. pp. – I understand the rationale. But once I got to think more about the premise, it stopped making sense to me.

But I am weird in that way and the chances are pretty good that the like will not come up in your game; my players would utterly balk at the justifications, though, and I know that some folks out there think in a similar manner…so yeah, as far as I’m concerned, the set-up could be better.

At the same time, this should not be taken to mean that this is a bad module; quite the contrary: What we have here is a fun, inexpensive and well-crafted module. In spite of the minor flaws, this is entertaining and bombastic in the right ways. While it misses the mark for excellence by a slight margin, I feel justified in rating this 4.5 stars, rounded down for the purpose of this platform. As far as low-level dragon-slaying modules are concerned, this one gets it done in a surprisingly well-crafted manner.