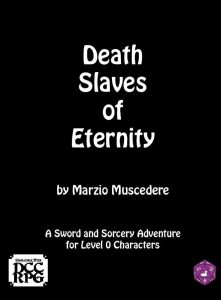 This massive adventure clocks in at 80 pages, 1 page front cover, 1 page editorial, 1 page SRD, 1 page back cover, leaving us with a MASSIVE 76 pages of content, so let’s take a look!

Well, first of all, this is a funnel (0 level adventure) and as such, the review will contain SPOILERS later…but it also is a bit more than that: The adventure actually has quite a bit of interesting supplemental material, so let’s start by discussing that: One of the appendices contains various curses for plundering the dead; there is a nice 100-entry-strong loot-table for judges and we can find a d30-table of magic items, which include enchanted gladiatorial paint, magic veils, vine made from golden pomegranates, the iconic hand of glory, the horror in clay that can be sent after foes, starsteel items and purple lotus dust. I encountered no issues in this section – the items are evocative and cool.

The pdf also contains the ancient god-king Mog’malu as a new patron, complete with 3 new spells, spellburn table, etc. – and yep, they are well-crafted. Similarly, clerics of the patron can be found, with unique sacred mysteries, titles by level and disapproval-table. The pdf also features something fans of Sword & Sorcery will appreciate: Reskins of halflings, elves and dwarves, who become pirates, cultists and soldiers, respectively. So yes, this is a surprisingly crunchy offering for a module…

…but you want to know about the module, right? Okay, so let’s start with the SPOILERS! Potential players should jump ahead to the conclusion!

So, this module is made for 12 to 16 player characters – true to the concept of the funnel, not all will survive this: The module is challenging, so pack your spare character. ;P

The Mad-Sultan fancies himself the heir of the god-king Xothula, deeming his right to rule divine; as such, this decadent tyrant has reinstated the practice of Servus Mortem . the use of the eponymous death slaves, destined to accompany beings of high standing to the afterlife. The sultan drugged his wife with the help of his physician, entombing her “dead”, but really just sleeping body and her children in the sacred crypts of eternity…and you don’t become tyrant while leaving loose ends…and so the physician joined, much to his horror, the ranks of the death slaves.

Meanwhile, the queen on her funeral bier, with only the wailing of her children to break the silence of the tomb, attracted the attention of a thing from the Outer Dark – and thus, arise she did, awash in cosmic filth, reborn as the Crypt Mother, kept in the equilibrium between devil and mortal, life and death. It has been decades since and the Mad-Sultan is growing old – his son, blood prince Sabal-Ya, visited the PC’s humble abode…but the prince was slain and the investigator, the Holy Vizier, declared that all must suffer for the prince’s death – and as such, the PCs are condemned as Servus Mortem to the crypts as death slaves…but unbeknown to the PCs, the blood prince has faked his death in a mad gambit: Convinced that he was bound for an eternity of torment, he is obsessed with reaching the gates of paradise contained in the crypts – it is the prince’s gambit that flooding the dungeon with death-slaves will allow him to reach his goal.

The PCs get their starting occupations, circumstances of their arrest and starting luck influences the additional information they may have. The starting occupation, btw. is represented by a massive table that also determines the equipment the poor death-slaves will bring along, 12 rumors and superstitions and a massive 1-page read-aloud text help setting the scene.

Within the crypts awaits btw. Mog’mula -ram-headed giant and true godking, to whom Xothula was bad an ill-fated apprentice, who nonetheless managed to seal the giant. The dungeon complex features lavishly-detailed and well-crafted read-aloud text galore, and the clues the PCs can find offer degrees of success, allowing for fine differentiation. Similarly worthwhile mentioning would be the fact that sidebars help the judge to depict the respective NPCs properly. It should also be noted that “floating” encounters not tied to a specific locale come with the same, lavish attention to detail that is afforded to the exploration of the complex itself. Lightning is generated by strange witch-light that gleam in unholy, green radiance…and rumor tables among the servus mortem and advice on replacing PCs that have fallen to the complex.

The crypt of the faithful comes with a handy table if the PCs get lost (and don’t want to try to find their way…) and truly, within these halls challenges galore can be found mind maggot prowlers, undead, cackling fools with their infected blood…have I noted the crypts of the mother and the maddening visions? The glorious direct and indirect storytelling? The fact that this module combines the best traits of a dungeon-exploration and investigation?

The module is also studded with copious pieces of full-page full-color artworks, many of which depict the iconic creatures and strange rooms the PCs can – like the chamber of gleaming, black stone, the walls arranged as though they were stars of a mad geometry, with a black block in the middle, from which a rune-carved, gigantic tusk rises. Oh yes, this dungeon is EVOCATIVE. Unique. It is wondrous…and even regular rooms often feature prose that is as captivating as the sword & sorcery greats that have inspired this module – when dead kings, forever crowned in sorrow, corrupted concubines and the wings torn from an erstwhile god await…then you’re not just playing an amazing dungeon that epitomizes the aesthetics that set DCC apart – then you’re playing a module that is amazing, regardless of the system you’re using. (Though, seriously – play it in DCC!) Oh, and yes, there obviously is a guardian down here, a cosmic horror, whose artwork is fantastic in its weirdness…and the conclusion is perhaps the most furious becoming an adventurer-narrative I have read in ages….and no, I am not going to SPOIL the finale…I want you to get this.

The handy appendices keep monsters, NPCs, etc. all in line.

Editing and formatting are top-notch, I noticed no serious accumulation of glitches. Layout adheres to a nice 2-column b/w-standard and is pretty printer-friendly. The pdf comes with A LOT of original full-color artworks that help render this an aesthetically-pleasing experience. The pdf comes fully bookmarked with nested bookmarks. The cartography is in full-color and really nice – my only complaint here remaining that there is no key-less, player-friendly version.

Marzio Muscedere’s Death-Slaves of Eternity is a massive…ah, eff it, I can’t do that neutral shtick here: THIS IS AWESOME. Seriously, this funnel OOZES amazing Sword & Sorcery flair, pure weirdness, is creative, has precise crunch, copious amounts of well-written prose and oozes style, flair and panache galore. This is one downright glorious, massive module – and if you even remotely like the subject matter, you should definitely get this. I mean it. Even if you don’t play DCC, this module is frankly a glorious, rewarding and creative funnel that leaves nothing to be desired and may be worth converting, even if you do not play DCC (but then again…why? DCC is a damn fine system…).

Anyways, this module has a TON of material, great prose, cool critters that actually have a reason to be there and make sense – in short, it has it all. 5 stars + seal of approval. Given without hesitation!! Get this gem!!