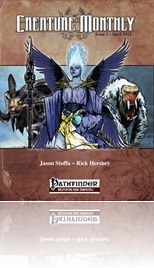 This collection of monster from Fat Goblin Gamesis 49 pages long, 1 page front cover, 1 page editorial, 1 page ToC, 1 page FAQ on creaturedaily,3 pages of advertisement and 1 page back cover, leaving us with 41 pages of content for the new monsters, so what exactly do we get?

The creatures herein follow a two-page standard – one page artwork/statblocks and then additional information about tactics/strategy etc.

The first creature, the Blood Shadow, already provides for quite an interesting read. It’s a creature of the “mode”-type, as I’ve dubbed them in my homebrew – essentially, it has two different versions: One is its incorporeal version that is quite alike a powerful shadow. However, as soon as it deals its con-damage to its foes, it becomes corporeal, gains access to the ability to spray damage-dealing blood and vulnerabilities. I do like this one, however, it suffers from editing that is below sub-par (including more than 3 editing glitches in its entry) and the blood spray signature ability does not specify which kind of damage its blood spray deals. Acid? Cold? Piercing/slashing? We don’t know.

The second creature herein is the Boglin – a subtype of goblin that can squeeze its body through tight spaces and eat just about everything. Unfortunately, the amount of editing glitches remains in that one and while no abilities suffer from that, it rips you from the entry.

The Frost Hag is dependent on her winter stone for power (a nice weakness to exploit) and add the [cold]-descriptor to any of her spells. The hag can also stun foes with her glare. Her statblock doesn’t put the spells she knows into italics, violating the formatting standard.

The Glacial Gaunt (with a very disturbing artwork) can chill the blood of mortals via their bites and also come with a neat aura. Unfortunately, this critter also suffers from the prevalent editing problems.

The Goblin Naga is a spined serpent with poison and an oversized maw – a great creature per se, but again, editing and the lack of italicized spells detract from the quality of the critter.

The Great Yeti seems to have been made for people like me, who’d rather use the Yeti as the mythical force of nature than as a kind of humanoid – it clocks in at CR 16, can call avalanches and will tear foes that meet it in melee to shreds. Unfortunately, the avalanche call does not specify, which kind of earthquake-effect it duplicates – just that the avalanche works like the spell. Unfortunately, the spell works differently for different terrains. It should be noted that SGG’s Avalanche spell is much better suited to be used.

The malignly intelligent Hoarfrost Hound can lure foes into its clutches and comes with a breath weapon – I do like this critter, as I do the Hoarfrost Rams, a neat new, potentially deadly animal with again, an awesome artwork. Speaking of cool, deadly animals, the Horned Bear is another winner. I’m going to stop commenting on the editing glitches.

The Icewisp is a neat lower level, ice-themed wisp – once again, nice! The Ighalan is a disturbing kind of savage degenerated humanoid. What’s truly awesome, though, is the Iron Swamr Golem, which can change from swarm to golem-form and back.

Evil, lightning-imbued treants seek to pulverize foes via electricity, while Nysrogha demons (subtype demon, should be under “d” in the alphabetical order) has the option to frighten foes and gain combat bonuses via its tumorous growths. While the latter ability is cool, I think it could have been easily expanded to make this one even more awesome.

The Flea-covered Rat Ogre may already be known to those owning the Ecology of the Ratfolk, but its revised edition in this book is better – it now has a cool signature ability and feels better rounded and unique – nice!

The Storm Phoenix, Storm Wraith and Storm Angel provide 3 cool creatures, all with their very own signature abilities and awesome artworks as well – nice, especially due to the iconicity of storm-riding magical birds and its potential usefulness in Skull and Shackles.

The final creature is the winter wight, an undead that causes hypothermia – and treats it as a poison. That’s not how hypothermia works in PFRPG.

“Creatures that suffer nonlethal damage from the cold climate become frostbitten or hypothermic, and are fatigued until the nonlethal damage is removed. It is possible for a character to undergo both frostbite and hypothermia simultaneously by failing two or more saves against cold or exposure, at which point she is treated as though suffering multiple fatigue effects, becoming exhausted.”

Why not make its attacks grant a fort-save, on a failure the target suffers from hypothermia until all damage inflicted by the wight is healed. On a second hit and failed save exhausted etc. If you would have wanted to make them deadly and frightening, the third hit would bring unconsciousness. Why shoehorn hypothermia into a lame, easily curable, temporary fatigue-like poison? Also, the DC is miscalculated, I think. Undead use Cha instead of Con for the calculation of such abilities and the wight has a Cha of 17, but the ability has a DC of 14 to resist. It does have the ability focus-feat, though, so we’d actually arrive at a DC of 15, at least if the hypothermia is supposed to be an extension of the touch attack. However, said touch has a DC of 16 to resist and I don’t get how that’s correct.

Layout adheres to a beautiful 2-column full color standard and the artworks by Rick Hershey are stellar and a joy to behold – e.g. the Iron Golem Swarm is AWESOME. Editing and formatting. Oh, editing and formatting. This pdf does not need another pass, it needs a couple of them. Each entry has one or more glitches. Spells are not italicized. Sometimes damage-type is not specified. The version of the pdf that works with my version of adobe (the second still having problems with the artworks) has no bookmarks, which is a pity. This pdf is one of those that hurt me – the artworks are stellar. The creatures are mostly awesome in concept and their ideas rock. Their artworks also underline the awesomeness that most of these creatures are, or rather could have been. Welcome to the subjunctive, everything could be so awesome here.

In fact, were this an ideal world, I’d give this the full 5 stars for the creatures – nice signature abilities, cool concepts etc. Unfortunately, the at best sloppy editing all but ruins this pdf, at least for me. I did not make all the calculations because I frankly don’t have the time to, but the wonky DCs of the Winter Wight make me fear that the glitches extend to the other creatures as well. It’s really sad, actually – the ideas are great, the signature abilities sometimes even inspired, but the editing and formatting glitches all but ruin this pdf for me. Generally, this pdf unfortunately has so many flaws, from one version that doesn’t work to statblock errors and wonky mechanics, that all greatness of the ideas, at least for me utterly evaporates. If I want hand-waved monsters, I can build them myself – I want solid statblocks and this pdf just does not deliver and breaks conventions a couple of times – a subtype that does not exist, a CN angel – the list goes on.

And those are the ones that IMMEDIATELY came to my intentions – sorting through this with a fine-tooth comb would probably result in many, many more glitches. I’m not picky when it comes to statblocks, but the errors herein are significant and impede the usability of these critters. Add the price and not even the good concepts and great artworks can save this. I’ll settle for a final verdict of 1.5 stars, as it fails VERY hard at editing and displays a lack of sureness regarding the rules – I’ll have to round down on this one for now. Let’s hope this gets a revision to make the creatures shine as they deserve to.

Creature Monthly is available from: