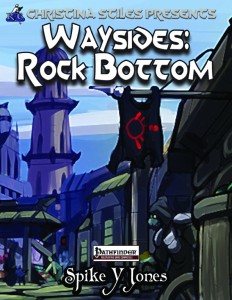 …or rather, let me go on a slight tangent: We all know the place, or at least, anyone who has lived in a town of a certain size does: There always is this one bar that, by any rights, should no longer exist. You always see the same failed existences shamble in and out of it and it exudes a palpable aura of desperation, sadness and tears. And if you’re like me, sooner or later when all other bars are closed, you find yourself stumbling into the place, only to regret it almost immediately.

That is, unsurprisingly, the type of place Rock bottom is – a tavern where those down on their luck, the lost souls, meet. This notion of decrepitude is further enhanced by several factors – the read-aloud text and details enhance just this type of atmosphere; the barkeep – a war-veteran turned beggar walled off two alley-entries and thus, Rock Bottom was born. While since its inception, the roof has been added and slightly improved, Rock Bottom is still a place where the lowest of the low meet and the prices for the watered beer and soup/stew with tainted meat reflect that, never reaching farther than 6 cp. The war-veteran barkeep and his mentally-challenged half-elven employee are full statted, as is a typical patron.

Beyond the less than scrupulous lowlife and small-time criminals, some of which are statted, some patrons actually are agents in disguise, keeping a track on the desperate and destitute and if the set-up does not immediately make you come up with some ideas, you’ll be happy to know that quite a few adventure hooks are provided.

The establishment does come with a solid, functional map in color, though I wished we got a player-friendly version sans secret door showing on the map.

Editing and formatting are top-notch, I didn’t notice any glitches. Layout adheres to RGG’s printer-friendly two-column full color standard. The pdf has no artwork, but needs none and the pdf comes fully bookmarked for your convenience. The cartography, as mentioned, is okay for the low price.

Spike Y Jones is not only a capable editor, this pdf also shows once again his prowess as an author – Rock Bottom is the incarnation of a classic trope and develops it to its logical extreme – if you’re playing a rags to riches story, this is where to begin. If the PCs are victims of a systematic campaign of slandering and deconstruction, this is the low point. Rock bottom is a window into what it means to be truly poor in a world where the average PC walks around with magic items of the worth of a whole life’s worth of work for a farmer or lowly worker, a look at a facet of fantasy that is not often explored. The wayside reads as a compelling supplement and were it not for the lack of a player-friendly map, it would be truly stellar. As provided, it remains a very good supplement and receives 5 stars, though I omit my seal of approval.

You can get this inexpensive tavern here on OBS and here on d20pfsrd.com’s shop!
Endzeitgeist out.