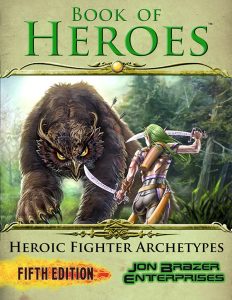 This installment of the Book of Heroes-series clocks in at 16 pages, 1 page front cover, 1 page editorial, 1 page advertisement, 1 page SRD, 1 page back cover, leaving us with 11 pages of content, so let’s take a look!

As you could deduce from the cover, this book contains a new slew of martial archetypes for the fighter, so what do we get? Well, the first would be the knowledge guardian, who gets to choose two skills chosen from Arcana, History, Investigation, Nature and Religion, gaining proficiency in both. Additionally, you may use Intelligence instead of Dexterity to determine initiative, and a similar substitution is possible for when you’d usually add Strength or Dexterity to damage rolls.  At 7th level, you can use a bonus action to make a Charisma (Deception) check contested by a creature’s Wisdom (Insight) – on a success, you get advantage on your next attack against it; oh, and the creature needs to be within 5 ft., so no using this with weapons that have reach. At 7th level, you may also substitute Intelligence for Charisma in a skill check, but may only do so once until you require a short or long rest to do so again; you get an additional use per rest interval at 15th level. 10th level lets you spend 10 minutes in an area to know the location of traps in a 30-foot radius. One use, then requires  along rest to recharge. 15th level nets proficiency in Intelligence saving throws, 18th level lets you ignore class, alignment, race and level restrictions of magic items.

The pact-bound blade requires taking an otherworldly patron and treats any weapon wielded for at least an hour as magical and adds 1d6 force damage to its damage. This improves to 2d6 at 10th level. The archetype also gets Charisma-based spellcasting, starting off with 1 spell slot of 1st spell level, and improving that to 3 spell slots and maximum spell level 4th; you probably have realized by now that this is essentially a warlock-style archetype; The 2nd level spell is gained at 8th, the 3rd at 13th, and the 4th at 18th level. 7th level nets an eldritch invocation, with warlock level equal to ½ fighter levels regarding prerequisites. 15th level nets an otherworldly patron feature of 10th level or lower.

The shadowed blade starts with an feature to increase your melee reach by 5 ft. twice before requiring a short or long rest, with 8th level adding a use, and 15th level increasing that to 10 ft. 7th level allows you to teleport 15 feet while in dim light or darkness, 30 ft. at 13th level. One use before you need a long rest to use it again. 7th level also nets darkvision 30 ft. 10th level nets AC +1, 15th the feature to use your reaction to teleport up to 30 feet away – this might seem a violation of how reactions are usually phrased in 5e, but actually isn’t, as there are two distinct instances that are covered regarding incoming attacks and this feature, namely before and after damage is rolled. Personally, I think that more uses, but before/after attack roll results are made known would have made more sense, but that are just my 2 cents. 18th level makes you invisible when in dim light or darkness, even against opponents usually able to see in them. Somewhat surprising that the archetype got no Stealth proficiency.

The shieldbearer extends you shield’s AC bonus to allies within 5 ft. of you; allies wearing a shield do not get this bonus. 7th level lets you sacrifice your shield, making it broken, to negate a single weapon attack that targets you. This is btw. surprisingly not codified as a reaction, which I assume to be intentional, since the 10th level feature allows you to intercept attacks on nearby allies by throwing your shield in the way, imposing disadvantage on the incoming attack. This *is* a reaction, and has an interesting caveat: It can only be used again once you’ve obtained a shield. Decoupling this one from the rest mechanic is a good call. 15th level allows you to add your shield bonus to saving throws versus area of effect attacks, and if you’re standing between the source and allies, they also get that bonus. This is the iconic scene of the knight guarding his friends – love this one. The 18th level lets you use your reaction to make a melee attack against enemies trying to move, knocking them prone on a successful hit.

The tainted soul is immune to the frightened condition (they know the abyss or hell awaits them, and try to redeem themselves…) and other conditions caused by fear; you also increase your speed by 10 feet when taking the Dash action, provided you move towards an enemy. When you do, you can make a melee attack as a bonus action, at the cost of losing 2 AC until the start of your next turn. 7th level lets you interpose yourself between an attack and an ally within 5 ft. as a reaction; this hits you automatically, but doesn’t bypass resistances or immunities. Starting at 10th level, you only need to sleep once per week; you can still take long rests, etc. 15th level increases all of your weapon attacks’ damage by an additional 1d6 necrotic damage. 18th level makes any creature you attack suffer from disadvantage on attacks against you.

Tacticians can use their bonus action to grant allies your Charisma modifier either as a bonus to attack rolls or damage rolls against a creature for 1 minute, with 8th and 14th level providing another use before needing a short or long rest to recharge. Odd: The feature has no range, and does not specify that the allies must be able to hear/understand you – pretty sure that’s an oversight, comparing the phrasing with e.g. bardic inspiration. 7th level is neat, as it lets you use your bonus action to suppress a couple of negative conditions. At 10th level, you may Help an ally attack a creature within 5 feet of you, granting all of the allies’ attacks advantage. At 15th level, you can grant allies temporary hit points via a 1-minute pep-talk. 8th level nets a 30-ft. battle cry that renders enemies reliably frightened, with success reducing the duration to only the start of your next turn.

The thrown weapons master gets 3 throwing tricks at 3rd level, and 2 additional ones at 7th, 10th and 15th level. You have 4 uses of them, and at 7th and 15th level, you gain an additional use. There are 13 throwing tricks provided, which include critical hit on 19 and 20 (risky, since tricks have limited uses, in contrast to e.g. the champion’s Improved Critical feature. There’s also one for ignoring half or three-quarters cover via banked shots, double throws, choosing physical damage type freely, etc. Weird: Flesh Wound makes your thrown weapon deal half damage. Why would you ever do that in 5e, where you literally get to choose if an enemy lives or dies? Unfortunate name: “Foot Attack”, since RAW, it should also work on things sans feet. I was also puzzled why we didn’t get more tricks – there aren’t that many, considering that the archetype will get the majority of them (9 of 13) during its progression.

Also at third level, we have the feature to throw weapons sans disadvantage while in melee. 7th level nets proficiency in Acrobatics, Insight and Perception; if you already are in one, you double proficiency bonus for that skill. 10th level makes your aim as a bonus action versus targets within the normal range (consistently called “shorter range” here) for a doubled proficiency bonus on a single thrown weapon attack. 15th level lets you use your reaction to hit missiles passing within 10 ft. of you out of the air, and at 18th level, you notice invisible or hidden creatures within 10 ft. The former imho should get a contested check, but since it’s the 18th level feature, I get why there’s none here.

The unbroken hero can use their reaction to make an attack targeting an ally within 5 feet hit them instead; oddly, this is missing the caveat that you must be able to see the attack, which another feature in this very pdf did have; it obviously doesn’t work with AoE attacks or spells, as explicitly stated here. At 7th level, we have proficiency with Intimidation and Persuasion, doubled proficiency bonus if you already are. At 10th level, you get +1 use of Second Wind before requiring a rest; 15th level provides immunity to the frightened condition, as well as the option to remove it from an ally within 10 feet as a bonus action. The 18th level feature is better than that of the tactician – it’s also a Charisma-based scream, but it’s one that paralyzes for a minute, or renders frightened on a successful save until the start of your next turn.

Editing and formatting are okay on a formal and rules-language level; while the syntax of abilities sometimes deviates slightly from 5e’s conventions, that doesn’t hamper rules integrity here. Apart from very minor snafus, such as one instance of proficiency “modifier” instead of bonus, I have nothing relevant to complain about. On a formatting side of things, some features list average damage values, which is not the standard for class features, but doesn’t hurt either. The pdf comes with a two-column full-color layout, as well as full-color artworks, with 3 one-page pieces and a half-page version of the cover-image. The pdf comes fully bookmarked for your convenience.

Dale C. McCoy Jr.’s martial archetypes for fighter cover some roles that are bound to see some demand out there; that being said, I also couldn’t help but finding myself wishing that there had been a few more bold designs here; the Tactician’s coordinated strike, for example, is rather potent, but only starts off with one use. Having it more limited, but more uses, would have made it more versatile and less of a feature you leave for the boss encounter. I was also somewhat surprised by the thematic overlap between a few of them: We have two capstone battle cries, for example. There’s more thematic overlaps here than I expected from a pdf of this size. The designs here aren’t bad in any way, but I wished the pdf was a bit bolder with its concepts. That being said, if you do enjoy the less complex martial archetypes and similar class options, you’ll find some compelling material here. As a whole, I consider this to be somewhat of a mixed bag, which is why my final verdict will clock in at 3 stars.