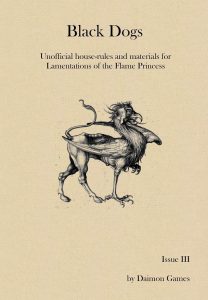 We begin this installment of the Black Dogs-‘zine with a brief call for submissions and editors – considering how installment #2’s rules-language fared, I really hope someone will volunteer/that the author improves in that regard. We also learn about future plans for the ‘zine.

In this installment, the focus lies on adventure locale creation, and thus, we begin with a summary of the very basics of adventure locale creation; for most referees, this will not be particularly useful, but we do get a table that provides general locations. And I mean “GENERAL” – entries include: “Traditional farming”, “Ancient druidic traditions” and the like – while not bad per se, the table is simply super-generic and would have made more sense as split up and more detailed tables. One for general themes, one for distinguishing features, etc. – in short: Don’t expect Raging Swan Press excellence regarding dressing here. Much more useful and nice would be the second table, wherein you can determine population and troubles – this one is still a general table, but it is more precise and focused on its subject matter. The sample monster table that’s next notes “A wyvern gone berserker” which made me smile. Picture it: A wyvern in furs, gnawing on its shield. (That should be “berserk” – and I figured that the presence of a wyvern alone would be bad news…) The monsters noted are classics – trolls, gryphon, etc. – solid, but unremarkable and more in line with traditional fantasy than I frankly expected. Something weirder or less vanilla fantasy would have been more in line with the tone established by previous installments of Black Dogs.

Then, we get something actually helpful, a d20 table of possible connections which can quickly tie things together: “Bent on hopeless revenge”, drugs, etc. – these and the alternative entries are helpful for quick scenario generation. There also is a handy “oracle”-table that is intended to help quick adventure/locale generation – once more, not exactly groundbreaking, but helpful. We then see an applied example of what could spring from using this means of generation. This does note the respective entries and, while not super-exciting, makes for a solid excursion.

The next section is interesting and something that quite a few players should probably read – Player Missions and responsibility. This is a nice advice-section. Experienced players will be cognizant of the advice provided.

After this, we take a look at combat as based on deployment. The system presented knows Front., Body and Rearguard. This deserves special mention, as the basic system of the 3 zones is simple and presented in a tighter manner than all rules in issue #2 combined. You can use this. However, the system is pretty lopsided. Most OSR and d20 games are lopsided towards the offense, and this system exacerbates this, providing a -1 penalty per enemy present for the Front, while providing advantage on either damage or attack roll, player’s choice. This *can* be problematic depending on the realities of the game. If mêlée tends to gravitate towards the more lethal side of things, then this may make sense, but also amplify this. Balance is impossible to judge without a cadre of suggested NPC and monster stats, but in comparison to the other positions, it’s the strongest. Still, as a whole, this system is worth expanding further and switching zones is presented in a concise manner. The combat options presented are also nice for the most part, though here, rules-language once more suffers from some grating ambiguities: What constitutes, for example “better weapons”?

The pdf further adds to the offense side of things with the danger die – basically a d6 that grows as 13th Age’s escalation die, and then acts as a surge upon reaching 6. I like the idea here, but I think that some defensive options here would have been nice; a counterflow, if you will. Alternate death/dying rules are okay, though nothing special. Now, what I did like was the wound system: When a character is about to take damage, the player can take a wound – this reduces damage by 1d6, but one ability score is at permanent disadvantage until treated; 2 wounds can be taken for 2d6, 3 for 3d6. A PC can have up to 3 wounds, and only one wound per ability score may be had at one point. The second and third wound are the GM’s to choose. This system has promise and is really cool. Like it! Wounds may only be recovered when consuming a ration and succeeding a Constitution save – but doing so does prevent the usual HP regeneration! Wounds, thus, matter mechanically, but aren’t necessarily crippling. Easily my favorite thing to come out of the first 3 Black Dogs issues!

Know how I complained in issue #2 about morale not being codified in a general manner? Well, the rules are in this one. They are okay, but I still fail to see the improvement they offer over the standard morale systems out there. We also get stats for some soldiers and an old troll and his army of weirdo woodland critters. There is a brief mass combat sketch here, but it’s confused and not really helpful; using Hydra Cooperative’s By this Axe/Poleaxe or Lost Pages’ Burgs & Bailiffs-versions makes more sense. We also learn of the toxic ivy hazard. There are more stats to accompany an uprising, a skeleton sorcerer, etc. Now, the presentation here is a very sketch-like and unstructured; for future installments a more clearly laid out scenario would make sense, for while there are connections here, you need to piece them together. The installment closes with two nice, player-friendly maps by Dyson Logos.

Formatting is solid, and editing is still a far shot from good; however, the rules-language is better than in #2. It’s still a long shot from being good, but still represents a vast improvement. Layout adheres to a 1-column b/w-standard and the artworks, as before, are nothing to write home about; same grainy, overexposed photographs in b/w. The cartography by Dyson logos is the aesthetic highlight of the issue. The pdf has no bookmarks, which represents a major comfort detriment.

Davide Pignedoli’s third installment of Black Dogs, while certainly not perfect, is a VAST improvement over the second one; there are some nice ideas herein, and some rules that actually warrant pondering; there is potential here. At the same time, I couldn’t help but feel like this is changing in focus – it may be creature selection in the adventure sketches, but in this issue, the material felt more akin to vanilla fantasy than the dark fantasy/horror vibe promised in the first installment; not in the rules, but in the dressing and creatures depicted. I am not yet sure where this Black Dogs-series is going, tone-wise, but it’s something to bear in mind. Now, this is still suffering from awkward verbiage and some components that are VERY rough, but there are quite a few aspects herein that do show promise. In fact, I’d love to rate this slightly higher, but as a reviewer, I have to maintain a consistent rating-standard, and thus, in spite of enjoying some aspects herein, I can’t round up from my final verdict of 2.5 stars. If you’re willing to mine for a few components, then this is worth taking a look at.