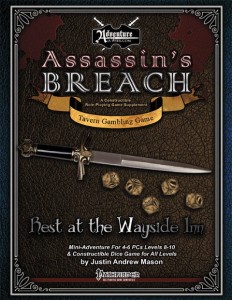 This tavern gambling game/adventure clocks in at 31 pages, 1 page front cover, 1 page editorial/ToC, 1 page SRD, 1 page back cover, leaving us with 27 pages of content, so let’s take a look!

We’ve all been there – the PCs are at a seedy tavern or casino and want to get information from that NPC over there at the table…so how do they do that? In most cases of published modules, the answer will boil down to “Make a Profession (Gambler)-check!” or a similarly meta replay. But let’s face it – actually gambling would be more fun, right? So this is where this game comes in.

Assassin’s Breach requires something every roleplaying table will have: 5 six-sided dice. If you’re like me and have even the tiniest spark of crafting ambition, you’ll certainly enjoy the full-color dice-templates you can print out and craft yourselves, though that’s certainly not required: When using a standard die, 1-3 equal “shield”, 4-5 “Dagger” and 6 equals “Skull.” The players of the game are called assassins, and they ante coins (which have handily been provided as print-outs as well) into the betting pool, called “Bounty.”

There are 5 quarry types that determine the stakes of a game of assassin’s breach: Pauper equals copper coins, noblemen equal silver coins, etc. – with kings obviously being represented by platinum coins. Determining who goes first works by Roll Call – to be counted here, you have to put a coin into the bounty. Once each player has entered a coin, roll call begins. Each player rolls one die once – whenever a player does not roll a skull, he is removed from roll call and does not go first. If no player rolls a skull, all roll again. If more than one player rolls a skull, all such players roll again – until one is left. This player goes first. Subsequent rounds do not require further ante.

One player is not betting on the assassination being a success – this is the mole. Only a player who wins the roll call may elect to be the mole. The choice must be made in the beginning and cannot be changed. The mole must ante a coin each time it’s their turn, but they roll no dice – instead, they wait – if all assassins are imprisoned or unable to continue, they receive the bounty. A mole unable to provide the ante loses. Beginning with the first player and running clockwise, the assassins begin attempting to kill the determined quarry.

The assassin rolls all five dice. If the number of daggers exceeds the number of shields rolled, the assassin has eluded the guards. If the number of shields rolled exceeds that of the daggers, the assassin was caught and need to ante up by increasing the bounty by a coin – if they can’t do it, they are imprisoned and out. If the assassin rolls 5 shields, he is also imprisoned, no means of bribing himself out by anteing up. 5 skulls result in a successful assassination and the player gets the bounty. If all assassins have been imprisoned, the bounty remains in place and a new roll call is started – only players who have participated in the previous roll call may participate in this follow-up round. The game ends when someone gets the bounty. Before you ask – the pdf does come with a self-assembly loot box in color as well.

All right, so that’s the simple, fast-paced gambling game presented herein. The pdf also does feature an adventure, “Rest at the Wayside Inn.” I will now cover the details of this adventure – thus, I urge the players among you to skip ahead to the conclusion to avoid SPOILERS.

All right, still here? Great! The Wayside Inn is not any old tavern – it is actually a tavern-shaped extraplanar sanctuary summoned by the artifact known as the bones of the weary traveler – these bones, obviously, would be the dice featured herein – and as they tumble and come up with all skulls, they provide a flashy boom -and suddenly, the inn is here. Alas, while these dice were created to serve as a sanctuary, unbeknown to the players, they had an illustrious past – which coincidentally saw them fall into the greedy clutches of a necromancer called Gyldamar. Necromancer beings what they are, he sought for lichdom and considered the inn to be the perfect phylactery hiding place.

Unfortunately for Gyldamar, Wisdom seems to have been his dump stat and thus, he did not anticipate an artifact botching his ascendency rite, resulting in an annihilated body and a very unhappy necromancer bonding with the very structure. Worse, this made the inn a kind of hotel California – every time the place is used, there is a decent chance the PC’s soul will bond with the structure – upon death, he’ll awake, sans equipment and with but a hazy recollection of the prior proceedings in the inn – becoming a new, permanent resident of the inn – unable to escape or properly be resurrected.

Every denizen that has become a permanent inhabitant is fully healed and restored whenever the inn is summoned – the beings herein can thus not be permanently slain – children, innkeepers, bounty hunters and celebrity bards (as well as their disenfranchised groupies) can be found in the inn – all trapped, though not all are cognizant of the extent to which they are trapped inside. The NPCs come with detailed fluff-write-ups that make running them pretty easy -and it’s very much possible, the PCs will interact many times with them before actually noticing the effects of the curse in the first place. The aforementioned artifact dice receive full-blown stats and actually are pretty nifty – I can’t see any loot-greedy group out there ever deciding to get rid of them without significant hesitation – and this is how things should be.

With multiple rolls sporting different magical effects, the dice certainly are a cool magic item. But back to the module – preferably after the PCs have established rapport and relations with the trapped denizens, you can spring upon them nightly visits of Gyldamar the Necrowight – the adversary herein. Seeing the denizens come clean -and at this point, a PC may have noticed after dying that he can’t exit any more…combine these for maximum impact. Anyways, defeating the necrowight isn’t too complex a task and thereafter, the denizens and PCs may elect to leave the inn for the afterlife awaiting – or remain inside… Which offers some cool narrative potential: Think about it: “I ask my former character!” can be a rather cool scene!

As mentioned before, the pdf provides constructible coins, a constructible bounty-box, coins ad dice and the Wayside Inn comes with a beautiful full-color map, of which a player-friendly version is provided.

Editing and formatting are top-notch, I noticed no significant glitches. Layout adheres to AAW Games’ beautiful 2-column full-color standard and both cartography and the art for the copious constructible components are neat indeed. The other artwork is solid. The pdf comes fully bookmarked for your convenience.

Justin Andrew Mason’s Assassin’s Breach is a pretty fast-paced gambling mini-game that can escalate (or end) pretty quickly, depending on the luck of you and your players. The significant amount of supplemental material is great as well – but on its own, this would be infinitely less compelling than when used in conjunction with the set-piece/adventure provided herein. While the default of the module assumes the action to end pretty quickly and is very much sandboxy, I think this “module” and its numerous NPCs work best when interspersed through multiple modules and levels – slowly building the locale’s wondrous properties, slowly making the PCs invested in the denizens.

If you manage to pull that off…well, then you’ve got a truly brilliant scene at your hands when the nature of the inn becomes apparent. Similarly, the artifact featured is a rather cool one. In fact, as a person, I absolutely adore this supplement, though less experienced GMs could have used some further advice and hand-holding regarding the juggling of the numerous denizens featured in the module/set-piece locale.

Still, this may not be particularly inexpensive, but it ultimately is worth the asking price if what I described above even remotely intrigued you – this has the potential to be pure, unadulterated awesomeness and elicit multiple WTF-reactions from your players. My final verdict will hence clock in at 5 stars and I’ll add my seal of approval as well…now to plot how to integrate the inn in my next campaign…

You can get this cool little tavern-game/set-piece module/area here on OBS!