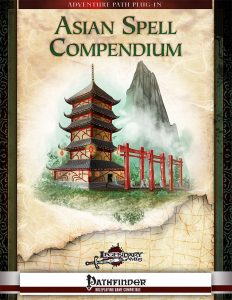 This massive collection of spells clocks in at 38 pages, 1 page front cover, 1 page inside of front cover, 1 page editorial, 1 page SRD, 1 page ToC, 2 pages introduction/how to use, 1 + 2/3 of a page advertisement, 1 page back cover, leaving us with 28 1/3 pages of content – as always in LG-books, we get a ton of content per page, so the pdf actually contains more material than you’d assume from the page-count.

Now, we begin with functionality – to be more precise, we begin with a means of making the book much more user-friendly: We not only get a list of alphabetical spell names, we also get a list of spells by class, organized by ascending levels in the respective class entry. Even cooler: We get a third spell list that depicts spells by school and descriptor. Need a language-dependent spell? Just look it up. That is a HUGE plus as far as I’m concerned. It significantly increases the chances of spells herein actually seeing use.

Ahem, now, theme-wise, this book is part of the series of pdfs intended for use with Jade Regent or similarly-themed settings and as such follows an aesthetic that is in line with WuXia movies and mediums, though a couple of the options herein should work as well in more low-key environments like Rite Publishing’s Kaidan setting. There are a total of 110 spells herein.

All right, so let’s take a look at these spells, shall? Ancestral wrath would be a 2nd level necromancy that calls an ancestral spirit that streaks towards a target in close range, hitting automatically and dealing untyped damage (boo!) that scales up to 5d6 for living beings, up to 10d6 for undead. It deals full damage versus incorporeal targets and an undead target damaged that fails its save is shaken for 1 round. Okay, so Fortitude partial – does that mean that only undead need to save and that the save negates only the condition? I assume so, but the spell could be slightly clearer there. Does this spell sound familiar to you by any means? Well, there is a reason for that! If you’re like me and really adored the Rokugan setting and Oriental Adventures in its various iterations, you’ll meet some old favorites here, updated and for the most part, streamlined. Considering e.g. Rokugan’s mechanics regarding jade, etc., the spells are more than just cut-copy paste with new classes thrown in – to use this example spell, we have it available for classes where it makes sense – spiritualist, medium, shaman, witch, cleric and occultist. It may be a small thing, but I’m a big fan of keeping the themes of classes consistent, so that aspect is a definite plus for me. (As an aside: The 3.X books never properly covered all the different, cool katas in d20-games…would love to see those. But I digress.)

Since this book contains a staggering amount of spells, I will not go into the details of each and every spell within, instead focusing on the greater picture and attempting to give you an overview, all right? Right! While we’re on the subject of death, often less permanent in the mythology than we’d assume, awakened from death represents narrative gold: The target awakens from death temporarily, feebleminded and with hazy memories. An undead was walking down the road, not knowing why…and yes, this would fit it pitch-perfectly with Kaidan.

A low-level means of generating an enemy-only targeting shaken effect via an illusory mask, an army of unseen servants to cater to your every need – I can see the spells herein work formidably in settings like Jade Oath and beyond. Interesting: There is a spell that makes partially wooden weapons turn around to attack their wielders. Fully metal weapons are not affected. Why? Well, think about the modified elements assumed in such settings and it makes sense. It’s a small component, but it adds to my immersion here. A blackblade katana bestows temporary negative levels and yields the wielder temporary hit points; the dark nature of blood magic as a form of spellcasting can also be found in e.g. the bleeding fire spell, which nets a magic missile like fire-based effect with higher damage output, chance to set targets ablaze, etc. – and yes, it makes sense at the level of the spell.

The classic blessed jade strike makes a return. There also are mechanically really interesting spells here – take focusing/centering form: These two spells can be cast as a swift action and interact with another spell being cast, enhancing concentration as it is cast or wholly allowing the caster to make the unconscious mind take care of the concentration required to maintain the spell in question. There is a high-level spell to conjure forth a cloud barge or a resplendent cloud of fog of light that dazzles targets and really hampers any creature not used to its light.

Now, some may remember cobra spit – it’s a 10-ft. cone that causes 1d3 Con-damage on a failed Fort-save, additionally dazzling targets and blinding them on a natural 1. I took this relatively simple spell to highlight how it makes sense: The ability score damage is sensible for the 2nd-level spell; the classes that get it are druid, alchemist and witch and it has the proper descriptors, classifying it as poison. In short, it gets all those small details right that you’re liable to miss when doing conversions yourself. Did I mention the 9th-level Colossus that grows you to a MINIMUM of Colossal size? Yes, you can attempt to fist-fight that kaiju….but oddly, the end of the spell mentions you “shrink”ing – that should be “grow.” I assume that’ s due to the wording being partially copied from the reverse version, greater diminution. (As an aside: Everyman Gaming’s Microsized Adventures really helps with dealing with massive size-changes.)

Speaking of high-levels: Clerics with access to 8th level spells can force permanent alignment changes on targets that fail their save versus compulsory conversion. There is also an interesting fire-based high-level spell that uses a save and a HD-cap, but can yield what otherwise only death effects can provide: Save or die. It’s 9th level and takes a full round to cast, though, making sure that its use remains limited to a degree.

The pdf also includes variations of spiritual weapon with a stacking, capped misfortune-curse added, dancing weaponry and a rather helpful spell that allows you to analyze the nature of a curse currently affecting a target. I am not the biggest fan of doubled range increments for ranged weaponry, but how could I not like a cloud of fireflies that renders targets drowsy? An old favorite of mine has also been recovered and converted – fault line causes bludgeoning damage (properly codified) and also acts as a light terrain control spell with its difficult terrain creation. Cool: Ghostly glow represents an eerie variant of dancing lights that interacts with Horror Adventures’ spooked condition. (And yes, once more, perfect fit for Kaidan…)

Glory of the Chrysanthemum Throne may be one of the coolest high-level spells within: It creates innumerable, daylight-shedding ghostly flowers that detonate upon contact with evil creatures, while also providing a miss chance. Oh, and you can designate a rightful person to sit on the thronw who gains a really brutal buff. Amazing 9th-level spell.

Inscribed enemy is interesting: You designate a target and enchant a weapon (NOT ammo!) – the weapon’s first hit versus the target is treated as though executed by a +1 bane weapon. I also loved the visuals of jade prison, which slowly encases evil in a jade statue. I also enjoyed how a couple of the spells herein have been designated as koans, which adds a bit of flavor to their effects. The codification of magnetic ray was also something I rather enjoyed seeing here. Ridiculously funny: Marvelous chopsticks. Think of them as a Bigby/Hand-spell variant that deposits targets in extradimensional spaces, where they are chewed. On the low-level end of the spectrum, I loved meltwater or the nonlethal enforcing merciful mandate. What about making a ladder from smoke?

Fans of rokugan’s shugenja will certainly appreciate the return of phoenix wings. Punji pits make for nice terrain control and a mist that can clean up harmful vapors is a long overdue spell-based counter method for the vile miasmas. Remove fatigue is a spell I see with a degree of skepticism, since it explicitly suppresses further instances of fatigue incurred, which allows for rage cycling etc., banning the spell at my table. Seize the Heart, on the other hand, looks OP at first, but isn’t: The spell can instantly kill a target on a failed save, which, at spell level 3 or 4, is nasty – however, a HD-cap helps keep it in line and instead makes it a great mook-sweeper. What about making scarves lethal…and potentially decapitating targets with them? Yeah, thought you’d enjoy that! And yes, there is a tengu fighting fan that not only nets you an item – you can decrease the remaining duration for special combat tricks. I love this type of versatile design.

Snake arrows do pretty much what they say on the tin, and I probably will not need to explain either Terra Cotta Legion or Lions, right? Quite a few of the spells within interact with spirits and the spirit world, which is nice to see, as it better reflects the realities of most Asian settings. Sublime detachment is a great form of almost-enlightenment high-level means of fortifying against emotions, but also prevents morale bonuses. What about transforming items into origami? Yeah, players will really like that happening to their blades…MUAHAHA. Sorry. Had a bit of a moment there.

It should be noted that the pdf provides an optional rule to make identification of these spells harder when encountered outside of their usual cultural context.

Editing and formatting are very good on a formal and rules-language level herein, though not as perfect as in many LG-books. Layout adheres to the nice 2-column full-color standard that the Jade Regent plug-ins employ. The pdf comes with bookmarks for the chapters, but not for the individual spells or at least beginning letters – it could be slightly more comfortable here.

Jason Nelson delivers a love-letter to oriental Adventures here, with a massive selection of unique and colorful spells that breathe the spirit of WuXia. Their mechanical representations are rather nice, and I’d allow the vast majority of them in my game. While I don’t get how a glaring oversight like remove fatigue could happen, the vast majority of the book is precise, concise and interesting. The book provides a rather impressive array of complex spells, many of which sport neat visuals, mechanic, or both. In short, this is a good collection of spells, one well worth owning. My final verdict will clock in at 4.5 stars, and though I do feel that this one is closer to the 4 and 5 stars due to the heavy quoting of Oriental Adventures, as a reviewer, I do have an in dubio pro reo policy and hence will round up.

You can get these cool spells here on OBS!