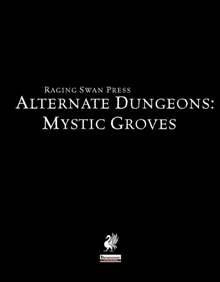 So what is this? Well, we’ve all been there – the oomphteenth cavern/dungeon/mine is only so exciting to explore – sometimes, one needs a change of scenery – and exactly that would be the task of this pdf – it begins with the general scene-setting: Whether by the powers of druids, fey or what have you not – mystic groves are essentially forest dungeons that require special considerations – like flight, the dimension and location of trees, etc. – something the pdf manages to address nicely, while also providing additional complications like making the dungeon sport a confounding haze that limits sight, render the trees intelligent (and the dungeon thus mobile…ouch!) etc.

Beyond these basic considerations, the tracking, underbush, natural hazards, a table of detection DCs to be noticed by wandering monsters while fighting – the advice given is concise, solid and helps prevent glaring oversights that might otherwise have resulted in face-palm-worthy moments.

Now suggestions for appropriate treasure in the guise of materials and alchemical ingredients are provided alongside 3 suggested functions to serve as the reason why the place exists in the first place. Now the cool thing about the dressing table would be that suggested DCs to harvest them are provided – 40-entry-strong (plus an entry for roll twice/thrice) can be found here – from fruit growing animals to crystalline growths to animals being born here with DR, the respective entries have more tie-ins with mechanics than in the dressing-pdfs – which is a good thing in this context.

beyond these, we also receive quite an extensive list of suggested adversaries to use to populate the grove, while suggested traps (including two new ones) allow you to further modify the dungeon alongside glyph of warding-duplicating mold and similar hazards. Should you require further inspiration- while one should probably be called “BLightbringer”, not “BRightbringer”, the three general hooks are nice.

Alexander Augunas’ Mystic Groves are cool – the general idea-kit/tool.kit provided herein make constructing a truly uncommon dungeon relatively easy on the DM and the wealth of ideas is pronounced and nice. However, as an early installment in the series, I also feel that this pdf could have used an additional piece or two – expanded terrain-features to drop in, especially efficient tactics (by PCs and adversaries) to be wary of – something like this. As written, this is an inspiring little toolkit, but one that falls a bit short of perfection and what it could have been. My final verdict will hence clock in at 4 stars.

You can get this cool toolkit here on OBS and here on d20pfsrd.com’s shop.