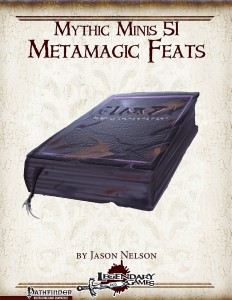 -Coaxing Spell: Affect mindless oozes and vermin as well as sentient creatures. You still can choose to affect only one type of adversary, providing a penalty to the target’s will save. As minor nitpick, the minus herein is not properly displayed, though that does not impede the ability to understand it – btw., this glitch that displays a strike-through box instead of a minus extends to all instances where a minus should be in the pdf. Can be spontaneously added via mythic power akin to Burning Spell. This extends to almost all of the feats herein, so no, I will not mention is for every one of them.

-Concussive Spell: Adds Ac-penalty to the insult of the feat and makes target risk falling prone, with standing up being not as simple as usual -standing up may see you falling back prone. Nice one.

-Consecrate Spell: Spell level consecrate added; creatures targeted count as consecrated. Very interesting, not necessarily on a hard number basis, but on a narrative basis. I like it!

-Echoing Spell: Now we’re talking – get the full spell as a1/day at-will SP. Can be spontaneously added via mythic power akin to Burning Spell. This is simple, yet awesome and manages to get even the focus-requirement right. Love it!

-Flaring Spell: Add blind and dazzle to the spell. Solid.

-Jinxed Spell: Jinx up to 1/2 mythic tier creatures with jinxed spells. Additionally, a creature that makes its save can be targeted by your halfling jinx, with a normal save. Nice one!

-Seeking Spell: Use this in conjunction with ranged attacks or ranged touch attacks or with Ref-save allowing spells, ignoring cover-bonuses. This one allows for some fun tricks – nice!

-Shadow Grasp: Add dazzle to the entangle condition. Shrouded creatures gain concealment against foes more than 5 ft away (10 ft. for creatures with low-light vision, no effect versus darkvision). Okay, I guess – the feat’s secondary effects have some potential when used in conjunction with Stealth/shadow-characters.

-Tenebrous Spell: + mythic tier to concentration checks made to cast the Tenebrous Spell in bright light. Attempts to dispel such a spell only get a bonus of +2, while you conversely increase CL and save DC by +2 for you when casting it in darkness or shadows and penalize dispel checks by 4 in such areas. The feat does reference Umbral Spell instead of Tenebrous Spell once in a harmless cut-copy-paste-glitch.

-Threatening Illusion: Select any number of 5-foot squares within a figment you create, making the squares count as threatening regarding flanking etc. The feat gets combat maneuvers et al. and interaction right and the balancing via spell instead of feat is downright genius. One of my favorites herein.

-Threnodic Spell: Affect living and undead at the same time or penalize one type’s will-saves for a number of rounds – essentially a copy of Coaxing Spell in that regard, though you may not choose the living.

-Toppling Spell: +1/2 mythic tier, min. 1 to CMB to trip creatures. Unique and awesome – add +2 to checks to topple targets adjacent to a target you’ve toppled, including stacking and getting the complex rules-language here right. One of my favorites – awesome!

-Umbral Spell: The target radiates deeper darkness (with a special caveat for cantrips). Unique and elegant.

Editing and formatting are very good, I noticed no significant glitches, only the aforementioned cut copy paste error and the strange minus-layout-glitch. Layout adheres to Legendary Games’ 2-column full color standard and the pdf has no bookmarks, but needs none at this length.

Jason Nelson’s Metamagic feats were a surprise to me – while I expected the mythic power to cast spontaneously angle employed by most of them and while I get certain analogues among the respective feats, I did not expect to actually enjoy some of these feats – there are quite a few examples that go beyond what one would expect, providing some unique tactical options. While not perfect, this is still a very good pdf, well worth of a final verdict of 4.5 stars, rounded down to 4 by a tiny margin.