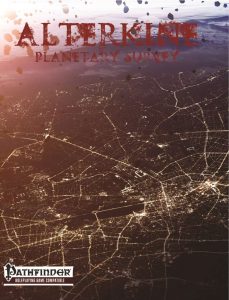 So, this massive book is basically exactly what it says on the tin – a ginormous collection of different planets and their inhabitants.

There are basically three sections for each of the entries of planets here: Astronomical, Environmental and Xenological.

In the first section of each planet, we classify the star or stars – for example,.Dwerradar has a binary star, Myrwyn and Aru. Now, if you’re a bit of a scifi-nerd, you’ll love these, for each star gets a star-statblock of sorts: The type is noted (e.g. Companion MV 7 V Red Dwarf), and we get distances in kilometers and AUs, radius in kilometers and Sol, mass in kg and Sol, temperature in K and luminosity in W and Sol. I really love this attention to detail, and it extends to the other system bodies, who are classified by type, with orbital radius (again, in Km and AU), period (hours and earth years) and gravity in m/s² (once more, with relation to earth noted as alternate values). Terrestrial worlds note the respective composition and special features like indigenous races and moons.

The environmental sections for each planet provide notes on aquatic, terrestrial and atmospheric peculiarities as well as places of interest, if any. It should also be noted that we actually get really nice full-color artworks for inhabited planets, which is a huge plus; indeed, the book manages to be really, really impressive regarding all its details and how the respective star systems deviate from one another. The data provided really helps to create a cohesive sense of immersion if you, like me, enjoy the added sense of plausibility this adds. So yeah. Kudos indeed.

This would also be a nice place to note that the book has an appendix that lists monster traits, creature types and vital statistics of age. The index mentioned before is really detailed and useful, providing orientation by place of interest, by planet, race and system. Organization of the book is neat.

Thirdly, there would be the xenological section, and it is here that we are introduced to the respective races living on the inhabited planets. Here, we can find 4-armed, red goblins, bone-ridged, badass equine creatures, the Tiny, subterranean Adaevia, basically Wookies, savage lizard people, utterly strange species that descended from tubeworms (!!), living constructs and more. We can find a race of excellent healers, which, when it dies, spreads a horrid plague; we can find sentient plants (bushes, fungi, etc. – and yes, there is an artwork with a badass fungus-person wielding an MP), a race of basically space wolpertingers, spiritual newt people, massive, Large, smelly space orcs, a race of Jekyll/Hide-y aberrations, bird- and otter-folk, 6-armed humanoid arachnids, actually nice lumps of tentacles, dog-like trees, vulture people…and I haven’t even begun listing them all. We get brief notes on the respective society and culture of the races. Really cool: We get a .ppt-file included in the deal to make basic paper-stand-minis for the races! Big kudos there!

…and it is here, that we have the crux of the book. The races. Now, up onto this point, Alterkine supplement were made for d20 Modern.

This one is different. It is billed as PFRPG-compatible.

That is patently WRONG.

There is no nice way to say this, but this is about as PFRPG-compatible as 5e. If there is something to be done wrong regarding racial presentation and rules-design, the pdf will do it wrong. Each language section, for example, notes a “Free Culture Skill” – whatever that is supposed to mean. Ability score enhancements are min-maxy and don’t follow PFRPG’s paradigms. We get uneven score-bonuses (like +1 and +3); we get +4 bonuses and penalties to ability scores in a variety of cases. A Large race gets +8 (!!) to Strength, not accounting for its size. The same race’s females get btw. “+ Intelligence” – the actual modifier is missing. Natural weapons are not properly classified in some cases, whereas in others, they are. Racial abilities sometimes sport fixed save DCs instead of scaling ones.

For f***’s sake, the book gets NATURAL ARMOR wrong, talking about “+3 bonus to Defense.” PFRPG has over 20 bonus types, accounting for BAB, etc. – and the book manages to get that wrong as well, conjuring up some make-belief bonus types that are utterly redundant. There is no “species bonus” in PFRPG – it’s called racial bonus, for crying out loud. Never mind that the concepts of CMB/CMD obviously are not something taken into account for any rules operation that is more than a size reference. The pdf talks about skills that don’t exist in PFRPG, like Athletics. Bonuses that should be racial or insight are untyped. The pdf grossly undervalues e.g. additional appendages. When a DC is scaling, its sequence is wrong, noting first the ability score, then HD. The pdf doesn’t get how pulling targets works in PFRPG. “Infiltration checks” may be used to break free of webbing. Darkvision ranges are incorrect. A “Staggering gaze” causes the stun condition. Abilities do not sport the correct ability types – you won’t find EX or SU/SP-classifications here. The pdf does not understand how Linguistics works in PFRPG. There are glaring errors and huge issues in every single damn race herein.

Then again, frankly, I’m glad we don’t. I have never seen basic race design go this horribly awry. It is evident that the author has no clue about PFRPG and doesn’t play it. The level of ignorance that the glitches point out, is staggering. Frankly, I wished that this book had stayed with its d20 Modern roots.

Editing and formatting, on a formal level, are mostly rather impressive. On a rules-language level, this is an unmitigated train wreck. Layout adheres to a 2-column full-color standard and the pdf comes with a significant array of really nice full-color artworks for planets and races. The pdf comes fully bookmarked for your convenience and the addition of paper stand-minis is neat.

This breaks my heart, it really does – on one hand, we have a book oozing creativity and passion, and a knowledge on how to make unique and compelling racial concepts. I loved all the data provided for systems, and the ideas herein are glorious! They really are! If you want a dressing book with brief dossiers on a variety of races and systems, this may well be worth checking out for that purpose! Whether you play Traveller or Starfinder or Stars Without Number, there are a lot of cool *ideas* in this book.

Unfortunately, this is no system neutral dressing book.

Unfortunately, this book suffers from the delusion of being a PFRPG-race book. In this category, this book, alas, is a resounding, colossal failure. Rules-integrity and both basic overt and detailed covert design paradigms are flaunted left and right and the book fails to grasp even basics like the skill system, much less anything more detailed. I could literally spend multiple pages listing what is wrong with each single race. The crunch is horrible and a sloppy conversion from a system into PFRPG, without the knowledge or care that such work requires.

As a crunch-book, this is a failure of epic proportions.

Now, if you explicitly do NOT want any rules to go along with the planets and racial CONCEPTS, then this may be worth checking out. Some of the ideas herein are pretty damn cool, though none of the races, courtesy of the brevity of the entries, gets a really detailed write-up. This is the only viable use for the book I could discern.

Whether you play Starjammer, Aethera or another scifi/space opera game in PFRPG, this one fails you, big time. It obviously doesn’t fare better, rules-wise, regarding Starfinder. In that discipline, the book is an unmitigated mess I cannot recommend. My final verdict will clock in at 1.5 stars, and frankly, I can’t round up for it. The fluff is too sparse for that.

You can get this book here on OBS. Don’t say I didn’t warn you.