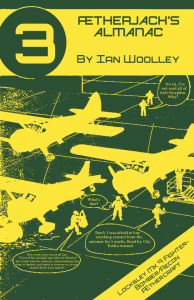 This installment of the Ætherjack’s Almanac-zinis clocks in at the usual 2 pages – if you print it out and fold it in the middle, you’ll get a neat pamphlet of 4 A5/6’’ by 9’’-pages, with one front cover, so three pages of content – this time, though, I probably wouldn’t fold it, since two of the pages sport the artwork for the Locksley MK 9 and its stats in a full-page offering on the second page – the most prudent way of thinking about this pdf thus would be to consider it a 1.5-page offering.

The Locksley MK 9 fighter/bomber æthercraft comes with full stats according to the guidelines laid out in #2 of this series; it can house a crew of up to 2 people, can be fueled for 5 hours of operation, and has a maneuver rating of 2, a ship rating of 8, armor 2 and 55 Hull. Its weaponry is interesting, as we have a forward-facing fusil, and swivel-mounted twin-fusils for the gunner. How are these used? Well, the pdf does make that clear – nice! We also get notes on tonnage, length and wingspan.

The æthercfraft also has a bomb-magazine with two sizes of bombs (small and large), and notes that variants are possible, including a removal of said bombs in favor of additional seating. Damage-wise, I am not sure where to place the bombs. I do think that the bombs are intended to default to Troika’s standard values for creatures (Small and Large beastly weapon damage tables), but getting proper stats here (or a note of the like) would have been nice.

This obviously opens up a couple of questions, which the pdf then proceeds to answer: The low fly time makes this a dogfighter, which is also evident in the high SR. This, though, is contingent on good fuel, and the pdf notes that similar engines might be pushed in similar manners, alongside comparable values for unpowered sailing/gliding, which is a really neat expansion of the base mechanics.

Also interesting: The open cockpit, which allows for the direct targeting of pilot and gunner, but the rules still provide a benefit to the people inside the vessel. Also important: Unlike big, full-blown ætherjammers, these vessels have armor on the scale of persons and use anti-person weapons, which are defined as having a range of one hex, and attack with disadvantage beyond that range. On the plus-side, ship weapons also attack with disadvantage against personal æthercrafts like this.

But what is disadvantage? Well, that’s defined as well: Rolling three dice and keeping the worst two.

The pdf closes with some previews and shoutouts.

Editing and formatting are good on a formal and rules-language level. Layout adheres to a two-column standard on the first page, with the second devoted to a full-page spread of the æthercraft and its stats – this time around in green-yellow. As before, a more printer-friendly b/w-version is included – kudos for that! The pdf has no bookmarks, but needs none.

I am starting to *really* like Ian Woolley’s æthercraft rules! Where the global ship rules in volume two were super-impressive, this pdf provides something just as compelling – an extension of the engine to encompass smaller vessels on a personal level, so if you want dogfighters whirring about a dreadnought. You can have that! This also makes characters fighting small æthercrafts as bosses etc. (think Metal Gear Solid…) a possibility, and it manages to achieve that with precision. My one gripe with this pdf would be the lack of stats/definition for bombs…but if you like the engine proposed in #2, you’ll have fuel-based boosts and dogfighting added here…and that’s darn cool. As such, my final verdict will be 4 stars.

You can get this cool zini here on OBS!

If you enjoy reading my reviews, please consider leaving a donation, or joining my patreon. Every bit helps.