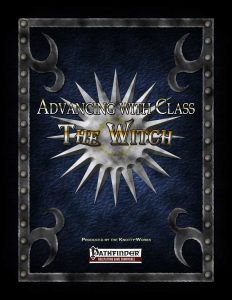 This installment of the Advancing with Class-series clocks in at 27 pages, 1 page front cover, 1 page editorial, 2 pages of SRD, 1 page advertisement, 1 page back cover, leaving us with 21 pages fo content, so let’s take a look!

All right, after a brief and solid piece of introductory prose, we begin with 5 different patrons, with 3 being tied to fey, one representing a more scholarly bent and one being an antithesis of winter. More interesting than these (though their spell selection is pretty interesting) would be the metric ton of hexes that can be found herein, which are further categorized by theme – Eldritch, Fey, General and Shadow would be the respective leitmotifs. Fey hexes are restricted to fey with a fey patron, shadow hexes are restricted to witches with the shadow patron – simple and makes sense, though, as a minor complaint, last time I checked it was “patron” and not “patron theme” – but that’s just cosmetic and hence will not influence the final verdict.

Now eldritch hexes are basically a means of grafting a warlock-like blasting chassis on the more utility-centric witch; this is primarily done via the hex bolt hex, which causes 1d6 untyped (*sigh*) damage per 4 class levels, with a ranged touch attack to hit, a range increment of 15 ft. and a maximum of 10 range increments, which, while a bit rocky considering its behavior, can be considered to be somewhat of a balancing thing. Now, where the verbiage becomes confusing is when it spells out that the bolt is considered to be magic and thus bypasses DR – the wording can be read as ignoring all DR, not just DR/magic. Only one such bolt may be fired at any given round, regardless of iterative attacks. The bolt is treated as a 2md level spell for casting defensively purposes and is not lost on a failed check, but rather receives a penalty to attack The second major theme to be found among these hexes would be the hex forged hex, which lets you weave untyped bonus damage into melee or natural weapons (not unarmed attacks? Why?). Taking a cue from kineticist wording, there are also infusion hexes, which can be applied to either hex bolt or hex forged, with the exception of energy infusion, which replaces the base energy type of a hex bolt to one of the base energies or “sound” -which does not exist. It’s sonic. Energy infusion hex bolts apply resistance, but ignore SR and the other infusions net deafening, frightening, blinding or sickening properties to the bolt. Higher level hexes add further effects to choose from.

Weird, btw.: Neither major, nor grand hexes sport the distinction by hex type in their respective arrays, with the major hexes building upon hex bolts providing cones, fireball-like long-range exploding bolts as well as a weird Cleave-y modification. These, alas, do also sport some oddities: A maximum range of a non-range-modifying bolt, for example, contradicts the maximum range of hex bolt. Similarly, the shaping modifications do not specify whether infusion-type hexes affecting hex bolts work with these shaping tricks. While, unlike the annoyingly infinite hex bolt, these do have a hard cap, I am frankly not sold on the whole sequence. I’ve seen warlock-y classes done better than this graft, which feels like a basic attempt for some blasting capacity that could have been refined into a mighty engine…but wasn’t. When compared to e.g. Interjection games’ ethermagic or kineticism, it also promotes doing the same each round, namely blasting. Not a fan and the deviations from standard rules-language are fatal in such a chassis.

The fey and general hexes feel more “witchy” in tone to me and ultimately, to me, are the better examples from a design perspective: Here among the general ones we can find hexes to hamper spellcasting, the ability to deliver messages via avian messengers, the option to pass unimpeded through rough terrain or undergrowth sans taking damage or gaining a mildly toxic nettle-skin. Spitting iron nails at short range that may bypass mage armor et al. is a cool visual. That being said, e.g. the traveling itch could have used a bit of a power upgrade – a -1 penalty to atk for class level rounds does not warrant taking. Also: There are no typed penalties in PFRPG. Interesting – there is a touch that nets the witch and allies bonuses versus the recipient, with the major hex providing an AoE-version of deep slumber, thematically codified as a faerie ring around the witch…while only one such ring may be in effect at a given time, it basically exacerbates the sleeping issue that riled up so many GMs, though personally, I consider it valid…but I wished its wording was slightly more refined. Among the fey hexes, there is an AoE-20 ft-gaze that kills standard actions of targets and a nice sequence of hexes that blinds the target selectively to the witch, which is pretty cool.

The shadow hexes…are basically every shadow-themed class ever. Cloak weapons in shadow for damage-bonus? Check. Stealth-bonuses? Check. Minor sneak attack? Check. They’re not that bad or problematic, but neither do they blow me away when compared to the better takes on theme. The feats contained in the pdf mostly concern themselves with witch multiclassing, but also sport better attacks via staves or brooms as well as enhancements of new hexes or archetype abilities.

The new archetypes herein follow a similar trend: The Eldritch Witch, for example, would be, surprise, the archetype for hex bolts/hex forged, with the fey-touched witch the specialist for the fey-themed hexes, one that receives a fey familiar, whose table collates two levels per row, which is slightly problematic from a RAW/convention-perspective. The harrowed harlequin is interesting and receives several social skills as well as a gremlin familiar. Weird: Adding damage to feint attacks at high levels is a bit wonky in its implementation…and does not specify a range, whether only the witch can use it for her own feints, etc. – after all…you don’t want to get into melee with a full caster. The madness matriarch may cause insanities and the mystic astrologer is one of the more interesting ones, sporting some solid fate-based rerolls and similar abilities. The high-level option to negate actions retroactively, gained at 18th level, is pretty cool in theory, but its wording is mega-opaque and needs clarification.

The occult scholar receives more brainy skills and is a expert scroll-user, while the shadow mistress, bingo, would be the shadow hex-themed archetype of the collection. The pdf concludes with 3 sample characters, 2 at CR 4 (elven fey-touched + human madness matriarch) and a CR 8 serpentfolk eldritch witch.

Editing and formatting are issues on a formal and rules-level. From apostrophe-hiccups and similar typos, the pdf lacks italicization for pretty much every spell and violates rules-formatting in several instances., rendering the content more opaque than it should be. Frustratingly, not to the point where the pdf is not operational, mind you…but yeah, you’ll have to reread some passages and will stumble over oddness here and there. The pdf adheres to a 2-column, full-color layout-standard with decent stock art. The pdf is internally hyperlinked and fully bookmarked.

John Buckley’s take on the witch is frustrating to me: It takes several cool concepts and proceeds to sport some really ingenious tricks: The nail-spitting, for example, is amazing from a visuals point of view. At the same time, it contains some serious filler and…well…didn’t blow me away. I’ve seen warlock-y blasting done better numerous times; I’ve seen shadow done better numerous times…and the hiccups in formatting and verbiage make some components…well. Weird. The internal balance is also somewhat inconsistent, with some hexes being clearly significantly weaker than others.

I don’t hate this pdf. It does have some gems and if you’re willing to iron out some of the verbiage glitches, you’ll find some seriously fun concepts herein. At the same time, I can’t see the pseudo-warlock graft exciting anyone when there are better options. Same goes for the shadow tricks, rendering a significant portion of the pdf…kinda obsolete and slightly redundant from a thematic point of view. In the end, I can’t go higher than 2.5 stars, rounded down.