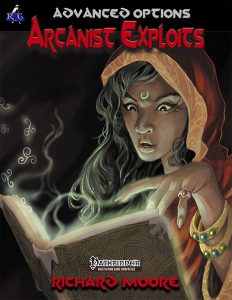 This installment of Rogue Genius Games’ Advanced Options-series clocks in at 12 pages, 1 page front cover, 2 pages of editorial/SRD, leaving us with 9 pages of content, so let’s take a look!

The pdf does not lose a lot of space before diving into the new options presented for the arcanist base-class, and neither will I. The options contained herein allow an arcanist to spend 1 point of his arcane reservoir to temporarily enhance the physical attributes of the arcanist, with a nice option to immediately end the effect prior to its regular expiration as an immediate action for single buffs to values like AC/CMD and even heal ability score damage to physical scores. There is similarly a second exploit for the mental attributes. Immediate action rerolls of saves versus spells or spell-like abilities can also be found. Or what about an exploit that causes damage to those that successfully disbelief your illusions. A nimbus of dazzling power that increases in potency at higher levels? Yep.

Gaining temporary hit points for energy prevented by the energy shield? Yup. What about the option to expend arcane reservoir and unused spell slots to heal the undead. Higher level options include generating damage die rerolls of 1s and 2s or enforcing multiple rolls and taking the worse result. A reactive shield that provides a means of protection in the surprise round also is rather neat.

The pdf does not stop there, though – within these pages, you’ll also find a selection of archetypes, the first of which would be the bloodletter, who gains an arcane bonded athame in lieu of consume spells as well as a significant array of unique exploits that allow for the self-buffing (including ranger-ability-poaching). Odd: A less expensive, arcane reservoir-powered permanency does mention a target creature’s blood, even though the exploit itself does not mention such a creature. Scrying via blood samples and alleviating ability score damage via blood and arcane reservoir points is also pretty intriguing. Powerful, but interesting: Dying creatures can be off’d for arcane reservoir regains…and yes, the ability is kitten-proof, since it requires ever increasing HD from the creatures it’s used on.

The second archetype would be the galvanist, who may use his unique exploits to bolster constructs and hijack constructs. DR-reducing attacks, golem-like placing of scrolls in the mouths of constructs (bypassing the construct’s magic immunities) or temporarily imprinting an alignment on a construct render this an evocative, cool archetype.

The thriomancer may study creatures to gain an insight bonus to atk and damage against them instead of consume spells and replaces 5 exploits with progressing erudite strikes, which are similar to insightful strikes or sneak attacks and scale up to +5d6. Now here is the cool thing about these guys: Their exploits allow them to, for Cha-mod rounds, emulate a spell or supernatural ability he has witnessed, with the creature’s daily limits, arcane reservoir and base creature HD as well as action economy providing the tight limits that are required by such a powerful ability. Yes, later with reactive option. And yes: AWESOME. This is a functional, balanced blue mage. Two thumbs up!

The wandmaster may spend arcane reservoir and a spell slot to activate a wand sans consuming the charge, thus replacing consume spells. They can also learn to fire a wand on the run, counterspell wand spells with the counterspell exploit (or wands) and even activate two wands at once, but at a hefty arcane reservoir cost. The other exploits, obviously, deal with wand metmagic etc. Once again, pretty cool concept!

The ward weaver, then, replaces consume spells with teh ability to generate warding charms versus specific schools of magic…and then, things become interesting: These guys can fashion wards that discourage enemies from taking specific actions, dealing nonlethal damage to the offenders. And yes, the rules-language is sufficiently precise. Shielding symbols, temporarily enhancing these tricks, sending magic they’re warded against back on their foes – this archetype does A LOT of the nique things we know from fantastic literature, codifies them in a great manner…and may be worth the asking price on its own.

Editing and formatting are top-notch, I noticed no significant glitches. Layout adheres to Rogue Genius Games’ two-column full color standard and the pdf’s artwork is solid stock art. The pdf comes fully bookmarked for your convenience.

Okay, confession time: I don’t like the arcanist. I think the class is pretty much soulless and not distinct enough from wizard, witch and sorceror. I playtested it, realized what it can do…and moved on. Why? Because it did not inspire me to make any characters with it. Sure, the mechanics are there…but I didn’t see the “wow-factor”. Suffice to say, I did NOT look forward to reviewing Richard Moore’s arcanist exploits. And indeed, the exploits in the beginning, while nice, continued the tendency of providing cool rules-operations without that much of a unique concept behind them. They are good design, mind you. Very good, even. But not inspiring.

Enter the friggin’ archetypes. If the above was not ample clue – it is my fervent opinion that these archetypes provide the distinct identity I always wanted to see from the arcanist. The archetypes, more often than not, are pure genius in the way in which they translate iconic concepts from literature to game mechanics. In fact, even if you do not have the ACG or have banned it in your home-game, this pdf is totally worth purchasing for the ability scavenging alone – a capable designer can reappropriate the unique options of these archetypes and exploits for other classes and designs. Yes, they’re that good. Oh, and, to make that VERY clear – arcanist players NEED to get this glorious little pdf – it provides the much-needed “See what I did there, wizards and sorcerors?”-uniqueness the class sorely lacked. It makes the arcanist feel like it has more of a concise, unique identity…and what more can you ask from humble 9 pages? My final verdict will clock in at 5 stars + seal of approval.

You can get this inspired book of crunch here on OBS and here on d20pfsrd.com’s shop!