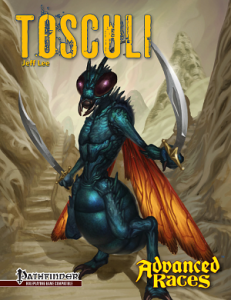 This installment of the Advanced Races-series clocks in at 14 pages, 1 page front cover, 1 page editorial/ToC, 1 page SRD, leaving us with 11 pages of content, so let’s take a look, shall we?

So, what are the Tosculi? Well, the simple reply would be that they are lethal wasp-people that sports a dread hivemind, nigh-sociopathic towards all but the members of their hive-cities…but much like NeoExodus’ Cavians, there are those that resist, the non-conformists – these hiveless tosculi, de-coupled from the free-will breaking militaristic society. Rules-wise, Tosculi get +2 Dex and Wis, -2 Cha, are small, have a movement rate of 30 ft. They also get 2 primary claw attacks at 1d3, +1 to AC, always treat Stealth and Perception as class skills and may share squares with other tosculi sans penalty. They also get gliding wings and may soften earth and stone 1/day as a SP. The class also has an alternate racial trait for gliding wings to bring them from 11 RP to 10 RP – absolute kudos here!

The tosculi also feature 4 alternate racial traits – scaling tanglefoot spittle, a primary 1d4 bite, better AC…or detect thoughts as a SP…but at the cost of increased susceptibility to mind-influencing effects. All of these are perfectly balanced versus the race’s base tricks. New favored class options for alchemist, brawler, druid, fighter, monk, rogue, slayer and witch similarly are well-balanced indeed – no complaints here either!

Of course, we also receive racial archetypes, the first of which would be the war-warper alchemist – instead of swift alchemy, these guys get a functional stinger, which can be used to deliver pre-prepared poisons…and at high levels, they may insert a cancerous, evolving mass into targets that can utterly cripple adversaries – icky and awesome! The Hivemaster druid can gain the vermin subdomain via nature’s bond or a vermin companion. Obviously, empathy for vermin, vermin shape wildshapes and a high-level swarm-form round out the archetype for a solid take on the concept, if not one that blew me out of the water.

We also receive information on 3 different types of equipment: Abdominal spikes, blinding powder and tosculi paper (slightly resistant to fire) are interesting indeed. We also get 5 racial feats, two of which allow for better gliding via the wings and even altitude maintenance in a limited way, while two others represent tosculi teamwork feats – which are okay, but a bit weak. On the other hand, the final feat, which allows you to make powders and splash weapons work as lines instead via Wing Fans is downright brilliant. The pdf also provides a 4-feat Style-feat-chain focusing on grappling and damage-output via natural weapons for a solid option array.

Regarding magical weapons and items, we get wasp-swarm bombs, a rod for hivemind-like attunement of participating characters. Salves that enhance defensive capabilities or a dazzling blade as well as a cool living spellbook are found herein as well and a fully stated old tosculi transmuter at CR 9.

Jeff Lee and Ben McFarland’s Tosculi are perhaps the most streamlined race in the whole series: Perfectly balanced, there is nothing I can complain about…oh, and then there’s the explicit note about fine-tuning balance, the great fluff and several pieces of intriguing, thematically fitting crunch that supplements the book rather well. This is pretty much a fun, awesome little racial book; A truly refined, well-written installment, a great little racial book and well worth 5 stars.