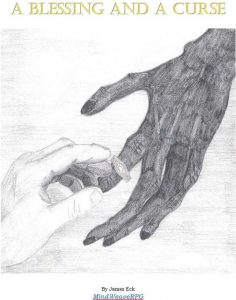 This little pdf clocks in at 5 pages, 1 page front cover, leaving us with 4 pages of content, so let’s take a look!

The concept of this pdf is simple: Players want goodies, and yet, items, nay, magic, should have a price to pay for it. The system proposed herein is simple – you roll 1d20 three times and check the table: Column one features 20 benefits, column two 20 drawbacks, and column three presents removal conditions.

To give you examples, among the benefits, we have “Protection from Evil – The wearer is protected from the effects of evil.”, but also e.g. “Time Slowing – The wearer perceives things as happening more slowly, allowing him more time to react and make decisions. The wearer may or may not have increased speed to match the change in time perception.” Or what about passing through walls and floors at will? In short, the benefits are classics, and some of these are interesting, whereas others boil down to spell-in-a-can effects.

The detriments are more interesting for the most part; evil being attracted to the user as one less intriguing example. But paralyzed limbs, uncontrollable squawking, the requirement to crawl on all fours? There are several rather nice ones here, once again often, but not always, being relatively easy to translate to most D&D-adjacent games.

The most interesting of the three columns, though, would e the removal conditions – items that need to be taken off by fae, that only can be removed by full body immersion, that require being enclosed in mud to be taken off? These are genuinely awesome and creative, and indeed, constitute the main draw of this pdf as far as I’m concerned. The supplement also walks you through a couple of considerations before portraying 6 sample items – that illustrate this design philosophy: Spectral rings net both silence and invisibility, but the wearer can’t interact with the real world and must be defeated before it can be removed. The trespasser’s mask lets you pass through walls, but prevents you from breathing AND requires that you return to the place where you were when you put it on to take it off. There are several such unique items here, and I very much enjoy the philosophy at work here.

Editing and formatting are very good, I noticed no serious glitches, though it should be noted that the pdf uses bolding for item, drawback, removal means and benefits of the items. Layout adheres to a no-frills two-column b/w-standard, with yellowish-golden headers. The pdf has no bookmarks, but needs none at this length.

James Eck’s little pdf started off weak for me – the benefits, in many ways, felt too conservative for me, courtesy of being system neutral. In a way, this is easily adapted, sure, but chances are good that the benefits already exist in your system of choice. To a degree, this extends to the drawbacks as well – this really shouldn’t have been system neutral as presented. The standard entries are boring, and the creative ones? They’d require serious rules-fu to convert to your game.

That being said, the system also presents the cool removal conditions, which generally tend to work super-well and enhance roleplaying. They highlight what benefits and drawbacks should have focused on as well – specific, roleplaying conductive tricks that feel distinct and magical. It also mirrors in many ways how I, as a person, like my magic items to behave and work.

That being said, the pdf could also have used a higher price point and more meat on its bones – as presented, it can best be thought of as a kind of design philosophy guideline for magic items – it’s a good one, but the system neutral nature, paired with the pretty conservative sample effects, ultimately render this less compelling than it could have easily been. However, the low and fair asking price of $0.99? Totally worth it. My final verdict will clock in at 3.5 stars, as befitting of a mixed bag, slightly on the positive side. I’ll round up due to in dubio pro reo.

You can get this little pdf for less than a buck here on OBS!

Enjoying my reviews? Please consider showing your support by leaving a donation or joining my patreon.