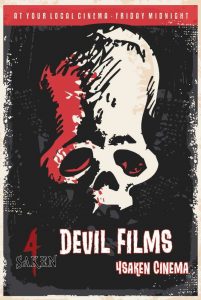 The first expansion for Purple Duck Games‘ neat 4Saken-horror-game clocks in at 42 pages, 1 page front cover, 1 page editorial/ToC, ¾ page blank, leaving us with an impressive 39 ¼ pages of content. It should be noted that the pages are laid out for digest-size (6’’ by 9’’/A5), allowing you to fit up to 4 pages on a given sheet of paper.

All right, so this is the first (of hopefully many!) expansions for the 4Saken horror-game and it focuses, surprise, on the ideas and rules required to depict plots of satanic possession in the context of the game. Now, unlike many other supplements for various RPGs, the focus of this supplement is not on depicting the influence of untold legions of fiends of varying dispositions – instead, we’re focusing on THE Devil. The singular force of evil.

As such, we first take a look at means to classify these tales in 3 different categories, all of which come with helpful classics, should you find yourself requiring some inspiration. The categories are 1) Possession/Exorcism, 2) Devil Spawn and 3) Summoning. After discussing these sub-genres and their general structure, we move on to take a look at the backgrounds and instincts most suitable for the genre of devil-based movies: Very good choices, okay ones and not so great ones: Particularly Bargainer and Monster should be avoided, though we make up for this by getting new backgrounds: These include Cop (+5 Fortitude and Awareness after spending Trait points, can go above 19, and gains basic Ranged Combat and Vehicles as well as +2 Contact picks), Priest (+10 Trait points for mental attributes, can raise them beyond 19, +2 contact picks, gain Clerical Respect – he can defuse volatile social situations), Reporters (+5 Awareness after Trait points are spent, can go over 19, gain Artistry (Writing) and Investigation, Perception or Streetwise on basic level for free and gains Favors; may spend 5 Luck to treat an NPC as a Contact once), Theurgist (+10 Willpower after spending Trait points, can go above 19, gains Lore (Occult) specialty for free, +1RS with ritual magic/powers). All in all, a cool, fitting selection, though e.g. Trait points are inconsistent in their formatting.

We also get new instincts: Experiencer, Desperate, Despodent and Observer – all come with their own bonuses and penalties, with often interesting uses of the table for the orange and red results. Gifts should be limited to mundane ones to keep paranormal or psychic gifts from changing the intended mood. After this, we take a look on the rules governing the respective stages of the script: The director gains extensive guidance regarding the three stages of possession, and how to depict them – from slow and steady ramping up of the creepy to a quicker, more action-focused progression, the considerations depicted here are nice. Rules-wise, the Devil establishes his Menace Factor by channeling infernal energy through the possessed: Each incident costs Infernal Energy while attempting to reduce the victim’s Willpower – the lesser the Willpower, the more the possession progresses. The Devil starts at a whopping 50 Infernal Energy and limits are imposed: The devil can’t just attempt to whittle down the Willpower of the victim as fast as possible: Just one check per day, which is btw. resolved as a Fear check versus Instincts, with Infernal Points spent as Menace Factor – success not only triggers the instinct, but also lowers the target’s Willpower…

Attacks similarly cost Infernal Power…and know what’s interesting? This system means that the Devil becomes more likely to succeed later, but also constantly makes the Devil more vulnerably. This is an interesting trick, rules-wise. Extra effects that trigger fear, but are NOT part of the base attack, do not count for the purposes of Willpower reduction, btw. – this adds another interesting strategy to the proceedings. Obsession effects are qualified and quantified next, with effects organized by stage and each effect sporting the respective costs in Infernal Power: We have apportation, cold spots, ghost sounds, obfuscation, unnerved animals in the Obsession stage. In the Oppression stage, we get infernal visage, inflict slashes, rabid animals, tech failure, violent apport. Finally, in the subjugation stage, we have infernal storms, speaking in tongues, unnatural movement. All in all, this presents all the classic tools a director could ask for, though I do wish we’ll get a couple of more specialized uses of Infernal Power at one point.

With ritual magic being a central component of the genre, we take a look at the structure of it next: Rituals require Expenses, time, intensity (the color the caster needs to meet with intelligence on the Master table) and Costs – these represent the cost to the caster’s Willpower, Luck, Life or Fortitude. From mesmerism to abjure evil, to summoning hellbeasts, we get a couple of examples for the relatively easy to grasp system.

Exorcism works pretty much like an inverted possession – only one attempt per day, and the ritual takes longer, the further it has progressed – the Intensity obviously increases as well. The ritual requires serious cost in Willpower, which means that yes, you will probably need multiple characters joining forces. Beyond the frightening nature, exorcisms also require Exhaustion rolls. Relics and true names can provide an edge for the exorcists. After we have codified the mechanics of exorcism in a tight manner, we take a look at the forces of hell next.

In this chapter, we mention the marauders and gain stats for devilspawn (Stats for childhood and puberty included!), infernal animals, summoners and tempters – all the cool basic things you’d expect.

The pdf ends with the basic outline of 3 story seeds, which may be connected to form a cool trilogy – and in case you’re wondering, they do include strange…things found and focus on three connected, but radically different set-ups. No, I am not going to SPOIL these here!

Editing and formatting are very good on both a formal and rules-language level – I noticed a few minor formatting inconsistencies, but these are few and far in between and did not impede my ability to grasp this book’s content. Layout adheres to a printer-friendly 1-column standard and the pdf sports a couple of really nice, original pieces of full-color artworks. The pdf comes fully bookmarked for your convenience.

Don Walsh and Brett Neufeld provide a really cool expansion for 4Saken: The mechanics employed for devilish possession can obviously be expanded beyond the confines of the genre; the backgrounds and instincts work well in conjunction with those presented by the core game book. There is a lot of guidance for the director, a lot of cool material crammed into these pages – more than I expected.

In short: If you’re enjoying the 4Saken-game, then this pretty much represents a must-own offering. Beyond the aforementioned minor hiccups, there is not much to complain about. Now personally, I would have enjoyed to see more of the outlier abilities and some suggestions for tweaking the strength of the Devil – to e.g. represent lesser demons, other demons, dark gods, etc. But then again, that’s not really a fair complaint, considering the focus of the book on the infernal big, bad guy. As such, I will round up from my final verdict of 4.5 stars.

You can get this neat expansion here on OBS!

Want to try out the 4Saken game? It can be found here!