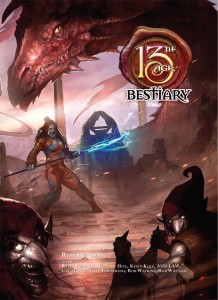 This massive book clocks in at 240 pages. I have received the color hardcover version of this book for the purpose of providing an unbiased, critical review.

A task that has been harder than I thought at first. Why? Because it’s a “first bestiary/monster manual”-type of book. I mean, come on, how many ways can you say: “This book contains orcs, ogres, etc.” To me, as a reviewer, there is NOTHING more boring than the first bestiary, ESPECIALLY since the advent of 3.X.

Let me ramble for a second: When I began playing, bestiaries were actually that – they were fashioned after the medieval catalogues of fantastic creatures and thus provides stats, yes, but more importantly, they provided information on society, habitat, tactics. Flair. Things that set my mind ablaze with ideas. Then 3.X hit and as much as I like the mechanical complexity and wealth of options PFRPG et al. provide, as much do I loathe what this has done to monsters. Instead of receiving a fully-fleshed out creature with a place in the world, a modus operandi etc., we get some dry numbers, two lines of fluff and that’s it.

In 3.X and its inheritors, monsters felt like machines, less like living, breathing creatures to me. Pathfinder has inherited this issue, though thankfully, a broad array of templates and unique signature abilities has somewhat mitigated the process of making monsters just HP-exchange units. Now granted, I can very much appreciate (and continue to do so!) well-crafted creature-mechanics, but I still catch myself wishing for a simpler time once in a while – or for a time when monsters still had story, still had a place.

What does this have to do with 13th Age? Well, in my original review of the core book, I called 13th Age somewhat schizoid in some design-decisions. In none is that more apparent than in the stance on monsters. Personally, I HATE the fixed damage-values monsters usually deal in 13th Age. However, the nastier specials, which provide upgrade-abilities for harder games or to showcase elite adversaries, are downright inspired. While the core book’s monsters have fallen into the blander than bland routine for the most part, with no significant lore-upgrade to their roles, 13 True Ways provided pretty much a personal El Dorado for me – a vast array of utterly unique backgrounds for devilkind to choose from, each more inspiring than the last? Yes, please! Gimme more!

Feel free to correct me if I’m wrong, but I very much assume that you are not that interested in my rambling on and on about 13th Age’s ogres versus that of other d20-based games or this book’s version of a critter or absence/presence herein. What I do assume you to be interested in is quite frankly the consequence of monster-design for 13th Age being ridiculously easy and streamlined – namely, whether to buy this book or not. After all, it is a first bestiary – not too much uniqueness in here, right? I know I wouldn’t have purchased this book based on its premise alone.

Well, you would be right on one hand – and, like me, dead wrong.

The first thing I feel obliged to mention is that each monster-entry herein not only comes with one simple statblock – instead, the respective beasts come with multiple ones, providing upgrades and often, utterly unique abilities beyond the what the base creature has to offer – if you’re coming from a pathfinder bakcground, think of it as the difference between a regular critter and its mythic counterpart; if you’re coming from an old-school gaming background, think of it as the difference between a skeleton and a skeletal champion. Yes, this pronounced.

Furthermore, the respective creatures actually get their place to shine – where PFRPG’s bestiaries are not read for inspiration (that’s something I draw from the creature-themed campaign supplements), this book does provide that in spades. With nomenclature where applicable, advice for building battles, in-character quotes, relationships with icons and yes, copious adventure hooks, this bestiary delivers in spades. Want an example? Well, take the chimera – these creatures actually come with a built-in template for each of the iconics, all providing different bonuses and flaws that serve tor ender the creature distinct for each iconic – oh, and yes, these are based on the PC’s relationships with their iconics. What about symbiote magical items made from chuul? (Who needs Ankheg armor, anyways?)

Different approaches and philosophies within certain races and odd quirks that are downright inspired can be found in almost every entry – for example, did you know that couatl consider themselves to be the true heroes of the world? Were you aware that ettercaps make excellent info-brokers? What about the myriad creatures that make up the fungal kingdom, including a race potentially suitable to be played? Why should cubes have all the fun – unleash gelatinous dodecahedrons upon your PCs – and roll an appropriate die to see what the creature does instinctively! Whichever lore you prefer regarding ghoul bites, you’re covered and inspiration for outbreak-scenarios can be found in the respective entry.

Of course, some creatures receive brand new takes – at the court of the lich king, for example, being a lich may just show that you’re another sycophantic poser and manticore bards immediately conjured up scenes of Groteschi the Red, one of the more unique creatures from Catherynne M. Valente’s Orphan’s Tales. Now note that from the Crusader’s Saved (which may be a fate worse than damnation) to the clockwork Zorigami that may constitute the heart of the world and the sentient countdown for the end of the age or even the world, there are quite a few unique creatures in here as well.

Why should you care, even if you’re not playing 13th Age? Well, if the huge wealth of exceedingly glorious fluff, hooks and ideas is not enough to sway you, what about sheer design-ingenuity?

What? Yes. 13th Age does not lend itself well to making interesting adversaries that have thousands of combos and options at their beck and call. However, in the case of this book, this limitation proved to be a blessing in disguise. From modifications of escalation or relationship dice to truly unique options, some of the abilities herein are, no hyperbole, GENIUS. Take the redcap. Tried and true delightfully evil fey – we all know and love the iron-shodded menaces. Well, herein, they have taboo-words – even if you *think* them, they get power from it and may teleport et al., gaining potentially a nasty array of additional actions. Now how is this represented? When a PLAYER says the taboo word, the ability kicks in. Yes. This is pretty much brilliant and can provide quite a mind-blowing experience when handled with care. This is just ONE example out of a bunch of them. This book’s abilities OOZE creativity and will enrich ANY d20-based game I run for years to come.

Editing and formatting are top-notch, I noticed no significant issues. Layout adheres to a nice 2-column full-color standard and the book sports a lot of unique artworks for the critters, which adheres to a uniform style and can be generally considered to be situated in the upper echelon of quality, though not yet at the top. My hardbound copy is sturdy, pretty to look and easy to use, with nice, glossy, thick paper.

Rob Heinsoo, Ryven Cedrylle, Kenneth Hite, Kevin Kulp, Ash Law, Cal Moore, Steve Townshend, Rob Watkins, Rob Wieland – congratulations. You have actually managed to craft the first “Bestiary I” since the days of second edition I liked to *read*, the first that inspired me. This book manages what neither monster manuals of 3rd or 4th edition or PFRPG’s bestiary-line has succeeded in doing – actually inspire me to use creatures, to craft adventures around them, to use them to make the world feel more alive. While a rare few 3pp bestiaries over the years manage this sense of wonder, it usually stems from clever mechanics or uncommon concepts, only rarely from actual narrative potential. Ultimately, this book, in spite of its “1st bestiary”-handicap, did all of that and more and makes me giddy with anticipation and hopeful we’ll see more far-out creatures in the level of detail as provided herein.

The 13th Age Bestiary is a superb, inspiring book, which may not be on an artistic or aesthetic level with the big ones, but is infinitely more inspiring – and for me, I’ll take content over bling any day. My final verdict will clock in at a well-deserved 5 stars + seal of approval.

You can get this awesome tome (which also works as a great scavenging ground for designers stumped on ideas) here on OBS!
Endzeitgeist out.