Purple Mountain I: Temple of the Locust Lord (DCC)

Purple Mountain I: Temple of the Locust Lord (DCC) 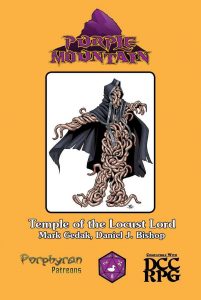 This conversion of the first installment of Purple Duck’s Purple Mountain dungeon is 33 pages long, 1 page front cover, 1 page editorial/patreons-thank you, 2 pages SRD, leaving 29 pages of content for the first level of the dungeon. It should be noted that, like most of the recent Purple Duck games-supplements, the pdf is formatted for digest-booklet size, A5 or about 6’’ by 9’’, which means that, if you print this out, you should be able to fit up to 4 pages on a sheet of paper,

Okay, while Purple Mountain is a mega-dungeon, rest assured that you don’t need to commit to the entirety of the series – this module (and its follow-ups) very much works as a stand-alone adventure and the pdf even provides some guidance for use as both stand-alone module or as part of a mega-dungeon.

Which brings me to another issue that DCC judges will undoubtedly want to have answered: Does this “get” DCC? After all, the system has some seriously different paradigms when compared to both PFRPG and 5e and this module, originally, was published for PFRPG. Let me get that out of the way from the get-go: Yes. For example, the eponymous locust lord, at best something to oppose in PFRPG, has become a patron in this conversion, complete with invoke patron table. (But no unique spellburn or patron taint options, alas.)

Similarly, the PFRPG-version did sport the iconic wayfinder as one object featured – and since DCC has a different aesthetic paradigm when it comes to handing out magic items, it has been purged…but at the same time, if you *did* actually want the item, you can still find it – fully converted to DCC in the appendices! That’s going the extra mile – big kudos. If you’re like me and have been an ardent follower of PDG’s excellent DCC-offerings, you’ll know the map of the module. It has been used before in the excellent Through the Cotillion of Hours – which, as an aside, was for me one of the moments where DCC-system’s unique aesthetics were perfectly captured.

Structurally, the module is easy to run, to say the least – not only does it sport notes on general dungeon properties like doors, illumination-levels etc., but also notes exits, etc. Similarly, when the pacing begins to lag, you may draw on one of several specific random encounters, which, unsurprisingly, include a variety of magical creepy-crawlies and insectoid threats. Beyond these specific ones, general random encounters can also be found.

That being said, the following review contains SPOILERS, potential players might want to jump to the conclusion.

The temple of the locust lord is actually the fortress of manamites under the command of dread Iraksed, once a man, now a collection of squirming worms under his robe. The manamites depicted herein are not simply mites with a prefix latched on – scorpion-riding mini-knights and the plentiful insectoid threats should provide plenty of chances for uppity PCs to perish. The unique form of Iraksed also makes him, just fyi., a perfect recurring villain – he can reform from a single escaped worm…ouch! The horde of vermin under the command of the manamites and their dread master are not limited to oversized versions of common insects or ones with a bit of supernatural flair – the throach, a dread combination of scorpion and cockroach (full-color artwork provided!), which is just as mean-tempered as it is ugly, represents one deadly adversary…and a demon is stalking the halls as well…

But intrepid adventurers can also find some goodies here – provided they are smart and thorough: You never know what a tank of mealworms may hide…. Have I mentioned the magical pools, which may, for weal or woe, change the fortune of the PCs? (Oh, and greedy PCs may find out that giant amoebas can look deceptively like such pools…) Beyond these, it should be noted that the PCs better should have means to deal with traps. And they should keep their eyes peeled. There is one particularly obvious, but dastardly trap – a massive garbage disposal/grinder…which, unfortunately, for the PCs if you’re planning on using this as a mega-dungeon, also constitutes the only way further down…talk about going into the grinder…

Editing and formatting are good, I only noticed some very minor glitches, like a “two” that should be a “to” and the like. Layout adheres to a printer-friendly one-column standard with purple highlights. The full-color artworks deserve special note: The pdf sports multiple really nice interior artworks of the monsters by Matt Morrow. (Cover artist is Jacob Blackmon.) The pdf comes with excessive, nested bookmarks and is really easy to navigate. The cartography does its job, but I was a bit bummed that we don’t get a player-friendly, key-less version of it – in an age where many folks play VTTs (and reviewers like yours truly suck at drawing maps), I would have really appreciated having one.

Mark Gedak did not simply have his module converted to DCC. It’s not that easy. Okay, it could be that easy, but you wouldn’t do DCC justice. Instead of converting just the mechanics and slapping a new label on the module, Daniel J. Bishop has gone above and beyond in his conversion efforts. This is, in short, a very well-made translation of the module; to the point where I actually consider it to be superior to its PFRPG-iteration: It feels more dangerous, rawer and more primordial and the challenges herein should test the mettle of adventurers in a fun way. All in all, not much to complain about, apart from the lack of a player’s map and wanting a bit more on the patron. Still, if this is what we can expect from the series, then color me stoked. My final verdict will clock in at 4.5 stars, rounded up by a tiny margin for going the extra mile in the conversion.