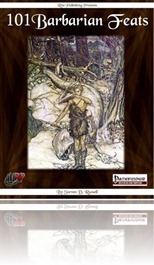 Of all the core-classes, none has been as neglected as the barbarian – Wizards enjoy new (sub-)schools, sorcerers a lot of bloodlines, all the divine classes get a vast amount of new spells and what did the barbarians get? Nothing! Rite Publishing finally sets out to remedy this gross oversight and provide us with a vast selection of new feats geared specifically towards being useful for barbarians. After a comprehensive list of all the feats and what they do, we are introduced to them and boy, they are of the high quality I’ve come to expect of Rite Publishing.

Mechanically, this pdf contains a lot of feats and many of them also have the (combat)-subtype, that is fighters and gunslingers get something out of this file as well! That being said, emphasis definitely rests on barbarians and the flavour they feature oozes primal rage. As with the last 101-feat book, these feats all come with a short line of fluff. Many of the feats herein could also be selected as a rage power and use PFRPG’s new rage-point mechanic: Many a feat can be used by spending a couple of rage points to do some extraordinary displays of strength, resiliency and savagery and devastating attacks.

Several of the feats can also be considered background feats – there are feats for ex-slaves, who channel their pain into their strikes, man-hating amazons, notorious and shamed exiles etc. There are other feats in here, too: A whole slew of the feats enables you to channel your rage towards more benign purposes and guard designated family members, women etc. These feats of morality offer severe present a kind of codex for barbarians and harming a designated target might elicit sever repercussions – never harm a barbarian’s child, unless you’re prepared to suffer a devastating blast of rage…

Among my favourite of the feats herein is a mini feat-tree that is essentially a whole family of feats packed into 3: The demonic rage tree – essentially, the rage of these barbarians stems from demons that have been harmlessly bound. When entering a rage, the barbarian displays some of his demon’s powers and quite a bunch of them are covered. From a balor’s senses to a succubus’ wiles – the options are iconic and cool.

Speaking of the latter: Have you ever been bugged by the fact that Conan got all the girls, but his Charisma was probably not that high? Well, herein are also feats that enable a barbarian to se his hardiness and strength to look appealing, enabling the concept of a barbarian leader.

And then there are the “Stark, raving mad”-feats – dirty and insane fighting techniques that should turn the stomachs of cavaliers – from insane, killing spree-like rages, the ability to blind foes with spittle and omit up acidic juices, the options to create slavering madmen is included, should you be so inclined.

It should also be noted that classics like the ability to spread one’s rage to others, deliver minor curses etc. are covered as well. And then there are feats like “Rage against the Machine”, which I know one of my players would immediately take without even reading the text. (Guess what – good against constructs!) Better yet, if you ever wanted to use your throwing axes/daggers for cover-fire, there’s a feat in here for that as well.

Another thing you might associate with barbarians (I know I do), is resiliency and finally, there’s a feat that lets you step into the footsteps of the great heroes of the Sword & Sorcery-genre – the invulnerability-feats. The mightiest of them, Greater Invulnerability, lets you expend 3 rage rounds once per day to ignore one melee or ranged attack and its effects. Thulsa Doom’s death grip? Pfff! That dragon about to chomp you to itty bitty pieces and swallow you whole? You’re standing in his mouth, holding his jaws ajar! By far the most powerful feat (at least in my opinion) in the whole book, I at first considered this overpowered, but the once-per-day restriction along its steep round-cost makes this a truly cinematic choice. In fact, several feats herein might actually make the barbarian a valid choice for being the party tank!

Editing and formatting are the only disciplines in which this pdf does not particularly excel in – while by no means bad, I noticed some asterisks, minor errors and in the spitting feat, no formula is given for the fortitude save against blindness. Layout adheres to RiP’s 2-column standard, the artwork is stock and the pdf comes fully bookmarked. “What can I do, what can I say – choose your weapon, time to pay!” could be the tagline for this book – barbarians, often neglected, finally get their very own toolbox of deadly powers, several of which might actually be the focus of whole campaigns and could come with specific in-game reasons for adventuring. In fact, just reading these feats gave me a vast amount of ideas on how/where to use them, for which kind of character and even made a murder-mystery plot form itself in my mind – there’s a hulk-style (sans green) feat that lets you grow and who would suspect that halfling sitting at the bar of being this huge brute that thrashed the townsguard two nights ago? Idea-wise, this pdf is golden – it expands rage-powers via feats, offers great customization-options and provides A LOT of fodder for everyone with even the slightest hint of a savage streak out there. In fact, if you’re playing Skull & Shackles, you’ll be happy to know that raiding barbarians and corresponding feats are covered in these pages as well! That being said, I’m a bit bummed by the editing glitches, for without them, this would be a straight 5-star file. With them, though, I can only settle for a final verdict of 4 stars and a definite recommendation for everyone who wants to see their enemies driven before them – after all, “What is best in life?”

101 Barbarian Feats is available from: