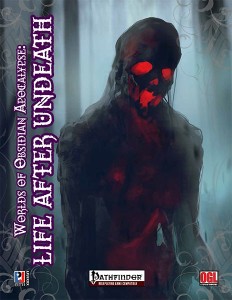 This expansion to LPJr Design’s glorious apocalypse-toolbox clocks in at 25 pages, 1 page front cover, 1 page SRD, 2 pages of advertisement, leaving 21 pages. Of these, one is a buff-sheet, 2 are devoted to a character-sheet, 1 to a combat/initiative tracker sheet and 1 to micro-monster-sheets, leaving us with 16 pages of content, so let’s take a look!

We begin, as in the core-book for these apocalypses, with a very brief timeline of destruction in the last 100 years, explaining how things gradually became worse and worse – this time around, the very veil separating life from death has thinned – dangerously so. Sounds familiar? Well, this is essentially Obsidian Apocalypse’s Ghostwalk. So how does this work?

When a character dies, he rolls 1d20 + level. If the result is 25+. the character becomes riven, rejecting the threshold of death. Riven change their type to undead (augmented humanoid), do not age, radiate an aura appropriate for the alignment, gain the unnatural aura ability and, they lose their constitution score, instead using Cha for fort-saves, special abilities etc. They thus also become immune to fort-save prompting saves unless they also affect objects. They are destroyed when reaching 0 HP and can heal damage on their own. Riven do not eat, drink, sleep or breathe and cannot reproduce or have sexual desires.

Now pretty interesting, the riven may progress in a kind of 10-level racial paragon class, with d8, 3/4 BAB-progression, good will-saves and they progress darkvision and continue to receive the numerous missing immunities the undead usually receive – in the first 3 levels. They also receive scaling channel resistance and natural armor. They also receive undead-themed spell-like abilities – alas, without specifying the CL – I assume = character level, but I’m not sure. Extremely interesting, the rive also receive a pain pool – the points in this pool can be used to heal creatures…I assume. Why? Because the Transfer Pain ability is terribly opaque. “First, as a standard action, the riven can touch an injured creature to heal it, adding points to his pain pool equal to the damage healed.” – so, does this mean the riven takes the HP as damage? This, alas, is not specified. The Riven may then inflict damage equal to any number of points in the pain pool by executing a touch attack. The points last for cha-mod rounds, but have no caveat for expiring. So, what this effectively means is: INFINITE HEALING! For the whole party! BROKEN!!! URGH. This alone would be enough to disqualify the class in my games, but add the copious immunities at low levels and the lame high level abilities and we have a thoroughly unbalanced class that would have benefited from tighter control, a smoother dispersal of immunities… etc.

The second racial paragon class, the sundered, has one thing in common with the riven – it does not mention class skills per level or a list thereof. The Sundered are also undead, much like the riven, but they also receive the ethereal creature special ability. Note that they thus become immaterial and invisible. Permanently. It should be noted that such creatures, unless they utilize special tricks, cannot influence the material plane. This requires the sundered 10-level racial paragon-class, for example. Sundered can manifest character level times/day and maintain this for cha-mod rounds and the sundered remains incorporeal when manifested. At 10th level, sundered may manifest as physical creatures. The racial paragon-class receives d8, good will-saves, 3/4 BAB-progression. Alas, the immunities of these spirits utilize a similar, even more front-heavy ability progression, meaning that yes, I still consider this pretty broken. Now worse – ethereal as a constant ability means that the sundered, as depicted, will sit around, unable to interact with most material plane creatures, NPCs etc. – it’s the spectator-race! Note that etherealness specifically is defined as being only influenced by force effects and abjurations originating on the prime material plane, BUT NOT vice versa. Yeah. Unpleasant.

Cooler would be the idea that undead gaining a level may see their soul and body severed, allowing for some overlap between the two races – which would be rather elegant, but note that the instant-death clause of the save can provide excessive frustration for the PLAYERS – you level up, botch one roll and die? This is design-wise not a good idea. Why not tie this whole mechanic to another, more linear mechanic and instead tie it to gradual HP-degradation, for example?

The pdf goes on to provide advice for handling undead PCs and how certain classes have their class features modified and a short, but relatively uninspired spectral crusader paladin archetype can be found. Next up would be an array of different racial feats for undead, riven and sundered. Cloaking your undead nature is pretty cool and stealing an item, bringing it into the ethereal is cool – but why should I pay for that when it’s pretty much a necessary basic and required ability for the sundered? Extensions of the numerical abilities of the racial paragon class. Riven temporarily turning incorporeal, causing negative energy at touch, massive resistances to resist the severing – the feats generally are well-crafted, but a lot of them feel like they ought to have been included in the base race, instead of having the racial paragon classes spam undead immunities at low levels.

Magic item-wise, sundered wanting to use items will require a +2 new enchantment – which pretty much cripples their magic item arrays. We also receive 8 new specific magic items and, once again, they are pretty interesting, focused on dealing with the undead and spirits. A total of 4 very brief organization synopses can generally be considered neat, as can the 4 nice settlements.

The pdf closes with concise and generally, solid advice for DMs GMing the undead.

Editing and formatting are pretty good on a formal level, I can’t complain in that regard. Layout adheres to the gorgeous two-column full-color standard of Obsidian Apocalypse and the artwork is thematically-fitting, cool full-color stock. The pdf sports no bookmarks.

Rich Redman is a great designer, yes. And yes, I am pretty much a total fanboy of Obsidian Apocalypse and Ghostwalk. Alas, this pdf does not manage to really blend these well – Don’t get me wrong: I love the blending it does and the fluff, the idea to codify the undead immunities in the racial paragon class – I just wished the immunities and classes were more smooth in their ability-grants. I wished the sundered would actually work – the whole ethereal ability dooms the character to passivity for most of the time, which is just a bad decision. Why not eliminate immunities and go incorporeal instead? That would still be a unique playing experience and once you could easily balance. As written, the base races at the heart of this product have issues and that radiates outwards. However, it should be noted that the supplemental material herein is pretty much cool and inspired, but also flawed The pdf can be a neat scavenging ground, but alas, falls short of true excellence, with missing skills etc. No FCOs for the races, no alternate racial abilities – all of these show quite clearly the potential which is instead covered by feats, imposing an unnecessarily steep feat-tax. Balancing could have been much smoother here. Still, at the end, I can’t bring myself to dislike this book – it does have some cool ideas, unrefined though the crunch may be. My final verdict hence will clock in at 2.5 stars, rounded up by a margin.

You can get this flawed, but cool supplement here on OBS!