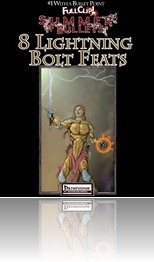 This pdf from Super Genius Games is 4 pages long, 1 page front cover, 1 page SRD/editorial, leaving 2 pages of content for 8 spells that modify the classic lightning bolt spell, so let’s check these feats out!

Editing and formatting are top-notch, I didn’t notice any glitches. Layout adheres to SGG’s 3-column standard and the pdf has no bookmarks, but needs none at this length. I’ll make it short – this is once again a winner among the spell-changing Bullet Points that offers a supremely versatile array of cool options that offer both cool options and iconic imagery. My final verdict will thus be 5 stars + endzeitgeist seal of approval.

With a Bullet Point: 8 Lightning Bolt Feats is available from: