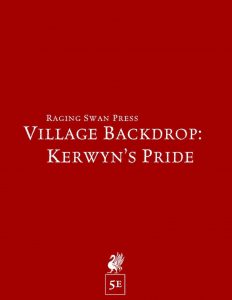 When infamous pirate captain Vayla Hollan (fully presented in the fluff-centric style of the series; one of two NPCs getting this treatment) met her match in a particularly nasty storm, she barely managed to steer her vessel, the eponymous “Kerwyn’s Pride”, into the relatively safe Ballisco Bay. Here, she found opportunity – three baronies vying for supremacy and control over the water-based trade routes. Instead of simply making her ship seaworthy once more, she went a different route – ships were converted into buildings, wood was salvaged from the wrecks, and from the wrath of a storm and an enterprising mind grew a floating village, bastion against storms and pirates alike – and, of course, also a haven/monopoly of sorts for illicit activities at the same time – a tiger can’t change its stripes, after all!

Kerwyn’s Pride, thus, is not a safe place – after all, it is still a settlement of semi-legitimate pirates! As always, we have notes on local nomenclature and dressing habits, as well as information on local rumors. No marketplace section is provided in the 5e-iteration. As a transitional place, the village sees pretty vast amounts of wealth transit through it; law and order (haha) and the local customs are explained, and the supplement does include a list of 20 dressing entries and/or events; these can be sued to jumpstart the action.

The surrounding land and waters are explained, and the respective keyed locations provide the relevant information – the Inn notes prices for food and drink and accommodations, and both Inn and holding pen sports their own 6-entry specialized event-tables to further add to the game. All of the keyed locales come with well-written read-aloud text describing them, and even better – quite a few of them have adventure hooks added. In one instance, the nasty, insect-ridden bog has even a properly statted disease, providing some pretty nice hazard information – and yes, this has properly been adjusted to 5e’s rules! Minor nitpick: There is a repel vermin reference here, and I think there is no 5e-version of that spell. It’*s self-explanatory in effect, though, and doesn’t hamper functionality of the material unduly, though. These mechanical bits also extend to e.g. a fully realized trap, where applicable – and these components, or so I found, really add to the convenience of the supplement; the fact that they have been properly adjusted to 5e is a nice plus.

Mike Welham delivers here – this place, potentially kinda-mobile, can make for a newcomer to a region; it could be used as a smuggler’s haven, a pirate-hunter’s fortress, etc. – and it does not overexplain its angles. It offers potential, but what you do with the place and the narrative angles provided? That remains fully up to you! In short, this is a great example of a unique little supplement that provides a great time. While the snafu regarding the spell reference was avoidable, it doesn’t hamper the functionality of the supplement; as such, this version also is well worth 5 stars + seal of approval.

You can get this awesome little pdf here on OBS!

If you enjoy my work, I’d appreciate a direct donation or joining my patreon. Thank you.