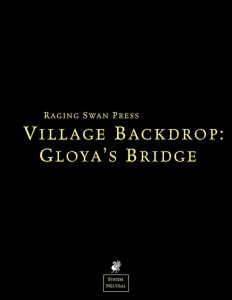 Sometimes, tragedy breeds redemption. When architect Gloya Azacral’s neglect got her fellow dwarves killed, she went into exile, to the sleepy hamlet at the ford of the Telnus Creek, erecting the eponymous bridge, and founding the Merciful Order of the Mask as an organization to maintain the bridge AND rehabilitate criminals in a surprisingly enlightened and productive bid for redemption. The success of the operation has made the village prosper and grow, with the culture emphasizing privacy. This, and the means for criminals to make amends have fostered a reputation of being dangerous, which is not entirely just. Many villagers may have dark pasts, but the village’s ban on bounty hunting provides at least a modicum of security, a chance to start anew. Of course, there are people seeking to coerce those that are here, and not all bounty hunters respect the village’s rules, so the baseline does indeed feature some serious adventuring potential.

The PCs, provided they do their legwork, can unearth much of these facts via the by now classic village lore and whisper and rumor section, and with masks a central part of the dressing habits here, the bridge is indeed a unique place; this is, obviously, also underscored by appearances and nomenclature employed here. As mentioned earlier, redemption and the nature of the bridge pretty much explain sources of income and industry, with the Merciful Order acting as law enforcement. Murder, etc. is btw. not tolerated, with those botching their chances here facing exile and having their names spread far and wide. The settlement is made more organic via the inclusion of a 20-entry strong table of dressing and events, and in one of the better cross-referencing instances of the series, we have ties to the Raveneye Sanatorium as well as to Lanthorn, with bounties on monsters enough to occupy bounty hunter PCs in absence of human(oid) prey.

5 sample NPCs come with the usual fluff-centric write up featuring their mannerisms, personalities and background (the latter is particularly relevant this time around, obviously). Bridge toll etc. is noted, and, as most of the time, we get 8 keyed locales, all with read-aloud text ready to go. The supplement excels in one crucial way: In by how exceedingly “gameable” it is.  Not only do we get “What’s going on” hooks to further enhance the notion of a dynamic environment, the whole theme of redemption is used to great effect, with plenty of locations noting quest hooks, bounties on people and the like – and much to my pleasant surprise, these are not the only roleplaying angles provided.

In the system-neutral iteration, the village makes proper use of the old-school nomenclature, and instead of a marketplace section, we have magic items for sale noted in the locations where they’re relevant. These are properly priced for old-school games, fyi – i.e. they are EXPENSIVE.

David N. Ross is one of the few authors who not only does crunch-design really well, he equally excels with fluff/lore-centric supplements, such as this one. Gloya’s Bridge is awesome. It is a place that can depict plentiful tragedies, and allow you to explore stories of revenge, redemption, and the like. It basically demands being used, and weds these concepts with a unique aesthetic. I love it, and in this iteration, I have no complaints regarding missed chances or other nitpicks – 5 stars + seal of approval.

You can get this evocative, cool village here on OBS!

If you’re enjoying my reviews, consider leaving a donation, or joining my patreon!