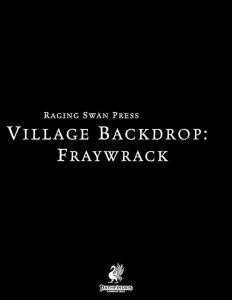 Formally, the supplement has been expanded in the usual way for these second visits to locales: That means, we get more extensive information regarding the surrounding locality, and the very helpful notes for the GM on life in the settlement, local laws and customs and tradition all are here. The super helpful dressing/event table has been expanded from an original 6 entries to 20, making it much easier to portray the place as an alive and organic environment. Unlike most of the supplements in the series, this has not received read-aloud text for the keyed locales. The revised version also introduces a new keyed location, which is per se nice, but carries with it a whole new problem: The map isn’t correct anymore. The keyed location number 11 is missing, and e.g. a wreck is erroneously referred to as “chapel”, since the new location is #7 – all keyed locales #7 and upwards are thus incorrect– that’s a pretty big blunder that severely compromises the utility of the pdf.

It is btw. nice to see that the pdf does come with a nice marketplace section for consumables, magic, etc., featured among the keyed locales. The location sports also a ramshackle settlement, as you can imagine – and honestly, I could elaborate on how the individual locations are cool and evocative, but frankly, that would be redundant as far as I’m concerned – the set-up at the grand scale is creative and full of potential, something that is continued seamlessly to the individual locales, generating a truly amazing location. Much to my chagrin, the revised edition has not seen fit to include some modifications or stats for the 4 new NPCs featured, which are depicted in Raging Swan Press’ usual, fluff-only manner. Getting some unique attacks or abilities for them would have been neat.

Mechanically, the pdf per se handles adjustment to PF2 well, but, as often, tighter integration into the (critical) success/failure mechanics would have been nice for the checks.

Jacob W. Michaels’ Fraywrack s creative, cool and unique – the idea is simple, but the execution is frankly inspired and chock-full with roleplaying potential. On the other hand, seeing the revision botch the map? That’s a pretty big no go. On the other hand, though, this is the first version for PF2, and as such, does have a value for PF2-purists. The writing is top-tier, but this map-issue seriously compromises the pdf for me. That being said, it’s the first time this is available for PF2, which is why my final verdict will be 3.5 stars, rounded up.

If you can, please consider leaving a donation, or joining my patreon. It keeps the lights on.