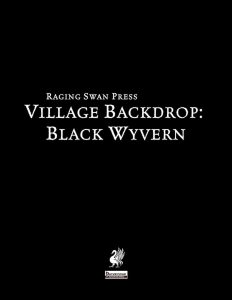 The settlement comes fully equipped with proper settlement statblock characteristics as well as a marketplace section of items to pursue. Nomenclature is similarly covered, though, oddly, mannerisms and dressing habits are nowhere to be found. On the plus-side, we receive village lore, the usual 6 whispers and rumors for hooks and red herrings as well as more precise details on the local population and sites of interest within the beautifully mapped village.

An extra section on local industry and law and order (or their relative lack of) complement the pdf alongside 6 sample events you can use to jumpstart proceedings if the PCs are idling. That being said, the final page is a one-page illustration of the dread tree…a great b/w-artwork, for sure…but personally, I would have loved the space to instead be used to provide actual unique stats for the evil treant-monstrosity lording over the place – just making it an NE treant feels…I don’t know…kinda lame?

Particularly considering the importance of this BBEG for the dynamics of the town, some crunch would have been warranted here. Come on: An animate hangman’s tree? Where are the animated carcasses? The flung corpses that spit forth thorny seeds? The body-snatcher plant-invasion angle? Where is the creepy cult iconography? The table of strange utterings à la “Death to you, life for your seed”, where is the Wickerman Summer Isle-style angle? There is another issue: One inhabitant has access to a paste, which, when smeared on the treant’s roots, can take away its abilities to animate trees. Okay, why don’t we get stats for that? Also, it is called a “poison” here – and guess what: Plants in PFRPG are RAW immune to poison. Worse, this implies the tree can’t move, which breaks completely the whole angle – just lob fire at it and be done with it.

Richard Green’s Black Wyvern has a more unique angle than his last pirate-y settlement, so that’s a definite plus. On the downside, this village is very straightforward in how it’ll work in play and doesn’t fully capitalize on the straightforward angle. If you depict a threat this explicit in how it’ll be used, why not make it shine and go all out? Slapping an evil alignment on a critter does not make for a compelling adversary on its own as far as I’m concerned and the pdf certainly has the space to further elaborate on the creature in question. As a whole, this feels like one of the weaker installments in the series and is slightly briefer as well. It lacks the stats for the unique gizmo for resolving the settlement’s storyline and its implications contradict rules. In short: In a series this beloved, that has so many amazing installments, it falls flat for me and is utterly uncharacteristic for the author.

My final verdict can’t go higher than 2.5 stars for this one…and I’m only rounding up because the angle, in spite of the logic issues, is too cool to deserve a 2-star-slap.

You can directly support Raging Swan Press here on the patreon!