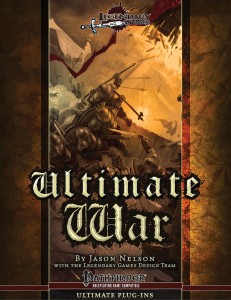 The third expansion of the kingdom building/mass combat rules presented in Ultimate Campaign, expanded by the very man who wrote the original rules, clocks in at 45 pages, 1 page front cover, 2 pages editorial, 1 page SRD, 1 page ToC, 2 pages on how-to-use/what to expect, 1 page advertisement and 1 page back cover, leaving us with 36 pages of content, so let’s take a look!

This supplement kick off by eliminating two of my most serious gripes with the base mass combat rules from Ultimate Campaign. Number one: Ultimate Campaign does not distinguish between ranged and melee capacity, instead subsuming both under the termino umbrellone of OM, Offense Modifier. This resulted potentially in ridiculous scenarios of elven archer beating orc berserkers in melee. Ultimate War gets rid of OM in favor of separate Melee Value and Ranged Values, abbreviated MV and RV. YES!!! Secondly, the hit points as an abstract measurement to determine an army’s deceased is replaced with casualties – which can be tracked individually/separately for sub-units etc., allowing much more detailed and finer tactical nuances. Best of all – both allow for easy downscaling back into Ultimate Campaign’s base system, if you prefer the simpler take.

Leadership Bonus of a commander is equal to +1 for every full 5 ranks in Profession (Soldier) and high BABs (+6, +11, +16), Wis or Cha modifiers, certain feats etc. can further increase this bonus. The rather rudimentary selection of command boons is also expanded by this supplement – and the boons are great – Battlefield illumination (or making light-conditions worse!), autosupplying itself, con/desecrate battlefields, divine healing or barrages, smoke screens or particular proficiency when deployed against aerial armies – glorious! Have I mentioned the awesome effects of war chants or the option to execute precise, less damaging assaults via surgical strikes? Brilliant!

Speaking of which – combined arms. Where the general army as a base unit type would be the catch-all default, the rules provided herein allow for a finer distinction. Via these rules, armies are made up of units, which in turn can be made up of several divisions. This is analogue to the distinctions between fleet->squadron->ships. The number of soldiers in a unit is the same as the one in the default rules’ army. Creating a unit follows, according to these rules, simple steps – you pay and gather them, you assign a commander (with PCs being particularly potent!) – which influences the amount of divisions in a unit a commander can handle – 3+ cha-mod, max 5 divisions can be contained and losing a division penalizes the unit. Each division can take casualties equal to its ACR before being defeated – this concludes that each unit has hit points equal to ACR times 5. Divisions reduced to 0 hp can be healed normally, but additional damage annihilates them. MV and RV are ACR+leadership bonus of the commander, provided the unit is properly equipped. If not all divisions are equipped to execute one type of attack, the overall value suffers – cool!

Morale score is the kingdom’s loyalty divided by 20, min 1, max 10 and determines all the psychological components. A default value and advice for using morale sans kingdom building (Kudos!!) can also be found here. Determining overland movement, scouting capacity, camouflage, name and home-base – in 12 easy steps, just about every DM should be able to create an army – on my first try, it took me less than 5 minutes to properly apply these rules and generate a unit – WITH double-checking that I got everything right.

Each army may contain a number of units equal to the general’s cha-mod+3, further increased by leadership, certain boons, etc. Battle Phases are influenced by the new distinctions between ranged and melee values – hence, a concise run-down of the phases is provided, thankfully including proper inclusion of not only the new casualties mechanic. It should also be noted that recruiting armies works perfectly in synergy with Ultimate Rulership as well as the base system. Applying simplified combats between aerial and naval ships etc. would also be discussed here. Now I’ve already mentioned aerial combat and indeed, aerial reconnaissance, altitude levels, visibility, concise effects of different wind strengths – the peculiarities of aerial combat are well addressed in sufficient details – from balloons to flying carpets and floating fortresses, this chapter adds the third dimension to mass combat – war rockets, solar sailors – every companion of the firmaments-using campaign should consider this the way to add mass combat to their arrays – glorious! (Be honest – you always wanted to fight dragons while aboard a war rocket!) And yes, this does provide full DVs, cover, dmg, stall, crash etc. values – and if that doesn’t mean anything to you by now, then only because you don’t have the pdf before you – the system is ridiculously easy to grasp and concise in its presentation.

Easy to grasp stats for vessels with drift speeds or those being able to climb altitudes, hovering etc. – all here and supplemented further by 12 unique tactics – from soaring sweeps to dogfighting and strafing runs, aerial combat has scarcely been this awesome and tactical! Now, of course this opens a whole new field – i.e. the combat of earthbound units versus airborne assailants – and from options like digging in to using grapnel shots, a whole new dimension, literally, is added to mass combat. Now if that isn’t yet enough for you, let’s take a look at yet another expansion – the one to the sea. “But wait, EZG,” you say “I already have 3 systems for naval combats to choose from and didn’t you say that Frog God Games’ “Fire as She Bears” was absolutely awesome? Yes, I did, and I still consider the system the best naval combat system available for any d20-iteration. However, we’re not talking about skirmishes between a couple of vessels, we’re talking about the clash of whole fleets! And for that, well, let’s just say that the rules herein apply the same thoroughness to naval warfare as to that in the skies – depth zones (which allow for submarines and magical threats), wind effects and naval units…ask and ye shall find herein. By the way: All you require, once again provided in detail including required buildings to procure them (forgot to mention that regarding aerial units – yes, when used with kingdom-building, required buildings etc. are provided!) alongside massive tables of sample vessels in one handy tome. Want to know the level of detail these rules support – the difficulty of fighting back once your vessel’s been sunk may impose a massive penalty, but it doesn’t mean that your unit can’t take down a hostile ship.

Which also becomes relevant since the system utilizes one unified frame of rules. Why is that important? Let’s say a unit of sahuagin on board of a balloon has attacked your galley; You manage to put down the balloon and it crashes into the sea – you can continue playing all levels of combats like that with one single system. Want to play the fantasy-equivalent of the D-Day? Go ahead, these rules have you covered! Now while there is bound to be some overlap with the aerial tactics, I should not fail to mention that naval combat also receives quite an array of unique, naval tactics that add even more options to the fray.

Now sooner or later, assault on fortifications is bound to happen – and if you ever tried to use ultimate combat and campaign in one and the same campaign, you may have noticed some discrepancy there – instead of assuming abstract siege engines to be a part of a given unit, we receive a special, Knowledge (engineering)-and int-based LB to determine how commanders of units of artillery work – which makes MUCH more sense and allows for generals to specifically target these weapons…

Speaking of strategies – the array of ranged and close-quarters siege weaponry and the vast array of associated strategies, from bombardment (e.g. via smoke, plagued corpses, etc…) to infiltration and scatter volleys makes for a superb selection of choices – even before the 7 new magical siege weapons – like apocalypse zombie siege shots, adamantine rams or ooze-siege shots – glorious!

The pdf also comes with a neat index of the tables for quick reference and it should be noted that perfect rules-synergy with Ultimate Campaign, Ultimate Rulership and Ultimate Battle is maintained.

Conclusion:
Editing and formatting are top-notch, I didn’t notice any significant glitches. Layout adheres to legendary Games’ two-column full-color standard with awesome full-color artworks. The pdf is relatively printer-friendly and comes fully bookmarked for your convenience. The pdf also contains the good type of hyperlink, making the rules presented even easier to grasp.

Jason Nelson took a *long* time making this final piece of the triumvirate of expansions and refinements to Paizo’s kingdom building/mass-combat system (which he also wrote, just fyi). It is not a big surprise then, that the resulting books, unfettered from the limitations of page-count and relative simplicity, have been an utter BLAST to read and use. Offering options to get rid of some overly generic simplifications of the base system, the first two books were beyond superb and managed to add so incredibly much to the base systems I never, ever want to play kingdom building and mass combat without their options again.

Now the thing is – Ultimate War was pending and its task was to close the final gaps and cover the true clash of armies, remembering all the small modifications AND refining the base system. I’ll make this short:

If you even remotely plan to run mass combat BUY THIS NOW. The additional options, even if you use neither aerial, nor naval or siege combat, are GOLD: The fact that they work perfectly together makes for truly dynamic mass combat. the vast expansion of boons and tactics translate to mass combat that is infinitely more exciting, strategic and ultimately fun. Now it’s perhaps due to approximately 15K points of warhammer miniatures in my attic, but I expect some tactical options from a given system and Ultimate War’s expansion fits the bill perfectly – indeed, the variance and peculiarities of aerial combat and naval combat allow for a finer gradation in these areas.

The most impressive component of these rules, beyond their modularity and synergy, though, would be the fact that this one system supports not only all those particular special cases, it allows for transparency and overlap between them – ships that can turn aerial? Why not! Cadres of wyrms rising from the waves to take to the skies, then land and wreck havoc among the elven archers?? Go for it, with this book, you can properly portray that – and the dogfight between the draconic assault and the giant eagle riding knights in the air! The assault of the gnomish submersible-riding saboteurs on the siege-weapon bearing frigate. This book is glorious, a must-buy for everyone who considered the base rules of Ultimate Campaign too simple, too rudimentary – with this, you could conceivably play a thoroughly compelling, interesting, strategic CAMPAIGN of warfare – and honestly, I’d probably have a nerdgasm if Legendary Games released a full mass combat-AP using these rules. For now, I have to plot, devise strategies and generate *a lot* of adventure material; I just have resolved to up the emphasis on war in my current campaign!

This book is brilliant, a worthy successor to its stellar companion books, and well worth a final rating of 5 stars + seal of approval + nomination as a candidate for my top ten of 2014. An absolute must-buy-level tome and one that also receive the endzeitgeist essential-tag as one of the must-have tomes for a campaign!

You can get this epic book here on OBS and here on d20pfsrd.com’s shop!