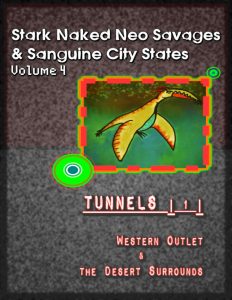 The fourth installment of the Stark Naked Neo Savages and Sanguine City States series clocks in at 33 pages, 1 page front cover, 1 page editorial, 1 page ToC, 1 page back cover, leaving us with 29 pages, laid out for 6’’ by 9’’ (A5), so let’s take a look!

This review was moved up in my reviewing queue via a direct donation to make this a prioritized review.

As far as rules are concerned, this supplement can be labeled OSR, but it does not subscribe to a single rules system; it notes HD; AC provides an equivalent armor (like “as Chain”), damage is noted with the usual dice, and skills follow the x-in-6-style. As a whole, the content tends to gravitate towards the lower power-levels, and is mechanically not complex enough to render adaptation problematic.

Now, as a bit of a recap for the series and its context: #1 was a pretty misery-porn-ish supplement, but interesting first offering; #2 went fully into the poetry-as-game-text angle, and focused on poetry and outré, genuinely evocative concepts, but was lite on the gaming text side. #3 was a bit crunchier than #2, but also less out there. Still, as a whole, the series developed from stark, despondent nihilism towards a more palpable form of melancholic sadness, and, yes, wonder and even humor. This supplement continues this trend, and it is here that the poetry-as-game-text angle comes into its own.

It should be noted that, as the supplements before, this supplement does contain sexual content, namely treasure caches that are sex-toys. I considered that to be hilarious, but if you and your group are on the prude side of things, it’s something to be aware of. The supplement otherwise isn’t explicit regarding violence per se, but does use expletives.

In case you’ve dismissed the series so far, a brief recap: Essentially, we have a very strange post-apocalypse here; TVs and things like that exist, but the apocalypse that stuck is one that I’d label as “obscure” – “space and time”, to quote the pdf, “are no longer friends” and the static of a TV screen may well be haunted by a draconic predator. It feels like an acid trip vision of a world turning Slag City-ish aesthetics into fantasy, with the text itself remaining colloquial, funny even at times. The primary leitmotif, though, is one of a pervading sadness and of a world that has moved on. If the world of Stephen King’s “The Dark Tower” had used our world as a baseline instead of an Arthurian Wild West.

The supplement provides an introduction to the eponymous tunnel, as well as 4 different hooks for the party to go there, and a random encounter table. The supplement also has a neat Desert Folx generator: “How they nomad”-tables include entries like “crazy fucking drill”, for example. We have “How they dress” tables, “How they fight,” “How they survive” and “How they interact.” A treasure hunting generator is included alongside some interesting encounters, which include unique hazards: Yellow-toothed birds using flyby-attacks; friendly frogs might follow you…or, well, you might become stuck in the muck.

Beyond these general components, the pdf also includes essentially a sandboxy environment (including tables for digging up stuff), supplemented by maps presented in .PNG-format. A global map of the setting is provided alongside a version of the map for the tunnel entrance and its vicinity, which is included in a version with and one without grid. Really cool: Beyond those, we also get maps of the “more fleshed out” area – essentially a kind of module. These maps are player-friendly, and while they have no grid, I was super-happy about the fact that we got them – in the age of social distancing, having these is doubly appreciated, and putting a grid on them is simple enough.

Anyhow, to discuss the more fleshed out areas and remainder of the pdf, I will have to dive deep into SPOILER-territory. Potential players should jump ahead to the conclusion.

All right, only GMs around? Great! So, there is the “Mesa Circle Trailer Community”, also known as “Shining Crown Hill” – here, near the massive concrete ditch known as “The Cut”, strange, perpetually happy kids, all boys, seem to take care of 4 chrome trailers and a smoldering wreck; in shorts and polo shirts, the sweep the asphalt in the blistering heat of the day, always smiling. They do this for their aunt, gesturing to the destroyed trailer. Longing for spaghetti they will never again taste. The trailers hold entrances to connective tunnels, where food machines remain; guest account and password information is provided; how and whether these can be obtained is up to the GM. They have personalities, when not sweeping. They might turn violent, their skin concealing chrome….and in one trailer, a homage to the video-game nasty/horror-satire “Harvester” can be found with Queen Wasp and her, to quote the pdf, “Mixed Swarm of Angry Bullshit.” This consists, btw., of big wasps, centipedes, and a bunch of stoned-looking mice. Look into the wrong fridge, and a toothpick lizard might fire at you – but hey, all that danger notwithstanding, this place has food, water, etc., so it might make for a great homebase. So yeah, trailer-park dungeon. AWESOME.

Also because…well, at night HE hunts – the Dread-Great Spearface, terrible in its bioluminosity; its stats and description are spliced into the trailer park description, and I wished it’d have been in one place. Anyway, when the players are done mucking through the grime near the entrance to the tunnel, they may well run into the perpetually-smoking artist robot, who needs YOU to explain what his art means, reacting in delightfully exaggerated ways. And yes, the canvas he has (infinite ones are provided by a paradox) is depicted. How he reacts is based on a Charisma-modified reaction roll, accounting for how the interaction went. Oh, and here’s the weird-sad component – he won’t remember. The version of him that met you before? It never existed. “It’s complicated.” As a minor nitpick: Getting stats for the artist would have been nice.

See what I meant by that subtle sense of sadness? I absolutely love it. It’s like mono-no-aware in the post-apocalypse. A gentle awareness to the sadness of things passing.

Conclusion:
Editing and formatting are hard to rate in this pdf, as contractions, uncommon phrasing and orthography etc. tend to serve a function; same goes for fonts, which range from pixel-style oones to more conventional ones. My one formal complaint would be the missing statblock for one NPC. Artworks are weird, surreal full-color pieces with a neon aesthetic. The pdf has no bookmarks, which is a comfort-detriment, but it *is* hyperlinked: Each non-artwork page has a button-style semi-circle at the bottom that returns you to the ToC. The cartography is in color, obviously hand-made, and just as weird as the artwork – hard to rate. It looks a bit trashy, obviously, but that actually works in its favor in context of this supplement. The inclusion of player-friendly maps (HECK YEAH!) is awesome and somewhat makes up for the lack of bookmarks. Two thumbs up for that!

Evey Lockhart’s fourth installment in the series is pretty damn awesome as far as I’m concerned. I like long-form poetry and am a pretty big fan of Beat poetry; as such, the rhythms of the text, the cadences that almost beg to be read aloud strike a chord with me.

However, more so than any installment in the series prior to this one, this is easily used in games; you can run this with minimum preparation, and even if you couldn’t care less about the poetry angle, you get a truly unique vision here. This is a genuine jamais-vu-experience for me; in all my years in RPGs, I haven’t seen a *SPOILER*-dungeon, much less one executed in such an interesting manner.

This is a wonderful supplement, its spirit hailing from the forgotten places of the US, oozing Americana in a way that reminded me of some weird self-published books by locals I purchased during my first roadtrip in the middle of nowhere. If this is the direction for the series, let it be known that I’d back a big hardcover for the setting in the blink of an eye. I adore the atmosphere, how easily the new installment can be used, the synthesis of gaming and poetry that works so much better here than in e.g. “Furthest Farthing’s Frog-Pond of Existential Ennui.” Is this perfect? Now, but it is an uncompromising auteur vision that will net you at least one or two sessions of strange bewilderment and WTFs. It is sad without ever stooping to the levels of misery, and in its raw and deliberately garish components, manages to become beautiful in a way.

This is hard to rate, but honestly, I do think this is worth giving a shot – my final verdict will be 4.5 stars, rounded down, but this does get my seal of approval for its jamais-vu components.

However, if you take a look at the price, you’ll note that it clocks in at $5.00; it struck me as odd, as this used to be PWYW.

There’s a reason for the price-increase, and it’s most assuredly not greed. The author has, time and again, made all her works available for PWYW for those screwed by the system, or for those that have fallen on hard times. (And yes, this has included me in the past. I distinctly recall drawing solace/enjoyment from one of her pdfs while totally broke.) Now, at least according to my cursory social media research, she has hit some hard times. So, if you want to support the author, this is good time to do so. I do think she deserves the support. I most assuredly hope that these supplements continue. I want to see more of this unique and strange vision, and I fervently hope, so do you.

This used to be available on OBS, but it has been removed, alongside the author’s other works. You can still find it here on itch.io, and I recommend getting it, while you still can.