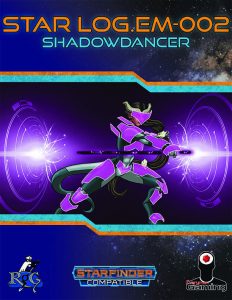 This little expansion for Starfinder clocks in at 6 pages, 1 page front cover, 1 page editorial, 1.5 pages of SRD, leaving us with 2.5 pages of content, so let’s take a look!

All right, so archetypes in Starfinder have been streamlined, which makes them, per definition, more flexible – as such, this concept does benefit the relatively broad theme of the shadow dancer, which never thoroughly felt right as something limited to rogues, at least to me. The Shadowdancer presented herein grants alternate class features at 2nd, 6th and 9th level, with 12th and 18th level being optional choices.

2nd level provides Shadowed Sneak, which nets both Sleight of Hand and Stealth as class skills (or when you get one later as a class skill or from another source, a 1/day double roll, taking the better result). You also gain darkvision 60 ft. or increase its range by +30 ft. 6th level provides the option to use Stealth while within 10 ft. of an area of dim light as if you had cover or concealment, but you can’t do so versus creatures that easily can see in dim light – darkvision and low-light vision, for example, make this trick fail. 9th level nets shadow jump, which nets you 400 ft. +40 ft. per level in dimension dooring between shadows – the end and start of the teleportation must target dim light areas. You can bring along other willing creatures, but they take away from your daily allotment – the jumps must be taken in 40 ft. allotments, just fyi. This is btw a supernatural ability and as such, represents a standard action. You also gain Dimensional Agility as a bonus feat and treat the feat-tree’s spell-reference as instead pertaining to shadow jump.

What does that one do? Well, usually, it is restricted to 11th level characters and it allows you to act normally after travelling via dimension door as well as granting you a bonus to Armor Class against attacks of opportunity provoked from casting a teleportation spell. The feat stacks with mobility, but has its bonus reduced to +2, for a total of +6. Minor complaint: The pdf mentions AC here instead of Starfinder’s more commonly-used Armor Class term in feats, but since Bodyguard in the Starfinder Core Rules also uses AC, this gets a pass. There are three different follow-up feats for this one – the 12th and 18th level option allow you to choose follow-ups feats in the tree. Dimensional Assault lets you cast dimensional door as a full-round action – when doing so, you teleport twice your speed and make a charge attack with the usual bonuses/penalties. There are two different follow-up-feats for this: Dimensional Dervish Adds the option to just move your speed, but make a full attack instead when using Dimensional Assault; additionally, you may divide the distance teleported into increments before the first attack and all follow-up attacks and the end of the attack sequence – You must move at least 5 ft. each increment. Single attacks with bonus damage may also be thus used in conjunction with Dimensional Dervish. Dimensional Savant provides flanking from all squares you attack from, allowing you to set up basically flanking corridors – from after you make the first attack to the start of your next turn. This can be pretty damn cool, but warrants. Minor complaint in the feat-tree – the Dimensional Assault feat’s spell-prerequisite is not properly italicized.

There is one final feat here, Cloak of Shadows, which does necessitate 5th level and the 2nd level shadowdancer ability: 1/day, this feat lets you alter the illumination level within 20 ft. as a standard action towards shadows: Lights are dimmed, darkness brightened. Magic requires a Will-save to suppress thus, btw., and the effect is a supernatural ability and lasts for your level rounds.

Editing and formatting are very good – the only glitches I noticed were aesthetic. Layout adheres to the 2-column full-color standard of the series and the pdf sports a nice artwork. The pdf has no bookmarks, but needs none at this length.

Alexander Augunas’ shadow dancer is more interesting that he’d seem at first glance: For once, the fellow doesn’t work in darkness; you actually need dim light; on the plus side, the shadow jumping ability is bereft of the 4-Medium-folks limit of the spell, but…well, not often. Having additional creatures consume more of the daily resource is a solid trick here. Now, you will probably want a shadow orb and a proper light source fast, just to make sure you’re set up correctly. The attack options are potent, but in Starfinder, the changed attack action economy does help here.

All in all, I liked the shadowdancer as presented here – I’m not exactly in love, though Dimensional Dervish and Dimensional Savant are things I’d like to do to foes, at least once. In short: This is imho a good offering if you’re looking for a solid Starfinder shadowdancer. My final verdict will clock in at 4 stars.

You can get this neat Shadowdancer-archetype here on OBS!