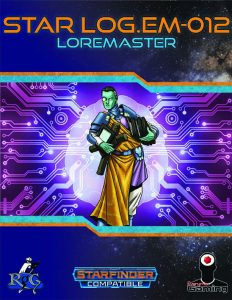 As always, we begin with a brief introduction and the meta-framework of accessing a database. The pdf represents another one of the classic concepts of d20-based gaming and converts it to SFRPG, this time around featuring the loremaster, one of the arguably most boring PrCs ever devised. I always liked the idea of the loremaster, but the implementation has never really touched me, so let’s see whether the Starfinder-version fares better!

Structurally, the loremaster is an archetype, and supplemental material-wise, we also receive 3 feats. Let’s start with these. Cunning nets you +1 skill rank for every character level you have and gain from there on out. Additionally, when making a skill check with a trained skill associated with the class’s key ability modifier, you add a +1 base bonus to the check. If you’re a multiclass character, you must choose one key ability modifier. The feat takes the peculiarities of Constitution into account. Now, rules-language-wise, this is interesting, as it employs Starfinder codifying base bonuses and providing a means to enhance your skills. I like the implementation here, but in the long run, I am a bit weary of skill boosts that, by their nature, can provide too much stacking. Now, this feat does not have an issue or the like, I’m just slightly cautious regarding the long run. Resolute Fighting is a combat feat that builds on Adaptive Fighting and allows you to spend 1 Resolve Point to use it again without having to rest. This is not an action. Studied Aim is interesting. After successfully identifying a creature with the appropriate skill, you may use the skill instead of your BAB for the purpose of determining the bonus damage caused by Deadly Aim. If skill and BAB are equal to your level, you increase the damage of Deadly Aim by +2 instead. The interaction with existing feats is precise and manages to find a use for skills sans falling prey to the cheesable aspects, and the damage increase this yields is held in check by action economy. I was really surprised to like this.

Now, the loremaster archetype grants alternate class features at 2nd, 4th, 6th, 12th and 18th level. The second level nets you a +1 enhancement bonus to all skill checks made to identify creatures or recall knowledge about them, and allows you to make the check untrained. Additionally, you add a skill from a list to your class skills. At 4th, 12th and 18th level, the archetype nets a Loremaster’s Secret, which is a bonus feat, limited by the fact that its prerequisites may not contain anything but skill ranks and ability scores, so no combat trees, advanced feats, etc.. The 6th level ability is called “Saw it All” and lets you choose 3 options, which may include a 1st-level connection power, a 2nd level envoy improvisation, mechanic trick, operative exploit, stellar revelation, magic hack or combat feat, except Adaptive Fighting. These still require that you have access to abilities the chosen options build upon. As a move action, you can gain the benefit of one of these for a minute. The ability may be used once per rest interval, and upon gaining a level, you may exchange one of the options chosen with another.

The pdf, as always, concludes with a well-written section that contextualizes the loremaster tradition in the Xa-Osoro system.

Editing and formatting re top-notch, I noticed no glitches. Layout adheres to the 2-column full-color standard of the series and the piece of artwork is nice. The pdf has no bookmarks, but needs none at this length.

Alexander Augunas’ translation of the loremaster had me surprised. I already confessed to my personal disdain for the PrC this was based on, and while the loremaster presented here isn’t exactly the most unique concept, it is still remarkable what level of identity the author has coaxed out of one of the most generic, milquetoast-bland concepts in d20. Contrary to my expectations, the loremaster presented here actually has some complex and interesting tricks – the Saw it All feature is wide open, but functional, and the material herein, as a whole, can be considered a success. Now, I still don’t like the loremaster much, but I can get behind this iteration, and that’s quite a victory. My final verdict will clock in at 4.5 stars, rounded up due to in dubio pro reo.