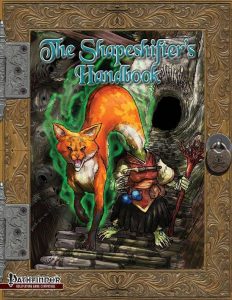 This installment of the Spheres of Power-expansion handbooks clocks in at 42 pages, 1 page front cover, 1 page editorial, 1 page ToC, 1 page SRD, 1 page back cover, leaving us with 37 pages of content, so let’s take a look!

After a brief introduction to the matter at hand, we begin with a new Monk archetype (compatible with unchained monks as well), the Beastsoul Monk, who gains Transformation instead of the usual level 1 bonus feat. (This would btw. be a feat that nets you access to a no-spell point cost alternate form). Starting at 2nd level, Hybrid Transformation and Improved Transformation are added to the bonus feats available. Transformation may be chosen multiple times, with each feat granting a new form. The archetype may employ natural attacks while flurrying, gaining Str-mod to damage with them while flurrying, but the monk loses the increased unarmed strike damage. The archetype may choose from a number of monk abilities and instead gain the Alteration sphere – to nitpick: The reference to the standard monk refers to these as ki powers, which is inaccurate. Unchained monks lose all ki powers in favor of the sphere. The archetype is a low caster, using ki instead of spell points and CLs don’t stack with Advanced Magical Training (not properly capitalized).

The second archetype would be the experimentalist thaumaturge, who gains the ability to generate casting attribute modifier vials, so-called alchemical boosts, which may be drawn and consumed as a standard action, granting temporary boosts to sphere-based casting, with the bonus scaling over the levels., but each time the boost is used, the character has a percentile chance of being nauseated. Additionally, such a boost nets the benefits of an Alteration sphere trait known, which are increased in increments of 5 levels. This allows for synergy with shapeshift and the benefits may thankfully not be stacked. This replaces forbidden lore. 2nd level yields the option to preserve and consume the remnants of dead creatures, allowing for either the disguise as the creature or mimicking of its abilities – by choosing an appropriate sphere talent. This is pretty much wide open and would really have needed imho a table of sample correlations between critters and sphere talents – could e.g. a creature with lunge grant the thaumaturge pounce? Am I missing something? Both are options of Bestial Reflexes, after all…The maximum cap of samples that may be preserved is increased at 6th level and every 4 thereafter and a handy sidebar allows for alternate dressing for anyone not comfortable with the potentially cannibalistic implications of the option. The archetype, unsurprisingly, gets the Alteration sphere with either Lycanthropic or Fleshwarper as drawback and 3rd level and every 4 levels thereafter net alchemist discoveries instead of invocations. Instead of bonus feats, they gain the option to choose sneak attack instead of an alchemist discovery.

The protean shifter gains the Alteration sphere and the Beast Soul drawback with Anarchic Transformation, which is gained as normal. This modifies shapeshifter and the archetype gains breadth of form, which lets you, as a standard action, grant yourself an Alteration sphere talent you did not have, provided you meet the prerequisites. This lasts only temporarily and thankfully has a hard daily cap of 3 + 1/2 class level uses per day. Multiple uses do not stack and 5th level yields 2 talents, or the option to select one as a move action. The action economy improves throughout the levels, at 9th and 17th level, with 13th level increasing this all to 3 talents. Instead of endurance, 3rd level nets quick transformation. This is pretty wide-open and potent – not an option I’d allow in a gritty game, but suitable for most.

The second shifter archetype herein would be the warshifter, who gains the Lycanthropic drawback in conjunction with the Alteration sphere. They add Acrobatics to their class skills gain access to 3 maneuvers from Broken Blade, Primal Fury and Thrashing Dragon and has 3 maneuvers readied at first level, 1 stance and increases that to 15 maneuvers known, 7 readied, up to 5 stances and maximum maneuver-level of 6th. This replaces the transformation-tree of abilities and bestial traits. Yes, you read right – this is a Path of War/Spheres of Power-crossover archetype. Personally, I think the systems don’t blend too well and the archetype uses two of my least favorite disciplines, but your mileage may vary.

The Resizer mageknight archetype loses medium armor proficiency (which is not bolded properly) and gains Size Change of the Alteration sphere, treating class level as CL, lasting for 2 rounds + 1 per level – and the resizer may choose to reduce the number of traits gained from shapeshift to retain use of the ability while subjected to it. This replaces 1st level’s magic talent. At 11th level, this may be used as a swift action sans paying spell points and may be used at the cost of one spell point as an immediate action, replacing mystic defense.

2nd level lets the character ignore size penalties when changing sizes and is treated as mystic combat, but replaces it. 7th level nets permanent size changes. 15th level nets further size increases, allowing the character, with the right talent, to become gargantuan, with the right advanced talent even Fine or Colossal, replacing draw power. The mystic combat options net you grab and allow you to beat foes to pulp with their buddies, which is pretty cool and generally concisely-presented. I am not sold on this one: Size increases can be incredibly potent and the lack of costs at high levels and ridiculous sizes can be pretty problematic in some games, particularly sans the penalties. Not in all games, mind you, and I can see this work well for some campaigns, but it is an archetype that requires some serious GM-oversight and player mastery.

We do gain 3 arsenal tricks that tie in with the new wild fang property, summon morphic weapons as Grafted ones, and add wild (see SoP) to summoned armor and shields. 8 bestial traits cover temperature adaption, better spider climbing, grab, grafted weapons, better jumping…and Leaping Attack,. which is OP: Jump as part of a charge – if you clear the target’s height (which is NO issue, considering how far you can boost such checks…), you treat it as flat-footed and increase threat range – worse, the threat-range increase stacks, which is a violation of how such things usually happen. I’d strongly suggest banning this. Shaping limbs into weapons and growing spines are neat tricks.

Graft Weapon is also available as a Mystic Combat option and we get better grappling, silvered weapons (and spell point auto-crit confirming versus polymorphed creatures, which BEGS to be abused to smithereens…) as well as the option to cancel out shapechanging via spell point empowered attacks.

The third chapter is massive and includes a ton of really versatile Alteration sphere talents – Aberrant Body, for example, unlocks acid spit, flanking immunity, an aboleth’s mucus cloud (airborne, potentially choking foes – though thankfully, that can be offset by cleaning the mucus!) and roper strands. Aerial Agility unlocks Hovering, improved maneuverability and wingover as options. Agile Transformation nets +2 dodge bonus (Notes stacking with other dodge bonuses – which is redundant; dodge bonuses stack with each other.), Evasion (not italicized, which it should be in this context), +4 initiative (ouch) and uncanny dodge (improved if you already have it). That’s, again, one talent. We can go through the whole chapter this way – we get aquatic tricks, ooze tricks, etc. and even find swarm transformations here. Now, the base SoP’s Alteration sphere justifiably is considered to be one brutal array of options and this further enhances that – if you’re looking to make a deadly shifting character, this one will yield enough material with the versatile traits available for each of the talents. Comparable spheres will certainly look with unmitigated envy at the potent options here and a player with sufficient system mastery can make some truly frightening builds here.

The advanced talents chapter allows these options to be further enhanced – diffused swarm forms, energy immunities and vulnerabilities, fusing two creatures into an amalgam, regeneration, the Size Mastery talent that allows for further size control or Star-spawn Transformation allow for potent tricks. All in all, a nice chapter for the more high-powered campaigns.

The pdf also sports 3 incantations – one to permanently fuse two creatures, one to make shapechangers and one to reconfigure the flesh of a target. Big plus: The Adaptation-section provides guidance for generating your own content within the confines of the Sphere, using the platypus as an example. The feat chapter sports aligned attacks as soon as 5th level (which is too soon), free counterspells when initiating a grapple (cool: Gets interaction with anti-grapple effects right), feats that help with Fusion tricks, Cursed shapeshifts, high-level grapple/swallow whole synergy, reflexive disarming transformations, Disguise shifts and retaining some tricks while under Transformation. A tree for Two-Head-enhancements can be found and we do get the option to spit venom, reflexive poison ichors…pretty extensive array here.

The pdf does sport 3 nice drawbacks as well as 4 traits and 14 alternate racial traits for a variety of races beyond the core. The equipment section contains a lycanthrope hunter’s kit, oil that helps against shifters, an iteration of the transformative wolf pelt and a stabilizing vest. The 7th chapter provides advice on handling shapeshifting in game (kudos for the inclusion!) as well as handy tables that correlate creature types and form talents as well as form talents and casting abilities.

Editing and formatting are good on a formal, rather impressive on a rules-language level – while I noticed a couple of formatting glitches and hiccups, more than usual for the series, the complex rules-language and operations required have been handled rather well as a whole. Layout adheres to the two-column full-color standard of the series and the pdf uses a blend of nice original pieces and stock art. The supplement comes fully bookmarked for your convenience.

Andrew Stoeckle’s take on shifters should put a smile on the faces of players, particularly those who enjoy tinkering and optimizing the material: The already extremely impressive array of options of the base sphere has been significantly expanded by this book, adding a serious array of versatility to the arsenal of options herein. This should be considered to be a must-buy for any fan of the Alteration-sphere, though GMs should talk with their players about some of the combos herein: The sheer versatility of options allow you to make truly fearsome shapechangers, to the point where they may be a bit overbearing for more conservative campaigns.

That being said, this pdf should most certainly be considered to be a required purchase for fans of the spherecasting engine – as such, my final verdict will clock in at 4.5 stars, rounded down for the purpose of this platform.

Want the combo with Hero Lab-files? You can find that here on OBS!

You can directly support Drop Dead Studios making more of these fun supplements here on patreon!